About 140 residents of Senate District 38 crowded into a meeting room on the second floor of the Eagan Civic Arena last night. They filled rows of folding chairs, leaned against walls and lingered in the back of the room, hoping for answers from their legislators about the state government shutdown.

The lawmakers’ no-show did little to reassure constituents on hand – mostly union members, including some state workers laid off as a result of the ongoing shutdown – that compromise is in the offing at the Capitol, where budget negotiations between Republican legislators and DFL Gov. Mark Dayton have been deadlocked for months.

“I know negotiations are not the easiest thing to do, especially when money is tight,” said Eagan resident Duane Butorac, who works for the Minnesota Department of Transportation. “My question to my representative is, where is the art of negotiation when it’s my way or the highway?”

In the lawmakers’ absence, constituents like Butorac posed questions to a video camera. Organizers pledged to send copies of the recordings to Daley, Anderson and Wardlow.

Questioners remained mostly civil. Some were snarky; others were somber.

Department of Public Safety employee Lou Powell expressed concern for non-profit organizations that receive funding from the state to carry out vital services. Powell said she has heard from crisis nurseries, battered women’s shelters and centers for victims of sexual assault, already struggling to stay open without state funding.

“They’re saying to me, ‘How can we serve these people when the victims don’t stop coming?’” Powell said. “Their employees live paycheck to paycheck just like we do. They’re talking about shutting their doors.”

Most constituents pleaded with Daley, Anderson and Wardlow to put aside their anti-tax ideology and compromise with Dayton, who has insisted on protecting vital public services by raising taxes on the wealthiest Minnesotans. 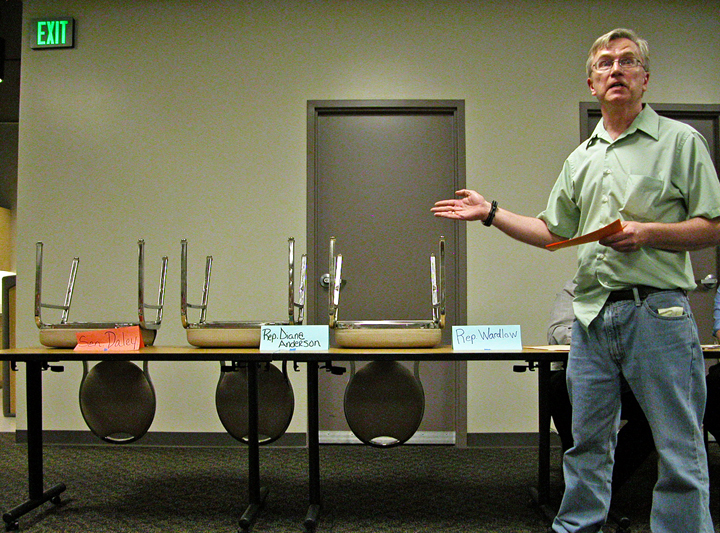 Republicans have rejected any compromise that includes a tax increase, claiming it would put Minnesota’s businesses at a disadvantage and stifle job growth.

“Taxes are the lowest in this state and this country that they’ve ever been,” Bowman said. “We should be rolling in clover right now, but we’re not.

Another Eagan resident, Greg Skog, called the shutdown a “sick game of ‘Survivor’” that Republican leaders are playing.

“They have the money to survive this, and they know they can outlast the rest of us who don’t,” said Skog, a member of United Food and Commercial Workers Local 1189.

Organizers of the event urged constituents to turn their frustration into action by signing up for a door-knock in District 38 over the weekend.

Lynn Wasvich, who lives in Eagan with her husband, a state employee, took a longer view. Pointing to the three empty chairs reserved for Eagan’s state representatives, she said, “When it comes to November, let’s vote these three out.”