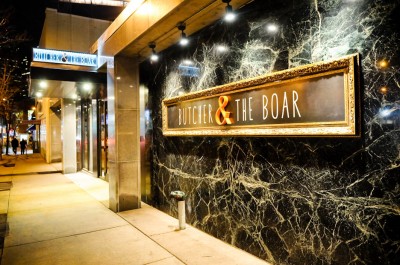 I know I know. Why is there a review of Butcher and the Boar on TC Jewfolk.com? Why would this awesome Jewish website publish a review about treyf — one so blatantly offensive to the Kosher mafia?

Well, the answer is simple. Some Jews just like good food. I’m one of them. No apologies necessary.

Everyone and their mother has been talking about Butcher and the Boar since it opened last year. It has garnered attention both locally and nationally — making it extremely difficult to get a reservation. And being named the Star Tribune’s Restaurant of the Year for 2012 didn’t help the cause. So it pained me that after almost a year, I had yet to experience this Mecca of meat. I was equal parts excited to taste what everyone was talking about and fearful that it wouldn’t live up to the hype.

Well, I’m very happy to report that Butcher and the Boar is the real deal – and the hype is completely justified.

Firstly, it’s really great to see a place in town that’s busy all night long — proving that it can be done here. It also proves that if you have the babysitter meter running, you can actually go to an early movie and have a great meal afterwards.

Secondly, the food is just plain awesome and I barely scratched the surface. But I’m no Zimmern, so I’m not going to order the wild boar head cheese or the stuffed pig’s foot. Let’s just get that out of the way.

Thirdly, they have a great beer list with tons of interesting options. Unfortunately, I’m not a fan of bourbon, but if you are, then go here. You won’t be sorry. And to be honest, I think next time I go, I’m going to give bourbon another chance.

Fourthly, they respond on Twitter and don’t take themselves too seriously. Mensches for sure.

Now to the food… 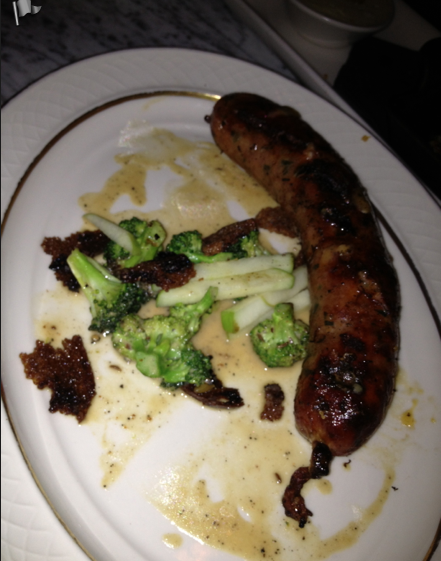 Right: Best sausage I’ve ever had

The Berkshire Pork and Cheddar Sausage with broccoli, rye, and hard cider sauce

Simply the best sausage I’ve ever had. For so many years sausages were comprised of scraps, of cheap fillers, and of mystery meat. Not this bad boy. You take one bite and you can taste the quality of the pork. The cheese makes it all come together, but it’s that perfectly seasoned meat that shines.

Lobster has become a little gimmicky — showing up in mac & cheese, in ravioli, and even at McDonald’s (in New England during the summer). So I was a bit hesitant here — wondering how they were going to pull it off. Silly me for doubting these guys. It’s definitely a knife and fork sandwich, so don’t even attempt to pick it up. Cooked in a cast iron skillet, this piece of gooey deliciousness doesn’t make a mockery of the lobster at all. The chunks of lobster float around in a Mornay-type sauce and when you add the egg, it becomes what could be, the perfect breakfast. 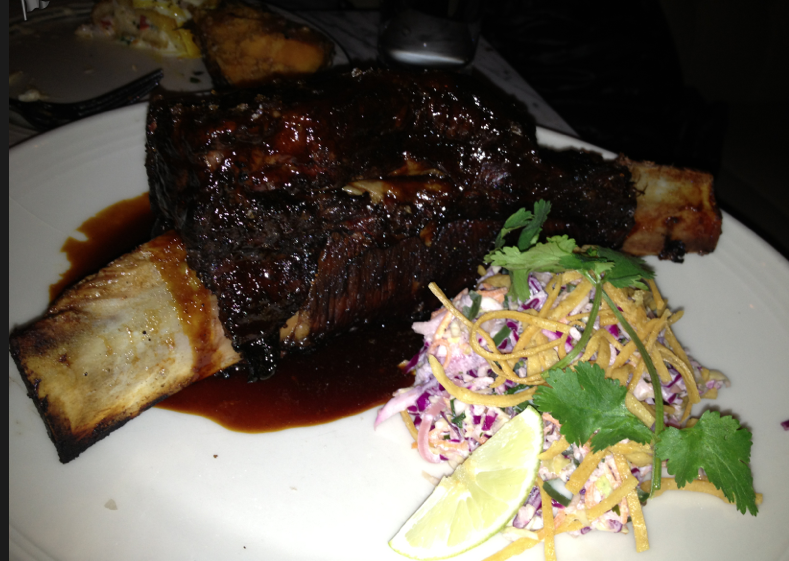 This is the one dish that everyone told me to get. While really good, it didn’t blow me away. It’s enormous and good enough for two to share, but it was awfully fatty. The sauce was quite spectacular and I would buy it if it was bottled. I’d put that sauce on just about anything. Not sure I would order it again.

Side dishes rarely get the credit they deserve, but this potato is quite something. It’s one of those things that you just can’t make at home — unless you have a coal fired oven. I know I don’t.

Out of 10, I’d give Butcher and the Boar a 9.5. It’s definitely that good, and I can’t wait to go back. (My birthday is coming up if anyone wants to take me.)