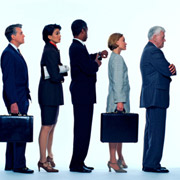 Recently released December unemployment numbers brought both bright and dismal signals for Minnesota and the nation. This much is clear: Minnesota’s economy is trying to recover, but state institutions are doing their darnedest to squeeze the life out of any glimmer of hope.

On the up side, Minnesota did outperform the nation in 2010, using December end-of-the year data. The state gained 29,300 jobs – a 1.1 percent growth rate for the year – while the national economy was up just 0.8 percent. Minnesota’s December unemployment rate was 7.0 percent, well below the nation’s 9.4 percent.

Despite these favorable comparisons, Minnesota still managed to lose 22,400 jobs in December as only the mining and logging sector actually had job gains.

State officials called the job losses “disappointing,” according to the Star Tribune. However, acting commissioner of the Department of Employment and Economic Development (DEED) Paul Moe said in a press release: “The state has recovered about 20 percent of the jobs that were lost in the recession. Temp hiring is up and new claims for unemployment benefits are down.”

That is a mixed report. But how the year ended should be our greatest concern, and give state officials and policy makers another reason to stop, think, and ask themselves how they might work to improve our economic outlook.

Logging and mining were December’s bright spots, gaining 200 jobs for the month and 600 on the year. Other major categories posted mixed results in 2010:

The types of work in some of these categories are self evident-construction, financial services (activities), mining and logging, for example. Other categories’ jobs are more complicated to describe, also industry groups are lumped together because government statisticians have been doing it that way for decades.

However, policy analysts understand the distinctions and more often than not, this data flow suffices. But in times like these, far more people should be looking at the numbers and should be considering how public policy adds and subtracts to precious job totals.

Take a closer look at the Education and Health Services category versus the Government category. DEED reported there were 467,784 jobs in Education and Health but 403,147 of them were in health-related fields. Remember the education component of this category counts only private schools and various private education services, which account for 64,637 jobs. It doesn’t include public education employees. They’re counted in the Government sector.

Almost all of the jobs gains in Health and Education came from the health side. And, DEED has projected, that will continue to be the case in the decade ahead.

In a study of occupations likely to add the most jobs in Minnesota between 2009 and 2019, personal and home care aides, home health aides, registered nurses and nursing aides, orderlies and attendants constitute four of the 10 fastest growing occupation sectors. Our changing demographics, especially the aging population, drive these projected job gains.

That study projected job gains of 88,430 from the top 10 occupation groups; the health related fields accounted for 55,224 of those jobs, or more than 60 percent of projected gains.

The other sector that needs a close look is Government. DEED said in releasing the December data that temporary workers for the November elections were a big reason for December’s reduction in government positions.

At the same time, this year’s faculty and staff cuts at public schools and colleges had already been made. When education job losses are piled on top of employment cutbacks by municipal and county governments, the Government sector has become a drag on the economy. Preliminary data for December show there were 410,300 such educators and various state and local public servants – a drop of about 2,000 positions since October and 7,000 fewer than in December a year ago.

DEED records show this comes after about 4,000 government sector job losses in 2009 that were evenly split between public higher education and local (K-12) school systems. Government employment totaled 418,066 jobs in 2008.

Two points should be obvious, but deserve comment. First, as the federal government has tried to stimulate the economy with programs that help construction and a number of other industry sectors, state and local governments have added to the problem by laying off people at the worst possible time.

Second, the shortsightedness of state fiscal mismanagement spreads to all sectors of the economy. The laid off Government/Education people were and are consumers. Is it any wonder that retailers, financial service providers and other business people are cutting employment after Minnesota’s state and local governments tossed about 11,000 educators and public servants out on the bricks in the past two years?

There’s a terrible price to pay for such policies. And it is getting costlier. An unknown but fairly large number of public servants and educational jobs were preserved in the short-term by federal stimulus programs. Those funds will likely disappear before the beginning of the 2011-2012 school year.