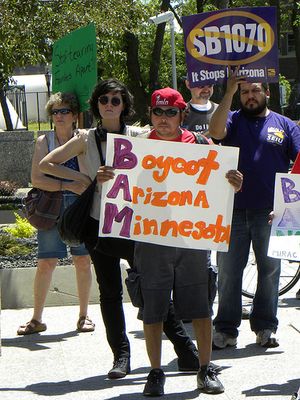 Very late on Thursday night, I posted MPR Midmorning: Has Tom Emmer had a change of heart on immigration policy?

A young activist asked a good question yesterday about bills Representative Emmer had supported in the past. In 2008, the not-so-distant past, Emmer signed on as a co-author for HF408, one of 15 Republicans who favored it. There was no Senate companion bill.

I’m beginning to learn how great a change of heart Emmer would have to have to support a “pathway to citizenship,” judging from past bills like HF408, however little he wanted to get down to specifics with Kerri Miller on Mid-Morning Thursday and however he may have sounded like he was modifying his position.

The short description of the 2008 bill:

There’s a lot more than having English as the official state language in that bill. Go read it. It doesn’t make an immigrant’s failure to carry papers at all times a crime, as does SB1070, but there’s plenty of interest in the 2008 bill.

Perhaps the most interesting is the basic premise, the findings:

3.2the integrity of various governmental programs and services.

This conclusion is at great odds with the way the question is framed in the conclusion of a recent U of M study for the Minnesota Business Immigration Reform Coalition:

. . .In fact, the question that the state of Minnesota and the nation should be addressing is what will be done if economic conditions and harsh immigration policies further reduce the number of foreign-born workers. As a number of researchers have demonstrated, the potential consequences are dire indeed.

A sharp contrast indeed. The report also found that immigrant communities tend to have low crime rates, regardless of their members’ documentation status.

Photo: A protest at the Whipple Federal Building on May 29.