More than 100,000 people packed the area around Wisconsin’s Capitol Saturday to continue a month-long campaign against Governor Scott Walker’s attack on worker rights. Participants included not only union members, but farmers on tractors, rock stars like the Foo Fighters and thousands of families carrying homemade signs and chanting, “This is what democracy looks like.” 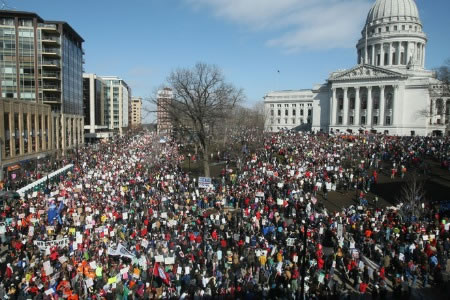 One view of the massive crowd at the state Capitol in Madison Saturday. (Photo courtesy of thinkprogress.org)

On Friday, Walker signed legislation stripping most public employees in the state of their collective bargaining rights. The measure was passed by the Republican-controlled Legislature after being removed from a larger “budget repair” bill that was stalled when 14 Senate Democrats left the state to prevent a vote.

The Democrats, dubbed “The Fabulous 14,” returned to a hero’s welcome Saturday. View video.

“The Fabulous 14 left Wisconsin because Governor Scott Walker gave us no voice,” said Senator Spencer Coggs of Milwaukee. “Thank you for being our voice while we were gone.”

The crowd, which some estimated as high as 150,000, included many Minnesotans. Unions sponsoring buses from Minnesota included Education Minnesota and the Minnesota Association of Professional Employees.

Before the speeches began, 53 farmers drove tractors around the Capitol square, to the cheers of participants.

The legislation signed by Walker strips most public employees in Wisconsin, including state workers, teachers and county and city employees, of their right to have their union bargain over benefits and working conditions. They will have very limited rights to bargain over wages.

Over the past month, protesters held many rallies in Madison and occupied the Capitol for several days. Unions, community groups and other opponents of the legislation also held rallies and other events in dozens of cities across the state.

Spurred by the attack on workers in Wisconsin and elsewhere, the national AFL-CIO has scheduled a Day of Action April 4, the anniversary of the assassination of the Rev. Dr. Martin Luther King, Jr., who was killed in Memphis, Tenn., while supporting striking sanitation workers.

While rallies are expected to continue in Wisconsin, the focus has shifted to the recall of eight Republican senators who supported Walker’s bill. Volunteers are gathering signatures and say recall elections could be scheduled by summer.

In addition, the Democratic Party and unions have filed court challenges to the Senate’s passage of the legislation, saying the Republican leadership’s actions violated the state open meeting law.

Opponents also are targeting Walker’s supporters in perhaps their most vulnerable place – the pocketbook. Last week, Madison Firefighters Local 311 President Joe Conway called on union members to withdraw their money from M&I Bank, whose executives and board members were among the highest donors to Walker’s campaign in 2010.

According to media reports, union members withdrew as much as $192,000 from a Madison branch of the bank in one day, forcing it to close early. 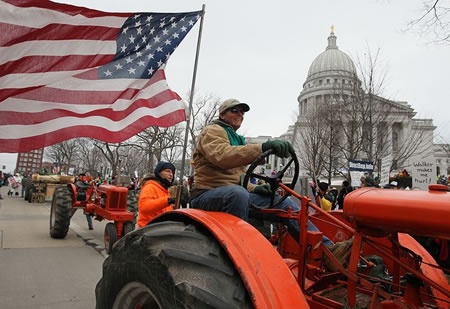 Farmers circled the Capitol in tractors. And demonstrators dresses as cows carried a message. 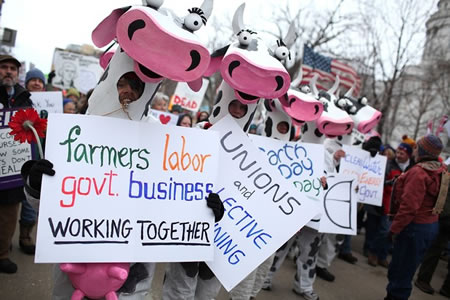