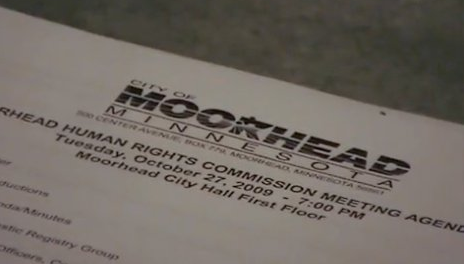 After sometimes angry and emotional debate Monday, the Moorhead City Council defeated an ordinance that would’ve created a domestic partner registry. Some at the council meeting said the registry of same-sex couples would reflect Moorhead’s inclusive values, while others warned it could lead to the breakdown of traditional marriage. “I don’t like queer relationships,” one man said. “Do you want the city of Moorhead to be known as a queer community?”

The largely symbolic ordinance, drafted by the Moorhead Human Rights Commission, has been in the works for months. The commission voted last November to approve the registry and send the issue to the city council. If passed, Moorhead would join cities like Duluth, Minneapolis and St. Paul, which have passed similar measures.

Many members of the Moorhead community spoke in support of the initiative.

“Speaking as a pastor in your community, there is no one definitive faith perspective on this issue,” said Mark Pettis, of First Congregational United Church of Christ. “The good of all is served when we act to affirm one another rather than continuing patterns that only serve to injure individuals.”

Small-business owner Mark Sinner said the creation of the registry “will shout inclusion and growth, creativity and progress.”

But others invoked Christianity in expressing their opposition.  Sel Nygard, who serves as a member of the Moorhead Human Rights Commission, said, “It’s not something that Christians believe in or should support,” he said.

“I think it’s just the next step to allowing gay marriages,” he added, calling letters to the editor of the Fargo Forum in support of the measure “trash.”

Resident Janine Hanson was concerned about the children. “I believe it’s unfair to married couples and I believe its send the wrong message to our youth.”

But perhaps the most incendiary commentary came from Moorhead resident Ken Lucier. Stepping up to the microphone in a shirt that read “Pray! Vote! Pray!,” he said, “If you want to have a man-man relationship or a woman-woman relationship you can have that. We may not want you living next to us, but you can do what you want. You have the liberty to do that.”

“I’m concerned that these nontraditional relationships, abnormal relationships… Abnormal is queer,” Lucier continued. “I don’t like queer relationships. Do you want the city of Moorhead to be known as a queer community?”

Council members Mark Altenburg and Diane Wray Williams both spoke out in favor of the ordinance. “I think this is a very, very small step, a symbolic step,” said Williams. “I honor their relationships.”

But the boldest words came from Greg Lemke, an openly gay member of the council. The argument that the measure would bring gay marriage to Moorhead is “bullcrap,” he said, adding that the city should remove signs calling Moorhead “welcoming” if the ordinance didn’t pass.

“It’s a pox on the city of Moorhead if we don’t pass this.”

The measure died in a 5 to 3 vote, with council members Luther Stueland, Nancy Otto, Dan Hunt, Brenda Elmer and Mark Hintermeyer voting against.