Mad Munchkin Productions (MMP) is proud to announce its new original work The Spooky Spectacular and Harvest Hullabaloo set to tour the Twin Cities metro area between October 19th and 27th. Designed to fit into garages large and small, the Spectacular-Hullabaloo is made up of two shows aimed at different age groups and will make a stop in Corcoran Neighborhood on October 20th. The production promises to be a rollicking good time and hopes to bring neighbors together through puppetry art happening in their own community.

“We conceived the whole project as a way to draw people together around an arts event,” says Artistic Director Laura Wilhelm. “We want to appeal to all ages–puppetry is for everyone!” In order to accomplish this task, the Mad Munchkin team created a wacky cast of monster puppets and then wrote two scripts for them. The Great Candy Caper is an all ages script. Aimed at 3-12 year olds, it follows a group of monsters whose annual Halloween Pageant is being sabotaged by a mysterious candy thief. The second script is a monster-filled riff on late night talk shows. Late Night With Pumpkin Headerman is complete with a ghost pirate comedian and undead musical guest. Both scripts use tabletop puppets and shadow puppetry, and each will be performed in Corcoran. The Great Candy Caper performs at 6:30pm and Pumpkin Headerman at 8pm.

“The second goal of our tour is to provide communities a way to serve those in need, and give neighbors time to enjoy each other before the winter sets in,” explains Wilhelm. The garage shows are all completely free of charge, but MMP asks that audiences bring non-glass, non-perishable food donations. In Corcoran, these donations will be taken to First Nations Kitchen. After the performance of each show, refreshments will be provided and the audience can mingle and meet the Mad Munchkin cast and artists.

The tour stop in Corcoran Neighborhood will be on Sunday, October 20th, with shows at 6:30pm and 8pm in the alley garage behind 2313 35th Street, Minneapolis, MN 55406. Street parking is available. Please bring a lawn chair or blanket to sit on and look for the Mad Munchkin signs. For those who can’t make it to the Corcoran show, check MMP’s website (www.madmunchkinproduction.com) for information about the 5 other tour stops as well as a special showing of The Great Candy Caper at In the Heart of the Beast Puppet and Mask Theater. 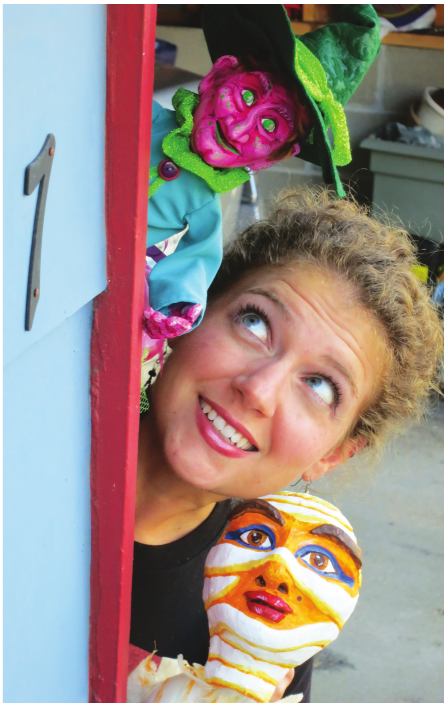 Founded by Laura Wilhelm and Alan Pagel in 2005, Mad Munchkin Productions produces originally written works fueled with visual imagery, action, and idea, as well as designs and builds puppets, masks, sets, costumes, and props. Other works include The Crooked Man, FREAKSOUT! , Stimulate THIS!, Eat My Zombie Shorts!, Snow Bound!, The Man Who Turned into a Fish, A Grimm Tale, and Paper Garden: Entomos.