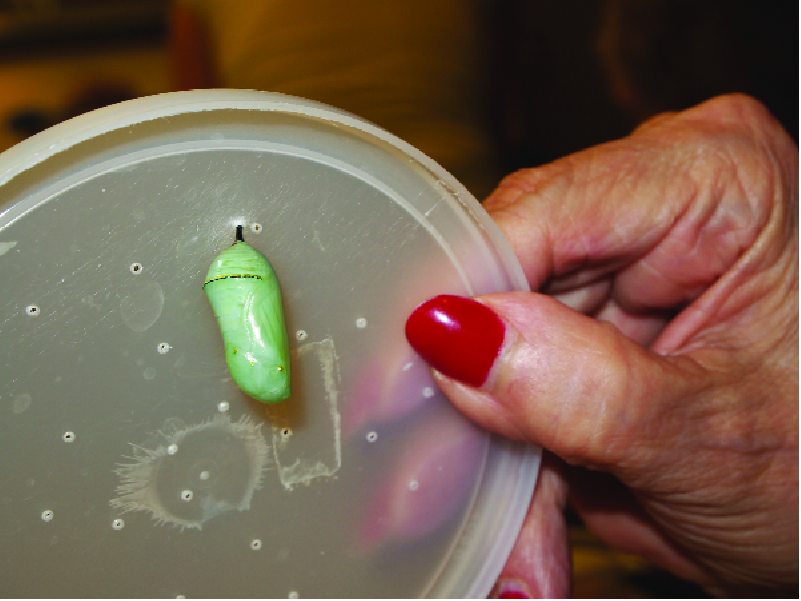 “You are all, at heart, scientists. You can figure this out by observation!”

Cindy Peterson’s voice modulates, she laughs a hearty laugh, her eyes flash and change. She flits from fact to fact like one of her Monarch butterflies, as she brings out ever more detail about these creatures, the fight to understand and preserve their Minnesota to Mexico migration, and her work with students. The St. Anthony resident teaches 7th and 8th grade science in Chanhassen; and as a volunteer, works with about 20 students in summer on the Monarch Larvae Monitoring Project (MLMP).

Recently, she brought live examples of the various monarch life stages (there are eggs and then five “instars,” the stages between “molts,” the shedding of skin) for a presentation at the St. Anthony Library. “My goal is to help you understand how to rear them if you choose, and how to recognize the species,” Peterson said.

She’s raised about 1,000 monarchs per summer, following her mentor Dr. Karen Oberhauser of the University of Minnesota Monarch Lab. Oberhauser, founder of MLMP, was recently selected for the White House Citizen Science Champion of Change Award. Meeting her 17 years ago was “a real career changing moment,” Peterson told the group. Oberhauser’s belief in “giving kids expertise and letting them investigate” was path-breaking, Peterson told the Northeaster. “She was doing ‘inquiry’” before it was a buzz word.”

Peterson co-taught with Oberhauser, who decided to devote part of her University of Minnesota lab to teaching teachers after seeing how her two daughters (who became scientists) were being taught; not so much to her liking.

Of 1.2 million species in the world, only 4,500 are mammals and about a million are insects. “One in three food items are brought to us by pollinating insects, and their way of migrating may be going by the wayside,” Peterson said. Monarchs are iconic, they’re distinctive, colorful representatives of the insect kingdom, and they connect Minnesota and other states with Mexico.

Peterson freely admits to using the beautiful and relatively fast- developing monarchs to get kids hooked on and fascinated by insects they used to think were icky. The monarchs go from egg to butterfly in about two weeks, and live as adults for up to six weeks, longer if they migrate.

The last generation leaves Minnesota in August, and though they are three or more generations removed, by instinct they know to travel 2,000 miles to a 60-square-mile overwintering area in Mexico. There, they spend the winters hanging together in a state of torpor (all systems slowed down) in the oyamel fir trees. Migratory monarchs live much longer than their descendants, who start returning here in spring.

Monarchs are threatened at both ends of the journey, as logging and tourism are starting to disturb their winter habitat. More civilization here means fewer wild milkweed stands—monarchs get nectar from all sorts of sources but only lay eggs and go through the instar stages on milkweed.

“Little gardens have a huge impact on bee population,” Peterson said, introducing me to her back yard garden. There, some common milkweed and swamp milkweed are growing, but most of the garden is other perennials (plants that come up every year). “Perennials such as bee balm, coneflower, and astilbe are friendly to pollinators. I’m not that much of a purist, not everything here is native to Minnesota,” but it grows here. She explained that annual plants have less nectar to offer; in many cases they are hybrids that won’t form true seed for a next generation. They don’t rely on insects to pollinate them, which would lead to the seeds.

To feed her monarch populations, she’ll find wild milkweed and refrigerate the leaves until ready to use, wash them to clean and re-hydrate before putting the leaves into the cages, or providing a stalk in a vase of water. Three flowering stalks of the most common variety would be enough to raise half a dozen caterpillars to butterfly over the two weeks.

The common milkweed spreads aggressively through an underground clonal rhizomal root system so it will pop up just about anywhere once it gets started. While Peterson is encouraging her milkweed to multiply, she’ll pluck the most inopportune plants.

Asked how large a milkweed patch would need to be, to attract monarchs, Peterson said, “We want to know what attracts them. Your data is used.” Peterson said citizen research is needed. “This year is a critical year because the population is so low, and it is the second year in a row.” Imagine emerging as the only butterfly in an area, how would you know where to go to find a mate? Monarchs only see light and dark and don’t have a lot of pheromones, they rely on chemoreceptors to sense where milkweed is, where potential mates might be.

If monarchs become extinct, it will be sad, Peterson said. If we lose bees (which are also having massive die-offs) it will be devastating. That’s why she maintains this research is very important.

A lot of Peterson’s students have gone into science, she said. Occasionally one will come back and admit they did not, “like a stake through my heart,” she jokes. “But they say ‘it’s okay, I’m writing about it,’ or in some related field. I just want them to be literate, and to enjoy nature,” Peterson said. “The analytical part is so important. Be critical, don’t believe everything you read that’s coming at you” however many miles per hour. Ask “where’s the evidence?”

See the websites www.plantmilkweed.org and www.mlmp.org to learn more about monitoring and preserving monarch habitat.

Participants at the library talk examined the stages from caterpillar to chrysalis. (Photos by Margo Ashmore)

Cindy Peterson shows how to hold a butterfly, not too tight, as they pump blood through delicate veins. (Photos by Margo Ashmore