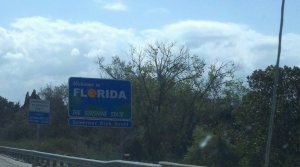 Last week I was traveling with my family. Picture 13 states in 9 days: from St Paul to Orlando and back. (Before you wonder at our map reading skills – we intentionally took a few detours.) I have never done a road trip like that – and most of our travel has been overseas – so I was a little worried. But it turns out that if you can find a driver and you have the technology, it’s not that bad.

We rented a minivan – so it felt like we had a lot of room for 5 of us. We also had 4 laptops, 1 iPad, 1 Droid, a couple of iPods and MiFi. Through MiFi, we had 4G Internet access most of the way. It was amazing. I’ve seen small businesses, and definitely some classrooms, that weren’t as well outfitted as we were.

It was interesting to see how well MiFI worked. To start, 2 days into the trip I got the email from my provider explaining that I had used approximately 75% of my monthly data allowance for the bill cycle. Ouch! Luckily they do allow upgrades. I also learned that one kid downloading one TV show can slow the network down to a crawl. (Also everyone got a lesson in download vs streaming vs downloaded from the hotel and viewed in the car.)

Also we learned that the MiFi worked almost everywhere – but definitely worked better closer to metro areas. I could not FTP from the middle of Kentucky – but get a few miles outside Atlanta and suddenly FTP is working again. So not all 4G is created equal, which led to another lesson (from Wikipedia)…

In 2009, the ITU-R organization specified the IMT-Advanced(International Mobile Telecommunications Advanced) requirements for 4G standards, setting peak speed requirements for 4G service at 100 Mbit/s for high mobility communication (such as from trains and cars) and 1 Gbit/s for low mobility communication (such as pedestrians and stationary users). …
Since these early standard versions support much less than 1 Gbps peak bit rate, they are not IMT-Advanced compliant, but are often branded 4G by manufacturers.

So where didn’t MiFi work? Between Madison and Tomah Wisconsin. It worked near the cities – but around Mauston is was radio silence. (One interesting note: I was in Alaska last month and tried getting online using a friend’s MiFi-type roving broadband connection and it didn’t work as well. Maybe that’s a difference in providers – or maybe Alaska doesn’t have the same coverage as the continental US.)

Technology kept us occupied – and kept me working. Making the point that really in today’s world you can work anywhere you can get broadband. But we used the technology to smooth our route too. We use GPS on the Droid with mixed results. It got us where we needed to go, usually. But it seemed to work less well in the mountains. And there were times when there had to a better way to get from A to B – unless suburban Savannah is the worst laid out area in the world – but again we got there. And frankly, it couldn’t have been any worse than me trying to read a map of different cities, especially after nightfall.

We also booked our rooms online (via Priceline) as we drove. We found fun places to eat via TripAdvisor. We posted fun pictures on Facebook to keep in touch with folks back home. (Which I think helps make the case that Robert Stephens made at the Blandin Broadband Conference 2 years ago – communities should be telling their stories online if you want travelers to stop in and visit. Folks who want help doing that should consider the University of Minnesota Extension business classes.)

So the good and bad news – being on a road trip no longer means being off the grid.