Cows graze in a pasture at Brian Hazel’s dairy farm Saturday in Lanesboro, Minn. Hazel and other Minnesota farmers will face challenges in putting their herds out to graze due to the unusually dry conditions since last August. (Photos by Mark Vancleave)

The rain from this weekend needs to continue if Minnesota cows are going to have enough forage to eat this year.

Forage is the term for the hay and silage that comes from alfalfa and corn that cows eat, and the drought that the state has experienced since August could hurt its growth.

“We need a big corn crop, and we need a good hay crop, and when we have drought, that really could be an economic challenge for cattle producers,” said Jim Paulson, a University of Minnesota Extension dairy educator.

The drought has affected every aspect of this interdependent farming system, and many involved said they hope it does not become a trend.

Extension climatologist Mark Seeley said many areas of the state are 9 inches below the precipitation average.

The second part of the growing season is usually the driest, Seeley said, so the fields need rain and snow at this time of year to build adequate subsoil moisture for the crops to use later.

With the unusually early onset of spring, many farmers wanted to plant early to increase their yield, said Liz Stahl, an Extension crops educator.

She said the Extension recommended that farmers not plant before April 21 because there was too high a risk that it would get cold again and hurt the crops — even with warm temperatures this year.

Hazel has already planted his hay forage crops and said he plans to plant the row crops like corn this week.

Farmers would expect four or five forage harvests in a year with these warm temperatures, Seeley said. But because of the drought, Hazel said he expects as few as two harvests.

When farmers harvest less forage, they have to buy more feed for the cows, such as corn.

But the production of ethanol has taken much of the corn and the land that cattle might use, according to Hazel.

Up to 40 percent of the corn farmed in Minnesota last year went to producing ethanol, Paulson said — about as much corn as animals usually eat in a year.

“It’s all about supply and demand, and when you take 40 percent to go to biofuels, it’s obviously going to affect supply, and that’s why we have $6 corn now, instead of $3 corn or $2 corn,” he said. 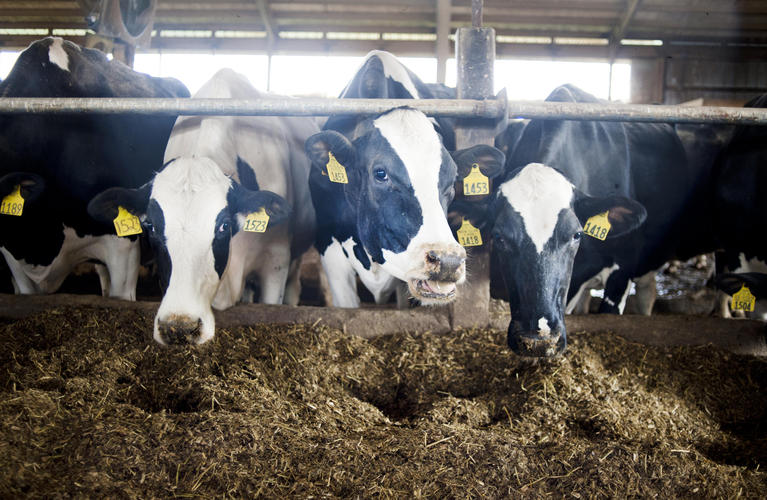 Cows eat feed in a barn Saturday on Hazel’s dairy operation in Lanesboro, Minn. Shortages in forage materials may mean farmers like Hazel will have to buy more expensive corn feeds for their cattle instead of producing their own.

Although the price of raw corn has gone up, farmers can feed the byproducts of ethanol to the cows, Hazel said.

Many byproducts that are unfit for human consumption are acceptable for bovine cattle to eat because they have  multiple stomachs to digest them.

“That’s the unique thing about cattle and why we like to see them in the landscape, because they are utilizing plant species that nothing else can use,” Hazel said.

Seeley said it was unlikely for a season like this to happen again.

The rest of the year could be good for dairy farmers if there is enough precipitation, said Stahl, but there are so many variables that it is difficult to make predictions.

Seeley warned against making many predictions at all.

“We shouldn’t make a statement that condemns the whole growing season,” he said.

“If we weren’t optimistic, we wouldn’t be farmers.”