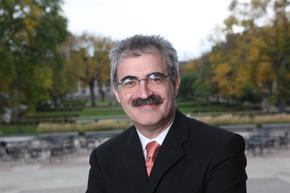 Steven Rosenstone will leave his post as the University of Minnesota’s vice president for scholarly and cultural affairs to lead the state’s largest college system. He was chosen by the Board of Trustees for Minnesota State Colleges and Universities on Wednesday as the system’s next chancellor, beating William Sederburg, commissioner of the Utah System of Higher Education.

At the University, Rosenstone’s office focuses on strengthening and supporting “scholarly, cultural and civic programs and events,” according to its website. He is also leading the $70 million renovation of Northrop Auditorium, a transformation that will increase on-campus student study space by 50 percent.

Now he’s set to take over a system that serves about 434,000 students and includes seven state universities and 25 two-year colleges – a system struggling with consistent state aid cuts and skyrocketing enrollment.

After he becomes chancellor Aug. 1, Kathleen O’Brien, vice president of University Services, and her team will take the helm on the Northrop renovation. University President Bob Bruininks said the switch will not negatively impact the project, and he expects construction to begin in March or April.

The University has not announced plans for his replacement and will leave the decision to fill the position up to President-designate Eric Kaler.

Rosenstone, who began at the University in 1996 as dean of the College of Liberal Arts, said he was also considered in this year’s race for the University president.

MnSCU’s gain is a “big loss” for the University, Bruininks said, but he’s convinced he will be a “strong, forceful and influential leader.”

“I think the board of MnSCU made a very wise choice.”

The debate over the two finalists centered on a divide between experience and vision. Rosenstone, who has never headed a college, is “a very risky choice,” MnSCU Trustee James Van Houten said.

Sederburg has served as president of two colleges and was seen as the more experienced candidate. But trustees repeatedly cited Rosenstone’s focus on innovation and creativity in his responses to the board.

“There’s maybe a little bit more risk but a greater return because of the capacity of this person to think big and do a lot of things,” Trustee Duane Benson said.” I think all his potential’s ahead of him.”

Trustee Phil Krinkie cast the sole dissenting vote. While Van Houten expressed his preference for Sederburg, he said he would vote with the majority to show support for Rosenstone.

In a seven-month process, the board considered 46 applicants for the position, currently held by James McCormick, before settling on the two finalists. The finalists faced interviews with system leaders Tuesday and Wednesday before the final decision was made.

Rosenstone stressed funding education both in his interviews and at a press conference after the announcement.

“We all know that Minnesota is facing some very tough economic challenges,” Rosenstone said. “But we must as a state continue to invest in our future.”

The system’s full-time equivalent enrollment has increased by more than 43,000 students over the past decade. In 2009, MnSCU educated more than 60 percent of Minnesota’s higher education graduates.

The MnSCU system is pinched by decreased state funding, which saw a steep drop starting in 2008.

State aid has dropped from 67 percent of MnSCU’s operating budgets to 43 percent since 2000, with tuition raises making up about 10 percent of the gap.

Bruininks said Rosenstone could handle the difficult budgetary situation and that he will “ultimately contribute to strengthening public higher education – throughout the state of Minnesota and beyond.”

Senate Higher Education Committee member Claire Robling said Rosenstone shares her policy and budget concerns. Robling, R-Jordan, called him a “visionary” and said he will bring some of the benefits of the University to MnSCU.