Growing up at the height of the Civil Rights Movement inspired Syd Beane, 68, to become a community organizer/community developer and fight for Native Americans. For nearly 40 years he traversed the country advocating for Indians and others invisible to those in power. In 1993, Beane moved to Minnesota, ending an exile imposed on the Dakota 150 years ago. From his charming, rustic home in Plymouth, MN, Beane talked about his career, his beliefs and the struggles Native Americans face.

Here is his distinctive Minnesota voice: (Scroll to bottom for audio and video)

Planting the seeds for change

I was born on the Flandreau Santee Sioux Reservation in South Dakota. My parents worked for the Flandreau Indian School. I grew up in a boarding school environment. Federal policy didn’t allow kids of parents at the boarding school to attend so we were bused to a public school in the small town. The Indian schools focused on trades. I was exposed to public education, which tends to be more eclectic. I think I had more opportunities to advance educationally and therefore end up with graduate degrees. If the policy had been that I could have gone to those schools, I may have gone the trade route.

Minnesota is my original homeland. My family was exiled from Minnesota in 1862 from the Dakota war; all Dakota were exiled. That’s what drove me, a certain sense of loss and anger. Wanting to understand the policies behind it, I started studying history and political science (in college). I understood American Indian policy was tied heavily to Arizona. I thought if I wanted to change policies pertaining to Native people, I ought to go where there’d be the greatest opportunity for me to interact with people involved with that policy.  I applied to graduate school at Arizona State University and got a full scholarship.

While I was in graduate school, I read books by Saul Alinsky–Rules for Radicals, Revelry for Radicals–and I got interested. Saul Alinsky was recognized as the founder of modern day organizing. I wanted to understand him. He had this institute in Chicago called the Industrial Areas Foundation. So I went there. I told them I was out of grad school and wanted to know what I had to do. They told me the first thing I had to do is unlearn everything they taught me in grad school.

I was the first American Indian to go into the Industrial Area’s Foundation longterm (18-month) program. But I didn’t know it at the time. It exposed me to the world of large scale organizing and the people who were central to the Civil Rights Movement, the anti-war movement and the feminist movement. All were sort of converging and Chicago was a hot bed for a lot of that organizing. It was a tremendous exposure to seeing things in a broader perspective  and understanding how we may think we’re doing things in isolation but we never are. Everything is organized, nothing is not organized. It’s just a question about where you fit.

The dominant paradigm today is one of separation. We separate ourselves by income, by gender, by race, by age. In the real world, there is no separation; everything and everyone is connected. Major institutions use that major paradigm to maintain there separation from each other and therefore create a world of polarization. this, to me, is the opposite of the way nature works. The natural law is everything and everyone is connected. Not that there aren’t difference, but we don’t have to use that natural separation to destroy. I think that polarization ultimately leads to destruction.

I understand how to polarize, I also learned that methodology. It’s modern politics. But survival is getting above that system of control and changing that paradigm back to one of no separation, no polarization. There is a political movement to do that. There are those who share that point of view. The question is will there be enough of us soon enough to reach what’s called that breakpoint where thought and ideas behind that become the dominant paradigm.

I think Obama, who’s actually an organizer from Chicago, understands that. That’s why he’s taking on all these issues–healthcare, the environment, the war–simultaneously. Some people say he can’t do that. But he has to do that because all the issues are the same. They’re all built on the same paradigm of polarization and control that ultimately leads to destruction. So you have to take them on all simultaneously in order to change the paradigm. I think he understand that.

Native Americans were basically a reservation people, although most of us live in cities. We were invisible because of federal policy. When other groups were brought into the city, they were put in defined geographical areas. It was the opposite for Native Americans this was out homeland. They didn’t want to put all the Indians together; they wanted to divide them. That’s why we don’t see Indians by-and-large living in one area.

Minneapolis is somewhat unique. There are a thousand Indians living near Franklin Avenue, so you literally have a physical Native community.

I began to understand and realize that we’ve got to claim parts of the cities. We have to build the physical infrastructure along with organizing and establish visible communities if we’re going to have power in communities. For people living in defined geographical areas, there is enough people and enough votes to have representation on city councils, county boards and all that. That’s called community development. 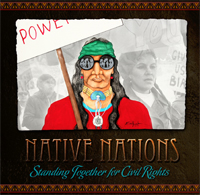 Challenging the status quo in Hollywood

Increasingly, I’m interested in producing. There is still very little Native produced films or television coming out. Most of what you see in Indian film or television is public television, which is good but it doesn’t have the mass audience. I understand how the media works. I’ve built relationships with the media. I should be helping to break down those barriers on the production side.

Now, I have money from one of the networks to work on my next movie. It’s a film about my great uncle Charles Eastman. The writer who inspired me from the very beginning. When my grandmother gave me his books to read those were the books that first inspired me. Now I am making a film about him.

The future of organizing–the internet

The future networks aren’t going to be about land, they’ll be about the internet. I tend to believe the media, now the internet, has such power to influence and advise people how to deal with issues. As an organizer, we have to be able to more effectively work with the media and understand the media. What I see as organizing is increasingly being also connected to the media and using particularly the internet to get information out; using the technology of the media to inform, to advise and to train. It’s going to be done by young people working from their homes, their schools and their local organizations, all through their computer networks.

It’s really a small universe we live in. If you believe there is no separation, then more and more we have to bring people together. I see the media in its various forms and formats as the way to do that.

Below: audio of Syd Beane talking about spirituality