Char and Judy Madigan, aka “The Twins,” don’t play baseball, live in pricey digs, or sign $184 million contracts.  The Madigan twins are twin sisters by birth and Sisters of St. Joseph by vocation. For those who are homeless, immigrants, in need of food, health care, justice or a port in life’s storms, Judy and Char Madigan are the Twins.

The Madigan Twins agreed to meet for a chat  about our mutual alma mater, St. Joseph’s Academy (SJA),  longtime flagship of Twin Cities-area Catholic girls’ schools.  Opened by the Sisters of St. Joseph (CSJs)  in 1851, the Academy (as it is still known) closed its gates in 1971.  SJA graduates and the spirit of SJA live on!

The Madigan Twins, SJA ’55, took time to reflect on their high school experience and their lives as Sisters of St. Joseph serving the critical needs of the variously disenfranchised.    On May 1, they will join over 200 SJA graduates to honor their heritage at the All Academy Appreciation Day.  It’s a rare occasion when alumnae dating back to 1926 pause to express their appreciation of SJA teachers and staff – those many women and a very few men who bent thousands of teenage twigs into resilient trees, deeply rooted in principles of social justice, systemic change and a Can Do spirit best reflected in the Latin word possumus, maxim of the CSJs. 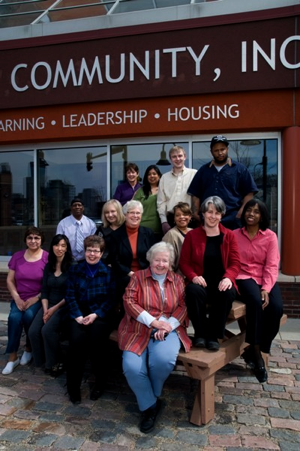 I met with the Madigan Twins at Char’s workplace, Hope Community in South Minneapolis.  Everyone at Hope Community – not to mention everyone on the City Council, city planning, the Mayor’s office, the halls of the Government Center and beyond – knows Char as one of  the indefatigable founders and current fundraiser for Hope Community’s 175 affordable housing units, which are just a few blocks from Judy’s post as a teacher at Learning in Style, a dynamic resource for immigrant learners struggling to master the English language, to read, and to become productive workers and responsible citizens.  In fall 2009, LIS moved into a lovingly restored building near Franklin and Nicollet.

It’s a ping pong conversation – Char speaks of philosophical principles as Judy illustrates with stories – and then they switch roles.  Why did The Twins go to SJA?  Because their sister Mary, their mother (nee Adele Kibbe ) and their grandmother (nee Breneman) went there.  More important, they recall, is the fact that the Sisters kept the tuition at an affordable $100/year/rate.

What do they remember about SJA?  There was “excellence in the air,” Char recalls – attention to a rigorous curriculum that touched “the will, the mind, and the spirit,” with the quest for truth, beauty and goodness as its guiding force.  The Twins reminisce about the particulars:  There were the classics, emphasis on correct English usage, speech and writing, Latin, French, an array of history courses, art, music and more music.   Chemistry, physics, algebra, biology, geometry and calculus were de rigueur.  And every girl had a chance to learn the practical skills of typing and shorthand, Christian Family Living (i.e. home ec) and none had the option to escape PE or the flattering fashionable gym suit. 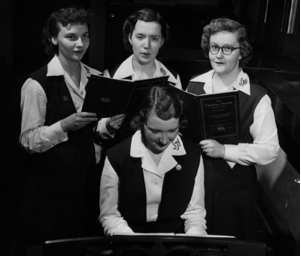 SJA choristers in the mid-1950s

Class projects were the norm – the annual full-blown production of Handel’s Messiah and serious dramatic productions, as well as crack basketball and volleyball teams.   Teachers and families were regular attendees for cultural and athletic events alike.   Buoyed by the unconditional support of their teachers, the Jo-eds (yes, that’s what we were called in the day) thrived on the prevailing air of excellence.  “The soft bigotry of low expectations” was never an issue at The Academy.   Judy and Char reflected, too, on the implicit lessons that have shaped their lives.  Quoting their father’s reminder that feeding those who are hungry is “not charity but justice,” Char and Judy recall the Sisters’ delivering food to neighbor families and tell with fondness about Sister Irmina tutoring their eldest sister when Mary was sidelined by polio.

In the 1950s, most SJA grads went on to be moms and grandmas, nurses, teachers, secretaries, pillars of their parishes, neighborhoods, professional associations or advocacy groups.  Part of what continues to propel them is the SJA experience that did not so much “teach” as create an environment that modeled possibilities, supported in word and deed, and built a community of women who, after forty or more years connect through every possible medium – from the annual Memorial Mass for deceased graduates to a regular Chapter Chats newsletter as well as lively e-lists initiated by individual alums to serve their class cohort.  On May Day  they join in a 21st century “shout out” to their teachers and staff, many of whom will be at the table, all of whom live on in the memories of the Madigan Twins and the thousands of other women who once graced the hallowed halls of The Academy.

Char starts to glance at her watch — time to wrap it up for the day.  The penultimate query:  What would you say to a favorite teacher?    Growing pensive, Char speaks of her high school experiences with literature and history – the power of stories, fiction, drama or real life, that capture the triumph of the human spirit.  Shakespeare, both Char and Judy affirm, taught them to see the good “even in villains”. Given the chance, people can thrive,” Judy concludes, as Char adds that their SJA teachers instilled confidence that we were capable of being “great as we can be” and that “they will help.”  These women were decidedly feminists.

The wrap up challenge is for Char and Judy to complete the bumper sticker “I’d rather be….”  Judy’s response is both instantaneous and unequivocal:  “I’d do exactly what I’m doing now!”  Possumus!