This week Connect Minnesota published their latest report from a summer of surveying Minnesotans about broadband adoption. It also estimates availability and speed. I think it’s a precursor to the Task Force report due at the end of the month, which will probably highlight much of the same information. So if you want a sneak preview of what’s to come – this is it.

One factor stressed in the report is that these numbers would be very different if you were looking at availability by location. About 60 percent of Minnesota’s population lives in the Twin Cities and the Twin Cities generally have pretty good access. Access across rural parts of the state is not as good and very uneven. 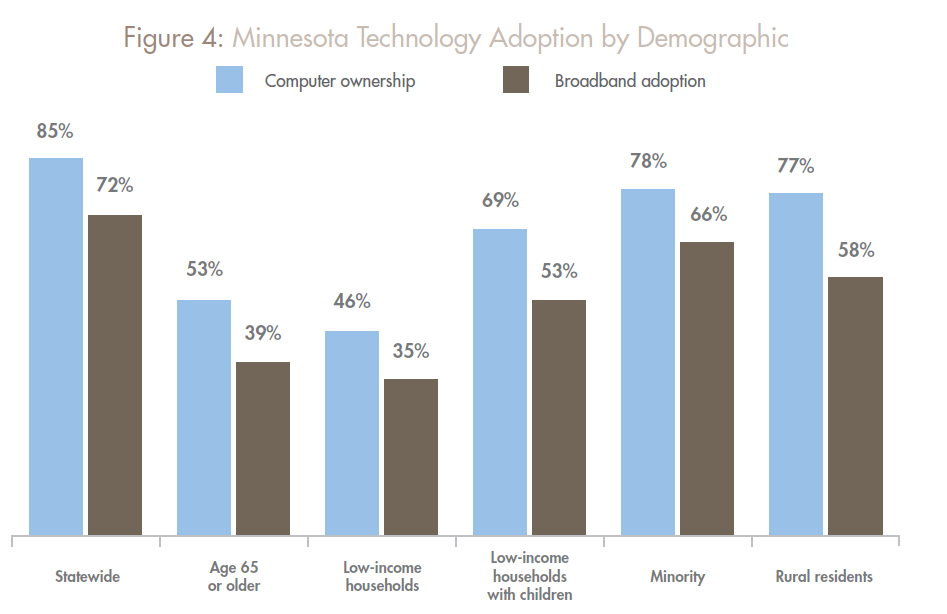 The report includes a list of strategies to address the broadband availability gap:

They also have suggestions to address the broadband adoption gap

*Several specific grant/funding opportunities were mentioned such as getting funds through E-rate (education), Institute of Museum and Library Services and State Broadband Data and Development grant program (SBDD) funded by the National Telecommunications and Information Administration (NTIA) 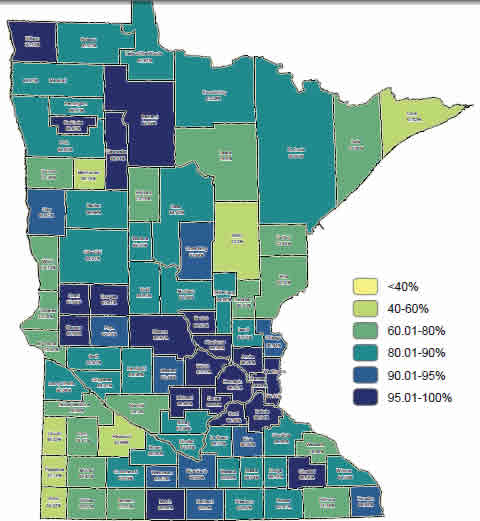 My favorite part of the report

The report includes some statistics at the county level too I know in the past these county maps and data have spurred some action at the local level. I think that’s very valuable because at the end of the day I think it takes a local champion to get traction for local broadband. The case is made that broadband is most sparse and most expensive to deploy where the household density is low. So it’s difficult for national providers to create a business plan that makes it attractive to come into an area. Local folks have the “advantage” of a broader view; they can’t just focus on cost to deploy – they need to recognize the cost of not deploying too. That cost comes in added expense to reach healthcare to seniors, reduced access to education for local kids, loss of business certainly in persuading business to come into the area but even retention.

County folks may also be interested in section on FCC Availability Gap (starting on page 47). The FCC assumes that 95 percent of the country will have its broadband needs met by market solutions; they figure it will cost $23.5 billion to help the remaining five percent. If you are in that five percent, you want to make sure the numbers are right to improve your chances at receiving your support. The FCC has used a statistical model to estimate broadband coverage, but recognize that their model is imperfect. The chart on page 49 highlights discrepancies between the FCC model and Connect Minnesota research.

The report still provides information on access and adoption to slow connection (768 Kbps to 3 Mbps). This came up at the last Task Force meeting. I think once you list those speeds in a broadband report it elevates that speeds to broadband status and gives folks an opportunity to misinterpret them. It would be nice to eliminate them. Right now these speeds of 768 Kbps to 3 Mbps seem to represent the underserved. (This goes beyond the scope of this report but) I’d love to see the 4-100 Mbps represent the underserved. Really if the rest of the country is striving for 100 Mbps – how can we thin 4 Mbps for some is adequately served?

Also it would be nice if the speeds matched up with goals. We have speeds up to 3 Mbps when the National Broadband Plan goal for second tier service is 4 Mbps. We also have speeds measured at 10 and 25 Mbps when the state goal is 10-20 Mbps.