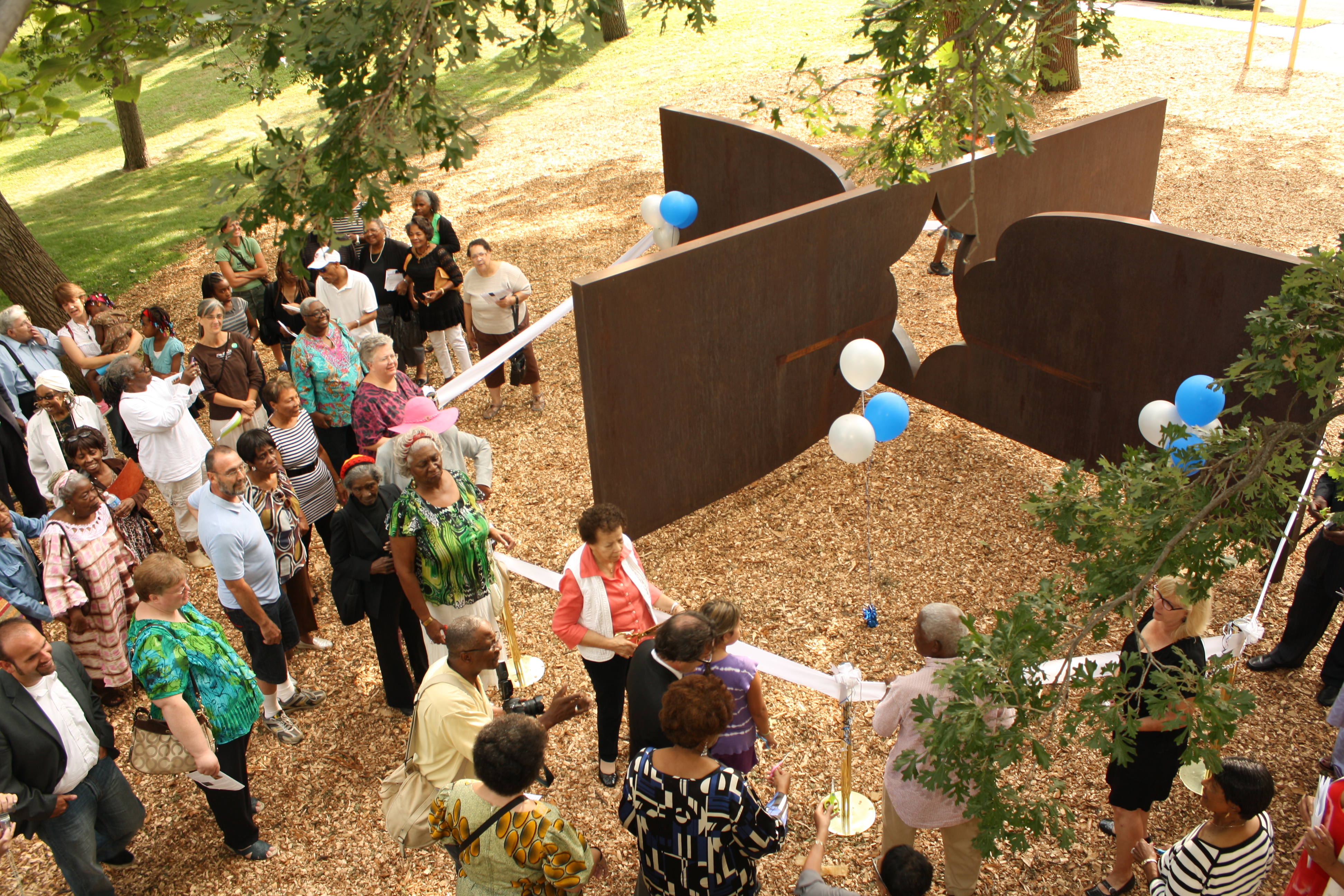 On August 28, 1963, the Reverend Dr. Martin Luther King, Jr. delivered his “I Have a Dream” speech during the March on Washington. On Sunday August 28, 2011, exactly 48 years later, community members gathered in Rev. Dr. Martin Luther King, Jr. Park at 4055 Nicollet Avenue South to celebrate the MLK Memorial in Washington, D.C., and for the rededication of the King Park and a sculpture created in King’s honor.

The three-hour event began at 2 pm and included the re-dedication of “Freedom Form #2,” a sculpture donated by New York artist Daniel LaRue Johnson that was originally dedicated to honor Dr. King in the park in 1970.

According to Charles E. Mays, a retired social worker who also worked for the national NAACP office as the youth regional director at the time of the first dedication, the artwork received its name because of the two interlocking wings representing flight and freedom, as expressed by the artist.

Mays told MSR that on August 25 the artwork was returned to its original location on the 40th and Nicollet Avenue side of the park. This is, according to Mays, a better spot for all to see the piece. He remembers never hearing a good reason for moving the artwork in the first place.

After a controversy that surrounded an attempt by some people to add a dog park to King Park, community members and leaders had concerns about the lack of vision for King Park and the Freedom Form #2 sculpture dedicated in his honor, which was moved from its original location. To address this issue, the park board decided to appoint former park superintendent and commissioner Mary Merrill Anderson to facilitate an advisory task force to make recommendations to the park board.

MSR spoke with Mary Merrill Anderson about the work of the Rev. Dr. Martin Luther King, Jr. Advisory Task force and their proposal to the Minneapolis Park Board. Anderson pulled together the committee, which held meetings for over a year. According to Anderson, in the last three months, they planned this program to coincide with the national recognition and dedication of the Martin Luther King, Jr. statute on the National Mall in Washington, D.C.

“It’s unfortunate that [the D.C. memorial] program was cancelled because of the hurricane, but we said that we would still carry on the spirit here locally,” said Anderson. “We wanted to rededicate the sculpture, which was languishing from neglect for over 40 years in this park. We brought it back to its place of prominence, and we are going to restore it. Then we are going to make this park over again, in the image of the Reverend Dr. Martin Luther King, Jr.”

In May 2011, the park board unanimously approved Phase 1 of the task force recommendations that allotted funds for the restoration and relocation of the Freedom Form #2 sculpture to its original site and the creation of the Rev. Dr. Martin Luther King Jr. Legacy Council to raise $1.6 million for Phase 2 recommendations. The Phase 2 plans include an outdoor amphitheater, improved signage, peace gardens and historical interpretive markers.

The park was originally Nicollet Field, but in 1968 changed to Martin Luther King, Jr. Park to honor the civil rights leader, following his assassination earlier that year. Based on recommendations by the advisory task force, the name of the park is now Rev. Dr. Martin Luther King Jr. Park, ensuring the legacy of Dr. King. The only difference is that now the titles of “Reverend” and “Doctor” are included. It was just as important to the original advocates as it is to the current King committee to have Dr. King’s full title on everything.

In addition, the King Committee plans to create a plaque in front of the sculpture to give a description of the work and information about Daniel LaRue Johnson, the creator.

Susan Roberts of Obsidian Arts in Minneapolis addressed the crowd and offered a historical background about Minnesota’s place in civil rights history and the importance of the artwork: “In 1968, Minneapolis, Minnesota really appeared to be a beacon of hope for the nation. Minneapolis was one of the first places to have a public space dedicated to the memory of Dr. King. In addition to that, in 1948, Hubert Humphrey was the first to introduced civil rights legislation.

Daniel LaRue Johnson is a nationally noted sculptor. At the time he dedicated this sculpture in 1970, it was the largest Corten steel sculpture in the world.”
Roberts concluded by stating that this particular artwork is important and is probably one the few public art pieces in our city that honors an African American and was created by an African American.

More information on Rev. Dr. Martin Luther King, Jr. Park is available on the Minneapolis Park and Recreation Board website at www.minneapolisparks.org.