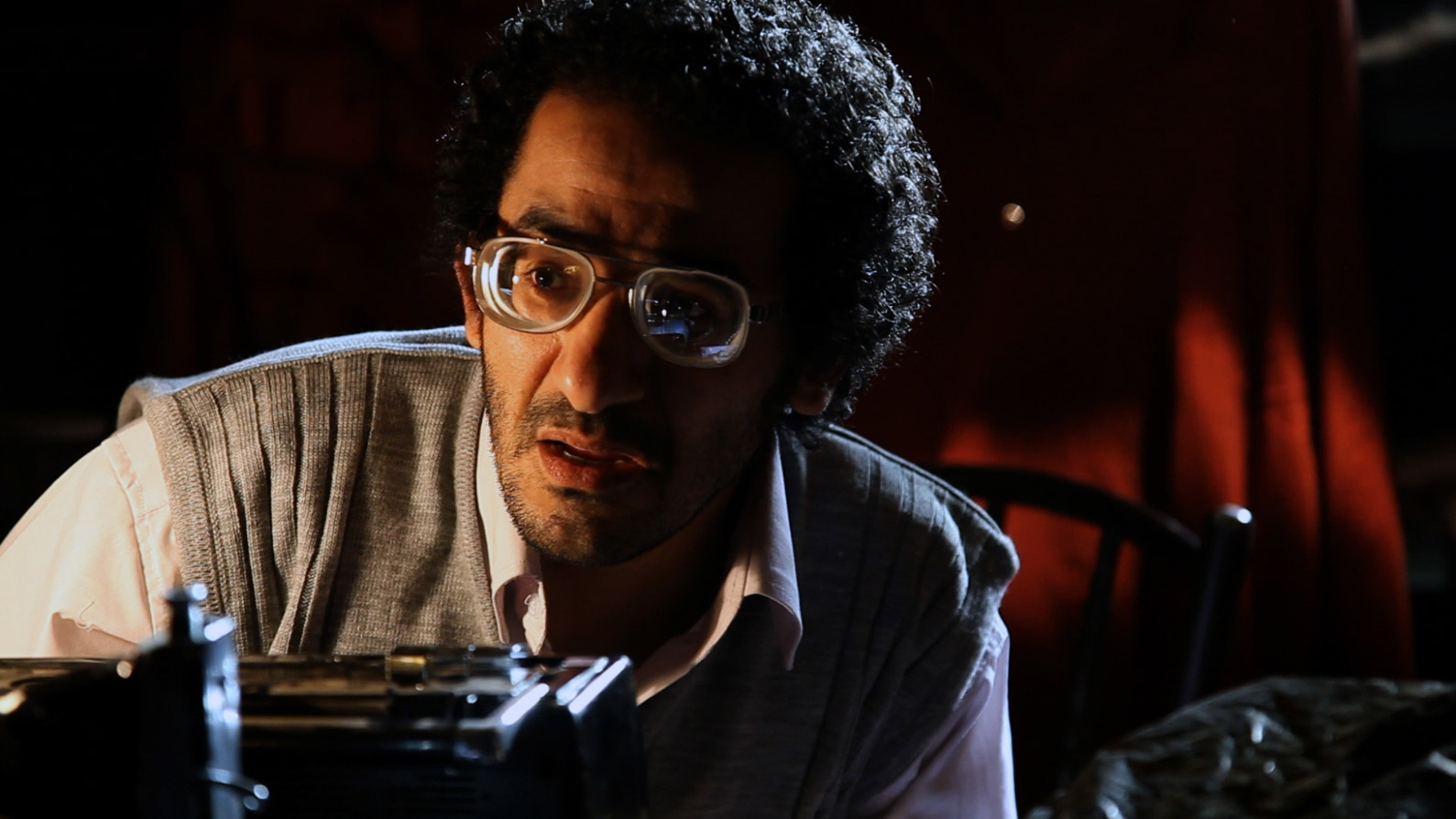 Mizna’s 7th Twin Cities Arab Film Festival, which runs from November 10-13 at the Heights Theatre, proves to be especially poignant in the wake of the Arab Spring—the wave of revolutionary demonstrations and protests in the Middle East that began a year ago. With a wealth of documentaries, shorts and features, art converges with revolution in original ways.

The festival’s opener, 18 Days, is comprised of 10 different short films about the 2011 Egyptian revolution in Tahrir Square. Retention focuses on Egyptian characters at a mental institution from before the events of the Jan. 25 revolution. God’s Creation begins with a young Muslim woman, daring to dye her hair red, then drawn into the protests. 19-19 is the number assigned to a detained protestor, who undergoes torture by an Orwellian interrogator. This terrifying film should be required viewing for those who support the “enhanced interrogation” policy of the U.S. Revolutionary Cookies has a timid tailor who’s just come out of a diabetic coma retreat to his shop, thinking the country is under foreign invasion. In Ashray Seberto a barbershop owner discovers his capacity for quiet courage. When The Flood Rises humorously exposes profiteering from protest. These are 10 masterpieces of the short form genre, with indelible characters, searing situations and many artfully incorporate actual news footage.

A unique road trip drives Taqwacore: The Birth of Punk Islam—Omar Majeed’s documentary about young Muslim musicians in America and Canada creating a punk music subculture. Bringing their religion into the 21st century while expressing the political and social anger that’s always defined punk, their tour takes them on a wild ride from Brooklyn, San Antonio, Texas, Detroit, to the annual Islamic Society of North America (ISNA) convention in Chicago where they are kicked off the Muslim Student Association’s open mic stage for “haraam”—anything that is prohibited by the word of Allah. These rebels with a cause (to end Islam phobia and U.S. wars in the Middle East while making raw music that inspires Muslim youth to dance) are led by Michael Muhammad Knight, an American Catholic convert to Islam whose novel is the film’s namesake. His sojourn at an Islamic school he attended shortly after conversion is capped by the musicians’ punk concert in Lahore, Pakistan. Taqwacore takes on serious cultural questions with a rare complexity on top of the entertainment factor.

Zeina Daccache achieves a beautiful interweaving of art and politics in 12 Angry Lebanese, documenting her theater program in a prison. The men’s self-examination of why they committed violent crimes could echo any American prisoner’s. ”It is a sad thing to mean nothing,” one says. Since the U.S. has the world’s largest prison population (while cutting most rehabilitation programs in a growing for-profit prison system), this film’s redemption through artistic expression provides an inspiring alternative to America’s obsession with punishment.

Fawaz Al-Matrouk’s meditative short To Rest In Peace documents his return home to Kuwait during Saddam Hussein’s invasion in 1990. Part of a full feature, Al-Matrouk’s autobiographical incident has a quiet, yet profound, universal humanity. Minneapolis-based Iraqi-American filmmaker Tarik Rassouli debuts with Iraq, Finally, a video diary of returning to his home country at 19 years old. Direct with the blunt observations of an American teenager, it’s fresh and includes a warm and humorous reunion with his father, Sami, who was a long-time local restaurant owner who returned to rebuild Iraq and create Muslim-Christian peace teams.

While documentaries get more attention in the U.S., festival curator Rami Azzazi states that narrative films are central to Middle Eastern cinema, noting that, “Love stories and comedy will have content about current issues.” Inspiring thought doesn’t conflict with entertainment in Arab films.

Georges Hachem’s Stray Bullet explores one day in the life of a Lebanese actress Noha—played by actress/filmmaker Nadine Labaki—who changes her mind one week before her wedding. Perfectly re-creating late 1970s Beirut during the civil war, Hachem returns to a favorite theme he delved into in two previous shorts: A remarkable woman rebelling against her prescribed social role. Stray Bullet won the coveted Muhr Award at the Dubai International Film Festival. Bahij Hojaij takes a more head-on perspective of Lebanon’s civil war in his taut drama Here Comes The Rain about a man kidnapped during the conflict and who re-emerges after 20 years. American audiences will recognize difficult family dynamics preceding, and exacerbated by, the storms of history.

Scheherazade, Tell Me A Story has another striking female protagonist: Hebba, an Egyptian talk show host (stunningly played by Mona Zakki). Her husband asks her to tone down her investigative journalism until he gets a promotion. Director Yousry Nasrallah’s heroine becomes the Oprah of Cairo, focusing on “women’s stories,” only to find out that the American feminist adage— “The personal is political”—packs as much punch now in Egypt as it did 40 years ago in America. Another memorable woman is Lebanese-Canadian filmmaker, Mahmoud Kaboor’s Teta, Alf Marra (Grandma, A Thousand Times). Magically re-uniting his deceased violinist grandfather with his 83-year-old grandmother, (with his grandfather’s violin improvisations as a soundtrack), Kaboor also illuminates a Beirut that is fading away. It’s a lovely leap into memoir after Kaboor’s bold, post-September 11th documentary Being Osama.

Perhaps the bravest thing that the Arab Film Festival does is bring Palestinian filmmakers’s work to American audiences who have been bombarded with a one-sided Israeli viewpoint. Triumph 67 is an introspective drama about a Palestinian-American man coming to terms with the death of his brother and a long ago summer romance with an American student. The debut film by Jewish filmmaker, Dan Tanz (South High/Macalester alum) is a Jewish-Arab co-production that uses non-actors to fine effect, winning Honorable Mention at the recent Minneapolis-St. Paul International Film Festival.

Two documentaries shatter the censorship of Israel’s war crimes against Palestinians; Gaza Strophe reveals the horrific impact of Israel’s “Operation Cast Lead” assault on Gaza in December 2008 and January 2009, which included 730 F16 bombing runs in just one day. Co-directors Samir Abdallah and Kheridine Mabrouk expose stark rubble that remains today (Israel still blocks construction materials entering the Occupied Territories). The heartrending human cost is detailed by Palestinian civilians who are usually cut off from American media. As one middle-aged father says, “This is irrefutable evidence.” A creative act of peacemaking is paired with Gaza Strophe in Tania Khalaf’s short Gaza Shield. The Texas-based Lebanese filmmaker and professor follows Palestinian computer game designers as they create a peaceful counter to an Israeli game, Gaza Raid that earns points by killing Palestinians.

Dark and dry wit is a Palestinian coping mechanism, exemplified in Elia Suliman’s The Time That Remains. The final film of a trilogy that included Divine Intervention, Suleiman looks at three generations of Palestinians living in Israel since 1948. Electronic Intifada co-founder Ali Abunimah praised the film’s contrast to the absurd and poignant, comparing the film’s protagonist to silent film era comedian Buster Keaton.

Finally, no cinemaphile should miss Algeria, Images of a Fight—Jerome Laffont’s portrait of French filmmaker Rene Vautier, much beloved for his documentation of Algeria’s war for independence from French colonial rule. This gentle lion tried to show his countrymen the brutal reality of the war their government only glorified, much like American peace activists attempted regarding the wars in Vietnam, Afghanistan, and Iraq. After being in WWII’s French Resistance, Vautier says he devoted his life to end war: “My weapon was my camera.” The same could be said of these amazing film artists Mizna brings us.