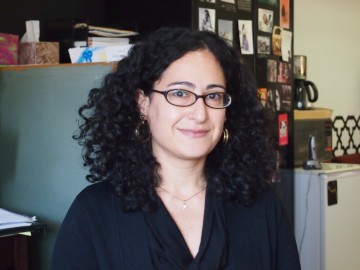 Since October, when I first heard about Mizna, an organization that, among other cultural and artistic endeavors, publishes the country’s only Arab-American literature journal, I have not been able to get it out of my mind. Coming from Philadelphia, I can definitely acknowledge a certain stereotypical view of the Midwest as being an excessively homogenous place greatly lacking in diversity. Having lived here now for three years, I can return to Philly proudly with the news that the coasts don’t really know what they’re talking about, at least when it comes to the Twin Cities—the fertile, amazing land of the nonprofit.

A few months ago, while interviewing for my new job at The Loft Literary Center, when I was asked what I consider to be the Twin Cities’ best-kept secret in the arts community Mizna came to mind immediately. While it’s bothersome that not everyone in Minneapolis knows about every arts organization (I mean, I know that’s unrealistic, but still), it really, really bothers me that so few people I know have heard of Mizna, especially in these trying global times. Not to mention, it’s not like Mizna is some rinky-dink operation—the journal is a finely published, beautifully edited, and engrossing collection of work that is read worldwide.

This Saturday, Mizna will be launching its 24th issue since its inception in 1999. Created in Northeast Minneapolis, and published biannually, each issue of Mizna features an array of diverse voices (not all of them of Arab decent), all dealing in one way or another with the Arab-American community, and sometimes themed. The theme of the newest issue is “Literature in Revolution.” Past themes have included family, Lebanon, comedy, and satire.

Co-sponsored by The Loft Literary Center, the launch event will feature readings by local authors, a tribute to artist Ahmed Basiony—who lost his life last January at Tahrir Square while supporting the Egyptian Uprising—and a Skype appearance by Maimouna Alammar, an author in Syria.

Back in December, Mizna director Lana Barkawi was kind enough to present me with several issues of Mizna. While not every piece is wholly relatable to me, each story, poem, and essay contained therein brings me closer to understanding cultures that have been misrepresented and misunderstood in America for decades. The work that Mizna is doing is important. I hate telling people what to do, but every single person in Minnesota would benefit by checking out Mizna, or at the very least, by showing up to this event on Saturday and seeing what it’s all about.