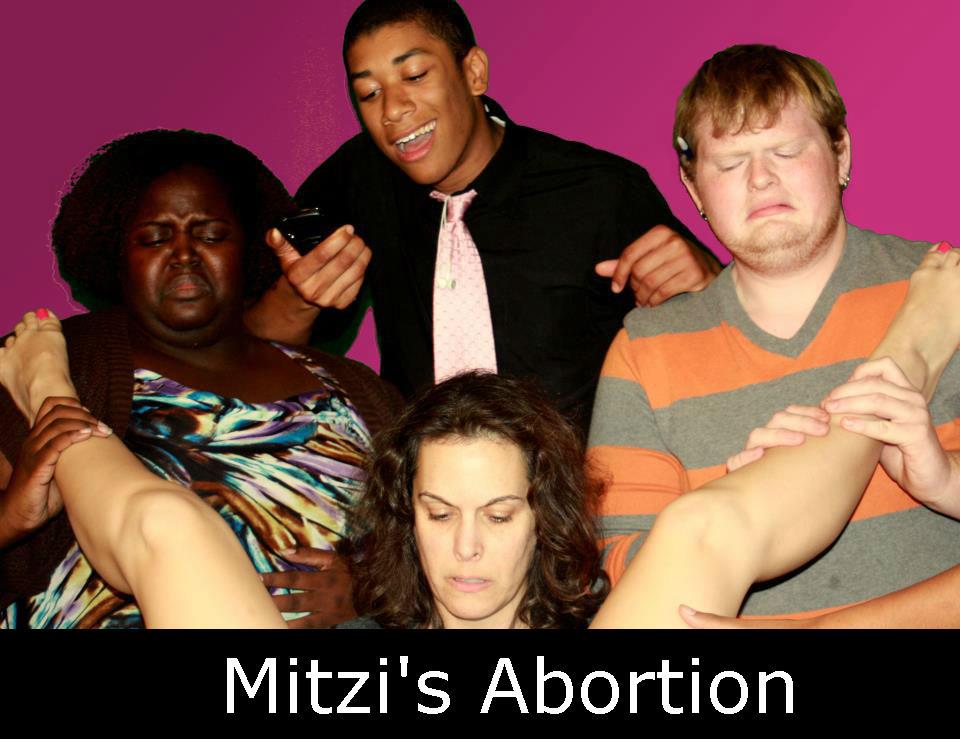 Last Friday I thrilled my husband with tickets to Mitzi’s Abortion: A Saint’s Guide to Late-Term Politics and Medicine in America. We’re both Catholic, one more so than the other, and have differing views on abortion. And we haven’t had a good argument for a while, so it seemed like a good fit. Turns out we were both surprised by the production—mostly because the show doesn’t live up to the controversy of the name or the marketing. But that wasn’t such a bad thing.

We assumed the play would be a story about choice, but it isn’t really. At least, I suspect, not for anyone who would go to see a play called Mitzi’s Abortion. Not to be a spoiler but the main action involves a sad story of Mitzi who gets pregnant, gets married and is told late into the pregnancy that the child has anencephaly, a severe birth defect. The choice about whether or not to terminate the pregnancy is made by the insurance company. Despite the increased cost (financial and emotional) of requiring Mitzi to go to full term, the insurance company decides they will not fund the $10,000 doctor-recommended procedure.

The strongest part of the show is the story of Mitzi (played by Rebecca Hanson) and her journey through the experience starting with the ambivalent feelings towards the pregnancy, difficulty dealing with the fallout from the birth defect and wrestling with the moral dilemmas both with her situation and her reactions to the situation. Hanson does a good job of subtly showing the range of emotions and growth of character throughout the show.

The moral compass is presented by St. Thomas Aquinas (played by Immanuel Elliot) and Reckless Mary (played by Holly Windle), a Scottish midwife burned at the stake in 1662. For a play that is set in hardcore realism, the whimsy of the dearly departed guests fits in surprisingly well. It gives an opportunity to explore the history of the church’s view on reproductive issues as well as a chance for Mitzi to explore her own thoughts in a stage direction more befitting the play than soliloquy. Both Elliot and Windle do a nice job balancing wisdom and humor in their roles.

There were some theatrical strategies that worked less well. An “expert” (played by Matthew Hall) periodically put a stop to the story on stage to introduce scientific facts to the audience. Hall’s portrayal was not the problem; from my perspective it just felt too instructive. Another less effective strategy, the play seems to make up for dodging the big controversy by introducing too many minor controversies. Any one of these issues could have taken the play into a new direction and that would have been fine, but introducing so many was fruitless overload. Again it felt too instructive; as if it wouldn’t occur to the audience members that pre-natal testing wouldn’t simply screen for severe birth defects but could also be used to scan and flag other traits in the unborn.

At the best of times, the play is a heart-wrenching story of what happens when bad things happen to good people and the role religion and societal morality have in making it worse. That’s quite a good story. At the worst of times, the play feels like a preachy afterschool special. That being said I wish I could make this required viewing for some friends.