Each day, thousands of people zoom across the bridges over the Mississippi River. The dark blue water flows quietly past downtown high rises and sandstone bluffs on its way to the Gulf of Mexico.

To pass off this scene as nothing more than a nice view is to minimize one of Minnesota’s most important natural resources and its role in everyday life. The Mississippi provides water used by residents of the Twin Cities. Treatment plants make it safe to drink.

Although only about one percent of water delivered to households is used as drinking water, the treatment of public water is extremely important to public health. If public water is not treated properly, bacteria and other communicable diseases from the water would spread.

For Minneapolis, St. Paul, and the majority of first-ring suburbs, water is treated at two different facilities. One is the Minneapolis Water Works facility in Fridley, and the other is the St. Paul Regional Water Services facility in Roseville.

Minneapolis Water Works serves Minneapolis, along with Golden Valley, Bloomington and other bordering cities. It also provides water to the Minneapolis-St. Paul International airport and the Mall of America.

Inside the treatment facilities, most rooms have the odd, dingy scent of lake water, and the rooms are dim. Since insects breed in water, each facility has one floor littered with dead insects. In the Minneapolis facility, there are constant zapping sounds as various devices burn unsuspecting pests. 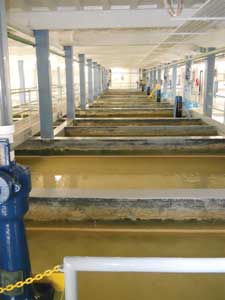 Right: Large tanks in the flocculation section of  the treatment facility are used to remove sediment and other large matter from the water.

When river water is run through these treatment facilities, it undergoes various processes to filter out harmful chemicals and contaminants. After the water is softened, both facilities allow the water to sit in large circular tanks where dirtier water containing bacteria and other undesirable contents sinks to the bottom.

Clean water flows over the edges into small rivers that run through the floor. These streams are directed to other parts of the facility for further filtration and chemical treatment. At the St. Paul facility, a small amount of ammonia is added to the chlorine to create a lasting disinfectant.

“We add ammonia to the water, and the chlorine and the ammonia combine [to make] chloramine,” said Jim Bode, water quality supervisor for St. Paul Regional Water Services. “We’ve got a system that’s so big that it can take up to three weeks for the water to get all the way to the far end of Mendota Heights, so we need a disinfectant that can hang in there for weeks at a time.”

People seem to care about the source of their water.

“My interest is sparked by a desire to be healthy, and water plays a huge role in that,” said Bill Shy, who recently led teens from the Southwest Community Education program to tour the Minneapolis treatment facility.

“The water coming out of your tap is the healthiest thing in your house,” said George Kraynick, lab supervisor at the Fridley facility. “If people are getting sick, you’ll hear about it. As long as there’s chlorine in the water, [it] is pretty much safe to drink.”

Most of the chemicals added to public are present for both safety reasons and to meet requirements set by the federal Environmental Protection Agency, which regulates the amount of contaminants allowed and the amount of cleaning chemicals required in tap water.

Minnesota is consistently ranked highly in the nation for its compliance with EPA regulations, said Stew Thornley, health educator for the Minnesota Department of Health.

One common debate is whether bottled water is healthier than tap water. One important difference is how they are tested. The EPA regulates tap water, and the Food and Drug Association regulates bottled water.

In a 2009 report, the General Accounting Office – a nonpartisan agency that works for Congress and investigates how the federal government spends taxpayer dollars — revealed that some of the the federal safety regulations for bottled water are weaker than those for tap water.

For example, the FDA does not have authority to require bottlers to use certified laboratories for water quality tests or to report test results, even if violations of the standards are found. The report noted that the states’ requirements to safeguard bottled water often exceed those of FDA, but are still often less comprehensive than state requirements for tap water.

Environmentalists also warn about the energy used to produce bottled water and the waste involved in throwing away millions of plastic bottles each year.

“Tap water from a public water system is going to be tested more closely than bottled water,” said Thornley. “If people want to spend $1.50 on water, fine. We just hope that people are making informed decisions.”