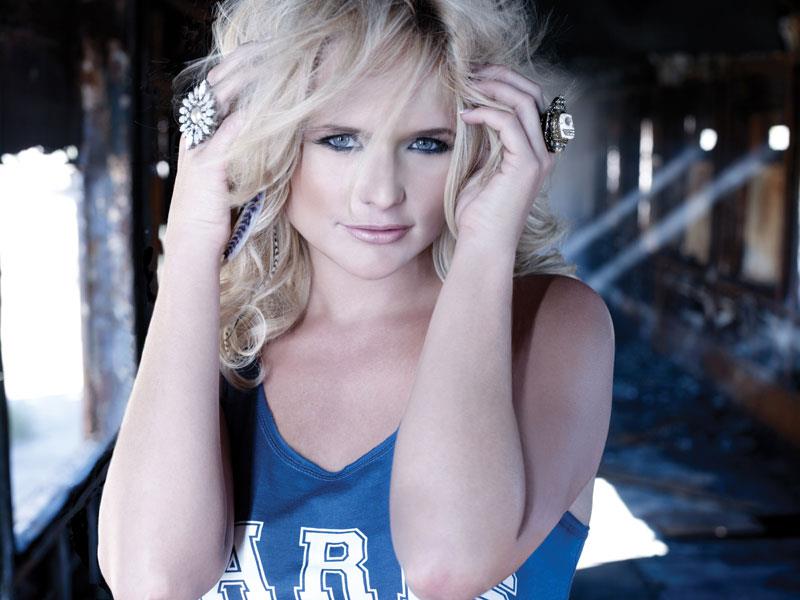 Miranda Lambert presents herself as a country “bad girl,” a chick with a pistol tucked away in her jeans, a flask of whiskey in the glove box of her car, and a broken heart seeking revenge against those good-for-nothing cowboys who’ve done her wrong. Where Taylor Swift simpers sweetly and Carrie Underwood yowls like a 2-D pop star in sparkly minidresses, denim-clad Lambert speaks her mind, tells us all to go to hell and then pleads for us to come back. She’s a modern day Loretta Lynn, a country star in the old-school vein without the slick of pop polish. She may have shacked up and settled down with her own Conway Twitty—The Voice judge and fellow country star Blake Shelton—but those edges are always gonna be a little rough.

Texas native Lambert is teeny-tiny—only about 5’4″—but her stage presence is massive and so is the voice that comes with it. She had no problem filling the arena with that voice, which can easily slip between a coo and holler in the confines of a four-minute song. The petite blonde in the District 12 T-shirt (she shouted out to Hunger Games heroine Katniss Everdeen) tore up the Target Center stage on April 20 with a 90-minute emotional rollercoaster of a set for her “On Fire” tour. We were laughing, crying, whistling and stomping right along with her.

The majority of Lambert’s four studio albums center heavily on the “he done me wrong” theme, with the singer plotting the destruction of a man whose boots have stomped on her heart. But she’s no wallflower; she’ll set his car on fire, get him thrown in jail and laugh about it. We got a great deal of the “Crazy Ex-Girlfriend” Lambert with songs like “Kerosene,” “White Liar,” and “Mama’s Broken Heart.” You hurt Miranda, she’s gonna hurt you right back…after she cuts her bangs and screams about it for awhile.

But there’s a softer side to Lambert, and once you peel away the tough-girl exterior it’s the gentler layers that are most affecting. (No matter how many times I’ve heard “The House That Built Me,” I always shed a few tears.) Her latest single, “Over You,” was written with Shelton about the death of his brother several years ago; its simple lyrics “You went away/ how dare you/ I miss you” shoot straight to the heart. Lambert sings it with heartbreaking conviction and you mourn right along with her.

It’s unlikely Lambert will ever fall into the Hollywood trap as some of her country peers have done. (Wasn’t the heyday of pop-country when Shania and Faith Hill ruled the charts, anyway?) She appears to be unimpressed by the pop music industry as a whole; she met Lady Gaga at the Grammys and wasn’t all that impressed by the outrageous diva. But she must have been impressed with Gaga’s “You & I,” because she did a fantastic country-style cover that had her audience grinning like fools. Also covered were Rick Derringer’s “Rock and Roll Hoochie Koo,” Merle Haggard’s “Misery and Gin,” John Prine’s “That’s the Way the World Goes ‘Round.” Roger Miller’s “King of the Road,” which Lambert performed with her openers, country gents Jerrod Niemann and Chris Young, was possibly the unexpected highlight of the show. Their camaraderie was evident as they swigged their cocktails and sang.

Lambert’s refreshing, relatable and real. She’s a “proud size eight,” enjoying chicken-fried steak and beer too much to hire a celebrity trainer and crow about her weight loss to “Us Weekly.” Instead, Lambert serves venison at her wedding and slams down her signature drink, the ‘Randarita. (It’s Bacardi, raspberry lemonade Crystal Light and Sprite Zero, if you’re curious.)

Lambert is poised to inherit the Queen of Country throne from her predecessors like Loretta Lynn, Tanya Tucker, and Tammy Wynette, and her balls-to-the-wall attitude combined with a fierce talent and a big heart has built a career that will hopefully keep flourishing and growing as she ages. She’s a role model for country girls (and, yes, city girls) everywhere.