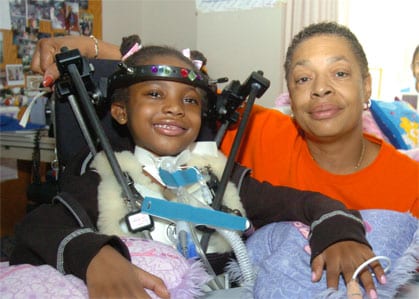 Recent scientific evidence has given support to the age-old understanding that a person’s attitude and will to live and the love and support they receive from others can play a significant role in the process of recovery from injury and disease. The real-life evidence for this exists at Regions Hospital in St. Paul, where 6-year-old Devyn Bolton, who was critically injured in a June 10 car accident, has been fighting for her life.

“She was in a coma for two weeks after the accident,” said Bolton’s mother, Bridgette Trice, in an interview with the Spokesman-Recorder. “It was slow at first; however, she is doing better than she was. She’s a fighter.”

The accident
The accident in which Bolton was injured occurred at the intersection of Snelling and Concordia Avenues in St. Paul. Widely reported in the local press, the crash took the life of Bolton’s uncle, 33-year-old Javis Trice Adams, and her young cousin Javis Adams Jr. Two other people, Trice Adams’s daughter Jasmine Adams and his father Quincy Adams, suffered serious injuries but have since been released from the hospital.

According to police reports, there were four cars involved in the crash that occurred when the driver of one car, which was exiting eastbound from I-94 onto Concordia in the direction of Snelling, slammed into the rear of the car occupied by Devyn and her family.

All together, nine people were hospitalized as a result of the crash. The driver of the vehicle that slammed into Trice Adams’ car, Koua Lee of St. Paul, said in a statement released by police that “His brakes did not work, making him unable to stop.”

“Were praying for him [Lee] and his family also, because I know it has to be rough on them knowing what happened to us,” said Trice.

Family still needs help
The battle young Devyn confronts will call on all the strength she and her family has in them, because her injuries are profound. However, even at this early stage in the recovery process, Devyn and her family have shown themselves to be capable fighters. They have fought and earned the solidarity and support of friends and hospital staff and their community.

“The nurses call her Miracle, because she wasn’t supposed to make it this far,” said Trice.

Besides recovering from the coma — Devyn is relearning how to talk and receiving daily physical therapy — she suffered serious injuries to her spinal column that have resulted in her paralysis from the neck down.

For Trice, who worked the graveyard shift so she could be available in the morning to help her children to school each day, the accident could not have come at a worse time. Since the beginning of this year, Trice and her three other children — Aarion (16), Breana (14), and Cameron (12) — had all been living with Trice’s mother in a two-bedroom apartment while she worked to transition into a house of their own. Then the accident happened.

“It’s safe to say even at this early point that Devyn is going to need a lot of specialized care,” said family attorney Fred Goetz. “She is going to need 24-hour care, assisted living arrangements, as well as handicap-accessible housing throughout her recovery process and beyond.”

Through the help of friends in the community, Trice has found a house that will be suitable for Devyn’s special needs. She is currently trying to get the resources together to purchase the house. “The house is handicap accessible and is big enough for me and the rest of the kids,” said Trice

Strong community support
“This whole time since June 10, the community has been very supportive, especially with their prayers,” said Devyn’s grandmother, Carolyn Trice.

“I want to say thank you to the Summit/University community, because my community supported us to the fullest,” said Bridgette Trice. “You know how you might want to give up on the neighborhood sometimes. This showed me how you can’t do that, because they came out and stood by us.”

One example of this support came from Devyn’s kindergarten classmates and teachers at Maxfield Elementary School in St. Paul, who dedicated the kindergarten graduation ceremony in honor of Devyn. “Her kindergarten teacher, Ms. Adrian Gill, deserves special consideration,” said mother Trice. “She comes to visit and stands at the side of the bed for two or three hours.”

Devyn is an excellent student who in her kindergarten year read at a mid-first grade level. She is also highly independent, explained Bridgett. “I had a high-risk pregnancy with Devyn, and I was a ‘Klingon mom,’” she explained, referring to the fact that she considers herself overly protective.

She was so protective that she would walk Devyn to the door of her classroom every day. “Then one morning Devyn said to me, ‘Mom, can I walk myself to class today? I think I need to be more independent.’”

Her desire for independence will serve her well in the near future. This, combined with the love and commitment of her mother, puts her in the best position to wage the long struggle ahead. “I have to do it, because she can’t do it by herself,” said Bridgette.