To celebrate 30 years of the Rondo Days Festival in St. Paul, organizers are bringing out the musical heavy hitters in the form of R&B super-group, Mint Condition.

“This will be the first time we’ve had a major act such as Mint Condition for the festival,” said Ronald Buford, Rondo Days entertainment chair and board member. “We’re real excited to have them and they’re real excited to perform as well.”

Rondo Days is a celebration of one of the oldest African-American communities in St. Paul. In the 1930s, Rondo Avenue was the heart of the city’s largest Black neighborhood. The construction of I-94 in the 1960s shattered the tight-knit community and displaced thousands of African-Americans. In 1982, Marvin “Roger” Anderson and Floyd Smaller began planning for the Rondo Days Festival and held the first Rondo Days Festival in 1983.

What may have started as a somewhat of a modest gathering has swelled to between 30,000 to 50,000 revelers, according to Buford.

“But we expect more than that this year because of the addition of Mint Condition,” said Buford. 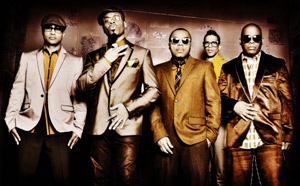 Though Mint is not slated to take the stage until 5 p.m., the Saturday festivities begin with Rondo’s annual parade at 10 a.m.

In addition to performances, according to Buford, the festival will offer more than 20 food vendors, various product vendors and service oriented vendors and booths.

Although the parade and festival are free, attendees can purchase what are being called sponsor seats that will be placed at the front of the stage. Sponsor seats are being sold for $50 and can be purchased online at www.rondoavenueinc.org. The $50 seats also come with t-shirts and souvenir booklets. The website also has a complete rundown of events, including a Friday, July 19 golf tournament, a Saturday evening party hosted by festival organizers and the 1983 graduating class of St. Paul’s Central High School and Sunday’s Founders Ball at Arnellia’s.

“We’ve got a lot more going on than just the Saturday events. For the 30 year celebration we wanted to offer something more,” said Buford.