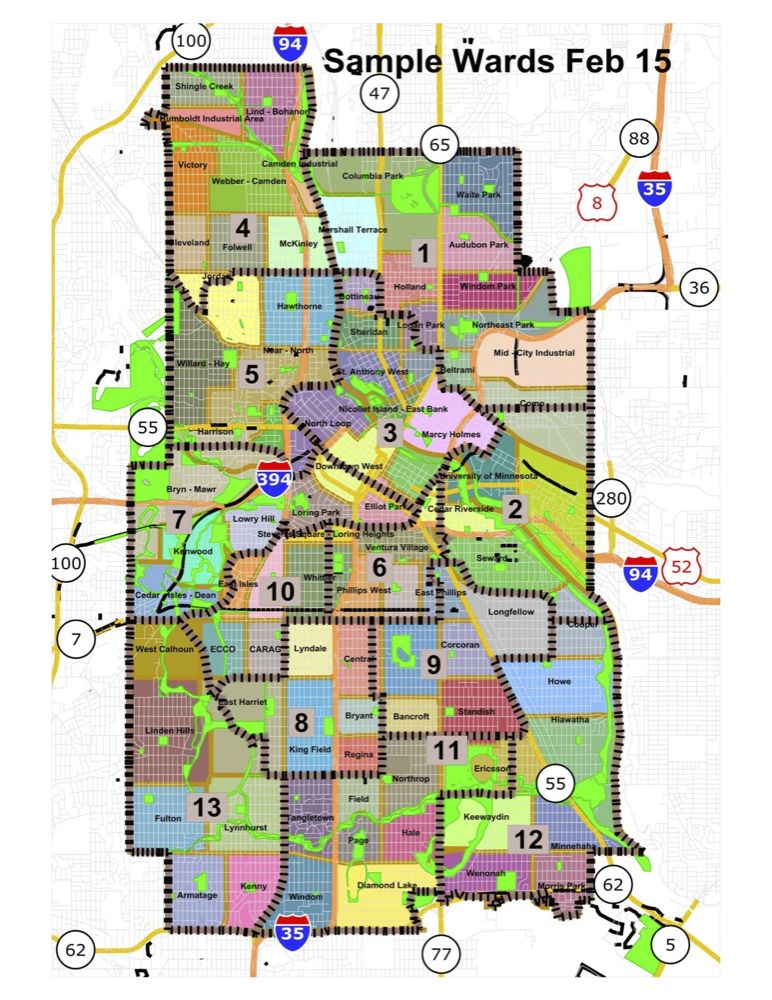 Some very quick deadlines are coming up for the local redistricting process, which will redraw boundaries for the city’s wards and parks and recreation districts, and debate centers on two major issues: minority representation and how to represent downtown. (Draft ward maps are published on the city website.)

Minority Representation: The Citizens Committee for Fair Redistricting, which represents immigrants from Somalia and East Africa, has offered a map to the Minnesota Charter Commission designed to provide greater representation for the minority community. In a letter to the city’s Charter Commission, the group claims the City Council’s current makeup underrepresents minority residents, at least some of which can be attributed to the way current ward boundaries are drawn. The group, which has hired the former state demographer, Hazel Reinhardt, is focusing on three inner-city wards.

A new Ward 2, which the group designates a “minority opportunity ward,” would include the Seward, Elliot Park, Cedar/Riverside and Phillips neighborhoods; a new Ward 6th would include downtown, Whittier and the western part of Phillips neighborhood and a new Ward 8th, would have a 28% Hispanic population. The group believes these changes would facilitate election of members of racial minorities to the City Council to better reflect the city’s 40% minority population.

Downtown representation: Another debate focuses on whether the downtown should be contained in one ward or split among several of them. In an online discussion, opponents of the one ward approach claim that since downtown is the city’s economic heart, it is everyone’s neighborhood and should not be at the mercy of one person. Others dismissed the concern, given the proven ability of business interests to capture the attention of politicians. Some claim that downtown residents would not get a fair amount of attention if the downtown made up only a portion of a council member’s constituency.

Barry Clegg, chair of the Minneapolis Charter Commission, wrote in an email posted on E-Democracy:

“There will be a lot of changes in ward lines after this redistricting. We have 3 wards that have too few in population (4,5,6) and 2 that have too many (2,7). Once those are shifted, almost all wards may look different than they do now. Park districts have to change too.”

Public hearings on February 29 and March 1 will provide the first formal opportunity for residents to express their opinions about newly-drawn tentative boundaries for the city’s wards. The February 29 hearing will be at the Webber Community Center, 4400 Dupont Avenue North, from 5-7 pm. The March 1 hearing will be at the Hosmer Library, 347 East 36th Street, Minneapolis from 5-7 pm.

The thirteen ward boundaries will be redrawn after the state legislative boundaries are determined, which will happen by court order, since the legislature and governor were unable to agree on a plan. That order is expected by February 21 The local process must be completed within 60 days after the state completes its process, but no later than April 3. Each ward must have approximately the same number of residents (plus or minus 5 percent). The Charter Commission is responsible for the final approval of ward boundaries, which is then sent to the City Council. The Council cannot change the boundaries; its role is limited to passing an ordinance or resolution defining new precinct boundaries and designating polling places.

The six Park and Recreation districts will also be redrawn by the Charter Commission and finally approved through a separate process by the Parks and Recreation Board. The Board may review and comment on the Commission’s boundaries but cannot change them.

Boundaries for the six Minneapolis school districts are set by the Minneapolis Board of Education, which may use the Park and Recreation boundaries or create its own.