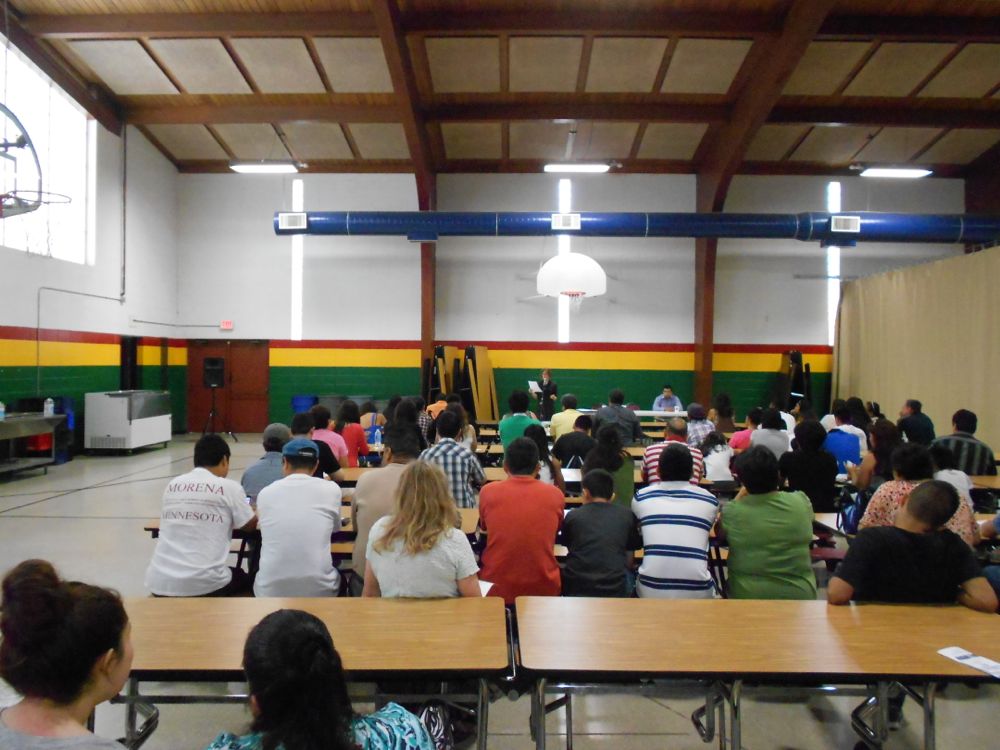 Immigrant youth at a July 22 forum in South Minneapolis listen intently to information about changes in immigration policy. (Photo by Erin Collins)

When 20-year-old “Lucia” (not her real name) was eight years old, her father brought her to Minnesota. While he came here as an undocumented construction worker, he dreamed of giving her a better education than she would have had in her native Baja California, Mexico. Lucia graduated from Hopkins High School with a GPA of 3.8. and received scholarships from the Mexican Consulate in Saint Paul and from Hennepin Technical College, where she is studying her second semester of nursing. Her dream now is to study medicine and give back to her community by opening a sliding-scale fee clinic. Her mother “Laura” (not her real name) describes her as a “role model for those immigrants who think they can’t continue their education.”

Yet Lucia’s plans were less certain until her family learned that she will qualify for the deferred action policy announced by President Obama on June 15. While there are many details yet to be ironed out, in a nutshell this policy means that certain undocumented individuals brought to the United States as children will not be deported. In addition, they will be eligible for work permission and a social security number. (For more information on the policy, click here.)

Lucia and others like her will not be given permanent residency or citizenship at this time, but they still are enjoying renewed optimism about their futures. In Lucia’s own words, “It makes us feel more like we don’t have to hide anymore and we can apply for better jobs and better pay. It makes it a lot easier to further our education and make plans for the future instead of just living for the moment.”

Lucia was one of about 75 attendees at a July 22 forum on the new policy. The forum was sponsored by MIRAc (Minnesota Immigration Rights Action Committee) and hosted by the Assumption Church in Richfield. Volunteer speakers from several local organizations were on hand to explain the new policy and field questions.

Emilia (who preferred to give her first name only), a volunteer from NAVIGATE encouraged her fellow undocumented students to practice solidarity as they can help each other to dispel the myth that undocumented students can’t receive a higher education. She enthusiastically describes the new policy as “definitely a meaningful victory but there is still a lot of work that we have to accomplish. As an immigrant, I feel committed to help our communities’ voices be heard and contribute to the overall community’s search for social justice.” She plans to continue assisting students in finding resources to continue their education both through her participation in NAVIGATE and through her personal assistance to fellow students at MCTC and Normandale, where she studies political science.

Israel Esquivel, a representative from the Mexican consulate in Saint Paul, warned undocumented individuals to exercise extreme caution in soliciting legal assistance regarding the new policy. He predicted that unscrupulous individuals are going to attempt to take advantage of uninformed consumers and collect fees for submitting applications when none exist yet. His recommendation was to only seek legal counsel from qualified individuals, and he said the Mexican consulate can provide recommendations.

Rachel E.B. Lang, a volunteer participant in the forum and an immigration lawyer and member of the National Lawyers Guild, explained to participants what they would need to qualify for the program. She explained the basic requirements (arrival before the age of 16, living continuously in the U.S. for the past five years, current age between 15 and 30, honorary military discharge or current student/graduate of high school or college, passing a criminal background check) yet admitted that there are still a few requirements of the new policy which remain undefined. For example, the federal government has yet to define who may be ineligible for deferred action due to having committed “serious misdemeanors” or making “threats to national security.”

All of the speakers at Sunday’s forum, as well as the organizers at MIRAc pledged to continue assisting individuals in interpreting this new policy. Brad Sigal, a founding member of MIRAc, says plans are in the works for two more similar forums (dates to be announced) to assist the thousands of Minnesotans who may qualify for deferred action. “At this point, there’s a lot of questions more than anything,” Sigal said. He describes the new policy as “not enough. It’s not legalization but it’s the first step in the right direction and the struggle continues.” Sigal is optimistic about how Minnesota at large may benefit from the deferred action policy, stating, “A generation of people who have grown up in Minnesota, and are Minnesotans in every way except for one piece of paper, can now come out of the shadows and work at least, and continue to struggle for justice for their families.”