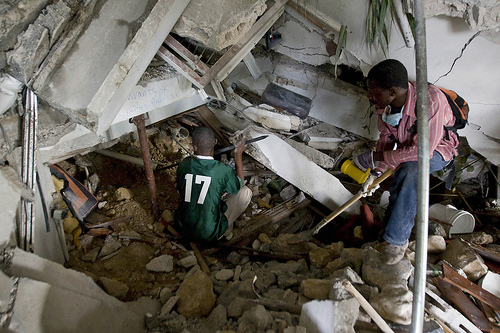 Pat Robertson generated outrage last week when he said he believes Haiti’s problems stem from a pact the nation made with the devil in 1804, but his remarks aren’t unique among evangelical Christians, even in Minnesota. While not all subscribe to the view that Satan is to blame for last week’s devastating earthquake, some say Haiti’s salvation will only come about if its inhabitants abandon their Vodou religious practices and turn to Jesus Christ.

“Craig connected the dots and asked Pastor Dan [Schmitt] and Adoration to consider joining forces to help MN Teen Challenge with their leadership training center,” Adoration’s Web site says. The site, which praises the partnership with MNTC, attempts to get to the root of Haiti’s problems:

This former French colony overthrew their French slave owners through the only successful slave uprising in modern history and the nation of Haiti was born. While the revolution against slavery was commendable, the manner in which it was achieved was deplorable. On August 14, 1791, a group of houngans (voodoo priests), led by a former slave houngan named Boukman, made a pact with the Devil at a place called Bois-Caiman. The founding fathers and others present vowed to exterminate all of the white Frenchmen on the island. They sacrificed a black pig in a voodoo ritual with hundreds of slaves drinking the sacrificial pig’s blood. In this ritual, Boukman asked Satan for his help in liberating Haiti from the French. In exchange, the voodoo priests offered to give the country to Satan for 200 years and swore to serve him. On January 1, 1804, the nation of Haiti was born and thus began a new demonic tyranny.

MNTC has distanced itself from Adoration’s claims.

Spokesperson Eric Vagle told the Minnesota Independent, “We absolutely do not hold to those views on Haiti.”

Another example of an evangelical view of Haiti’s problems comes from the Minnesota Family Council. John Helmberger, the chief executive officer of MFC, wrote on the organization’s blog that Haiti must become a Christian nation in order to thrive. Helmberger notes a column by New York Times columnist David Brooks, where Brooks asserts that a culture change is needed to tackle pverty in Haiti. While Brooks doesn’t insinuate that evangelical Christianity is the answer, Helmberger responds that it is:

One is that there is probably no more stark illustration of the profound impact a people’s worldview can have on them economically, socially, culturally, and spiritually than the contrast between Haiti and the Dominican Republic, with which it shares the island of Hispaniola. Haiti has been chronically impoverished and resistant to improvement since long before last week’s earthquake, and New York Times columnist David Brooks correctly points to the dominant voodoo religion as a cause. Why make plans or try to improve yourself or your community if your life and your society are at the mercy of capricious spirits that may negate your efforts on a whim? But the truth is that Haiti needs more than relief. It needs redemption and transformation. Haitians need to be delivered from the false and destructive spirituality that has held them and their nation in bondage for two centuries and made them impervious to change or improvement. They need to be “delivered… from the domain of darkness and transferred… to the kingdom of [God’s] beloved Son, in whom we have redemption, the forgiveness of sins” (Colossians 1:13-14). They need to be “transformed by the renewing of [their] minds” with the truth of the gospel, through faith in Jesus Christ (Romans 12:2).

Within a day of its first appearance that blog post was deleted.

The post … was a response to an op/ed piece by David Brooks in NY Times. Brooks piece was viewed as insensitive to the Haitian people as they struggle with this incredible tragedy. We felt our commenting on the same topic at this time might come across as insensitive as well. Now is a time for compassion. This is a time to reach out and help the Haitian people rather than try to address the historical, social conditions of the country.

MFC also removed two other posts that seemed to defend Robertson’s comments – or at least criticized his critics: “Pat Robertson, Haitian earthquake, “A Curse”, and media bias” and “Haiti disastrous earthquake. What did Pat Robertson, Danny Glover, and the White House say about it? What would Jesus say?” are still on Google’s cache.

Robertson, too, has found it necessary to revisit, if not recant, his initial statements about Haitians. Robertson, via his Christian Broadcasting Network company, released this statement late last week:

On today’s The 700 Club, during a segment about the devastation, suffering and humanitarian effort that is needed in Haiti, Dr. Robertson also spoke about Haiti’s history. His comments were based on the widely-discussed 1791 slave rebellion led by Boukman Dutty at Bois Caiman, where the slaves allegedly made a famous pact with the devil in exchange for victory over the French. This history, combined with the horrible state of the country, has led countless scholars and religious figures over the centuries to believe the country is cursed. Dr. Robertson never stated that the earthquake was God’s wrath. If you watch the entire video segment, Dr. Robertson’s compassion for the people of Haiti is clear. He called for prayer for them. His humanitarian arm has been working to help thousands of people in Haiti over the last year, and they are currently launching a major relief and recovery effort to help the victims of this disaster. They have sent a shipment of millions of dollars worth of medications that is now in Haiti, and their disaster team leaders are expected to arrive tomorrow and begin operations to ease the suffering.

The insinuation that some Haitian religious practices are to blame for Haiti’s problems are not new. In fact, many religious writers have used Haitian poverty and corruption as evidence that Vodou is “demonic” and that the nation has made a pact with Satan, often minimizing the impact of colonialism and the tendency for other nations to meddle in Haiti’s affairs.

Today, 96 percent of Haitians are Christian (80 percent Catholic, 16 percent Protestant), according to the CIA Word Factbook, which also notes that “roughly half” of the population practices Vodou.