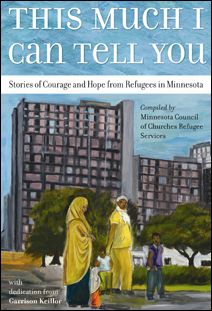 Imagine a 5-year-old child in a far away land running for his life.

Then read this bit from the real-life account, the childhood memory of a man in his late 20s who asks to be called Kaw Lah, a refugee from the country renamed Myanmar, now making a life for himself in the Twin Cities.

“When military troops came to attack our villages, we had to run away. During that time I was five, maybe six years old. I just knew we were not eating or playing. The old people would say, ‘We have to go,’ and we would go and sleep in the cliffs.”

Kaw Lah’s compelling telling is one of 16 memoirs gathered from among Minnesota’s newest refugees from nine countries collected in a book called “This Much I Can Tell You: Stories of Courage and Hope from Refugees in Minnesota,” to be released June 1.

That excerpt from their website entices me to read the stories of trauma and tragedy as well as joy, hope and dreams.

The book is the brainchild of folks who work with refugees and the storytellers are all people who were assisted by the Minnesota Council of Churches Refugee Services, a local affiliate of two agencies contracted by the U.S. Department of State to resettle refugees in the U.S.

‘You listen to the news differently’

You might say the stories bring the news to our doorsteps. “I think when you’re aware, when you know more about refugees, you listen to the news differently,” says Naomi Thorson, a story collector for the project, which includes the words of women and men from Somalia, Bhutan, Iraq, Cameroon, Liberia, Zimbabwe, Ethiopia, the Democratic Republic of Congo and the country formerly called Burma.

What better time than this, when military actions and wars around the world and threats of violence force mass movements of people? Last week the U.N. reported more than 4,500 refugees arriving in northern Chad after crossing hostile desert to escape violence in neighboring Libya. The U.S. Department of State keeps a refugee tally, along with documenting U.S. efforts to reduce those numbers. Since 1979, more than 90,000 refugees and asylees have come to Minnesota.

Still, numbers only quantify the problem. It’s the people behind them who are the real story, realized Rachele King, director of Refugee Services, at the Minnesota Council of Churches, and other staff.

“As Minnesotans, we know refugees as neighbors, as coworkers, as customers, or as friends. But we don’t know their stories,” King says. “We don’t know about their life before they became refugees or what they went through to find the safety we enjoy.”

Featured on the website is praise for the project from U.S. Rep. Keith Ellison, Bishop Brian Prior of the Episcopal Church of Minnesota and author Julia Dinsmore. She says:  “Our stories are sacred, without them we forget who we are. All respect to the brave beings who survived hells of brutality…and lived to tell us.”

Sharing those stories became a priority a couple of years ago, and staff started asking for storytellers, with their efforts bolstered by a $7,000 grant to pay for editing and for printing by Beaver’s Pond Press. The $15 book is available here.

Story collecting began with Kristin Ginger, then was passed along to Thorson, an AmeriCorps Vista volunteer and 2010 Bethel University graduate who harvested their stories, most often going to their homes to share a cup of tea and a list of questions.

Sometime just a suggestion – “tell me about your childhood” – would release a torrent of words, she says, other times these displaced persons would need more coaxing. It was up to them how personal their stories would get, up to them whether they felt comfortable or safe using their real name or wanted to choose a pseudonym.

“Yes, there were moments of sadness and grief for what had been lost, but I also laughed a lot with the storytellers as they told funny stories from their lives both before and after becoming refugees,” says Thorson.

And they’re survivors, she said, persevering against the odd and infused with hope for the future.

Telling of their life stories became a reminder how far they’ve come, she said.

Still, Thorson wishes there was a way to share, too, the tapes of these courageous folks telling their stories. “There is no substitute for hearing someone’s voice. I just wish others could hear them too, the inflection, the energy, the emotion.”

Especially, she said, she was affected by a mother, whose face and body registered her inner turmoil as she told how she was forced to leave her children behind. “It was gripping.”

“I feel very privileged in being one of the people to hear the stories first-hand,” Thorson says.