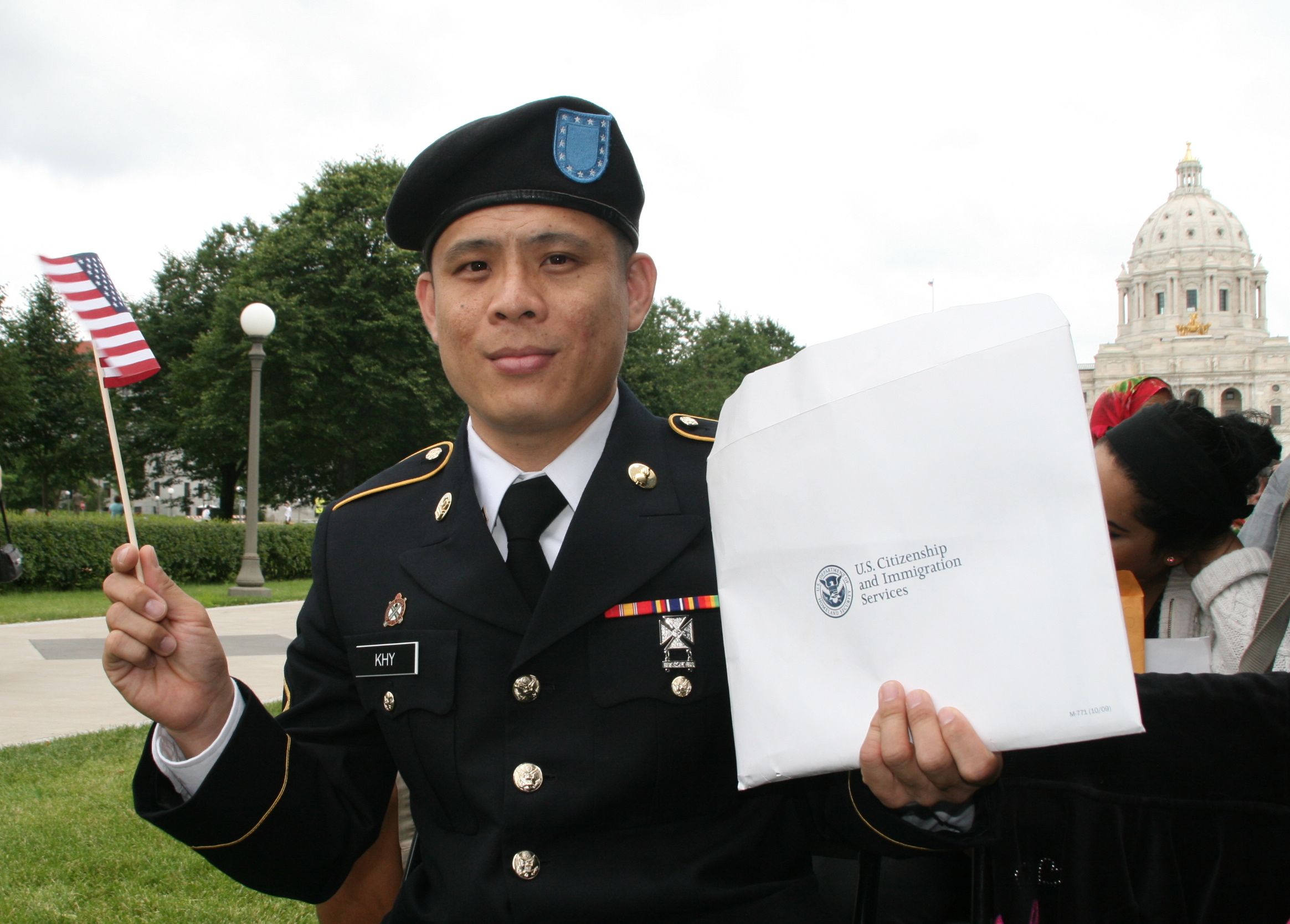 Sitting in folding chairs under a large white tent pitched in front of the Minnesota State Capitol, 40 soon-to-be citizens sat listening to speeches by Congressman Keith Ellison, U.S. District Court Judge Donovan Frank and others. The judge, who would give the oath of naturalization, asked each person to stand as he read the list of the countries of origin. Argentina. Tajikistan. Germany. Egypt. Israel. Mexico. Romania. Senegal. Guatemala. Burma. They came from 30 nations, but on that sunny morning, they ceased to be from somewhere else and became Americans. June 29, 2013 would be a day they’d never forget.

The ceremony, part of the Immigrant Law Center and the U.S. Citizenship and Immigration Service’s Citizenship Day of Welcome, was one of three special local Independence Day ceremonies where a total of 120 immigrants recited an oath to become citizens. Across the country, between June 29 and July 5, more than 7,800 candidates, at more than 100 locations, will become citizens at one of these special ceremonies.

Htoo Htoo Eh left Burma and its political troubles behind. She knew the exact date that she arrived in the United States. “I came on July 24th, 2007,” she said. “I am really happy. The USA is my first country now. We’re going out with my family to celebrate.”

For many, gaining American citizenship was a lifelong dream. Some came as refugees and some left behind good lives in their home countries. All of them determined that life would be better if they became Americans. For many, it was the promise of freedom that brought them to this moment.

Official packets handed out to each prospective citizen contained a voter registration form, and a member or the League of Woman Voters stood by to help, making sure that everyone filled out and handed in their paperwork.

Taking the oath of citizenship is the final step of a multi-year process. Immigrants have to be lawful permanent residents, live in the United States for five years (three years for those married to an American citizen,) pass a test to prove that they’ve learned to read, write and speak English and have a knowledge of American government and history that would stop many native born Americans.

Less than a week earlier, Leo Barbosa da Paixao from Brazil had taken his oath. “The ceremony was beautiful,” he said. “There was so much diversity. People came from almost 100 countries. It was very emotional and felt welcoming.”

“There are a lot of benefits being a citizen, a lot to gain,” he said. “When I first came here as a visitor it never crossed my mind to become a citizen. When you don’t live here you can have the wrong idea about America. I thought people would be unfriendly, but I met a lot of warm people. I have a son who is two years old. He was born here. He’s a citizen. I miss my culture in Brazil, but I am very happy here.”

Private First Class Tykun Khy from Phnom Penh, Cambodia, joined the U.S. Army almost three years ago and came to the ceremony wearing his dress uniform. Khy is making the army a career. “It’s important to me. Being a citizen will give me the right to do anything I want to do, according to the law,” he said. “And in the U.S. Army, as a citizen, I can get secret clearance and a better job.” His Facebook page was filled with photos of the ceremony and congratulations from friends.

“It’s you who bless us today by becoming citizens. We need you,” Frank said. “And now that you are citizens, remember to lend a caring hand and reach out to those in need. Be kind.”

The ceremony began with remarks and the singing of the Star Spangled Banner. It ended with the Pledge of Allegiance and a recording of Lee Greenwood singing “Proud to be an American.” There wasn’t a dry eye in the house.

“It was so amazing. I am so happy,” said Agnes Herman from Liberia.  She had been waiting for this day since she arrived in Minnesota in 2007, she said. “I am so proud to be an American. My husband has lived in Minnesota for 15 years and now, and I’ll go home and we’ll have kids to grow up in this wonderful nation.”

According to Wikipedia, the Emma Lazarus poem quoted in the headline was “written in 1883 and, in 1903, engraved on a bronze plaque and mounted inside the Statue of Liberty.”

The New Colossus
by Emma Lazarus

Not like the brazen giant of Greek fame,
With conquering limbs astride from land to land;
Here at our sea-washed, sunset gates shall stand
A mighty woman with a torch, whose flame
Is the imprisoned lightning, and her name
Mother of Exiles. From her beacon-hand
Glows world-wide welcome; her mild eyes command
The air-bridged harbor that twin cities frame.
“Keep, ancient lands, your storied pomp!” cries she
With silent lips. “Give me your tired, your poor,
Your huddled masses yearning to breathe free,
The wretched refuse of your teeming shore.
Send these, the homeless, tempest-tost to me,
I lift my lamp beside the golden door!”

Htoo Htoo Eh and family: American and Minnesotan, too

One from Cambodia, two from Belarus, all American now

Xe Moua from Laos, with her children

Lining up for picnic food