The National Assessment of Educational Progress (NAEP) released their annual results this week. There were several very interesting things, but you had to read pretty deep to find them. Some of the results were surprising, and some reinforced things we already know.

Probably our most important finding is that Minnesota still struggles with a racial achievement gap. There is also a poverty gap, but the racial gap eclipses that. We need to find a way to better educate our minority communities. Minnesota may be uniquely challenged in this because our “African American” community includes middle class, generation-ally poor, recent refugees, and students from numerous African communities. The needs and issues of a African American from generations of poverty and a new immigrant are not always the same, but they are all classified the same.

As a math teacher, one thing struck me in the battle against the achievement gap. Along with student scores, they surveyed how much students were allowed to use technology, specifically calculators. Use ranged from none at all, intentional and restricted use, and indiscriminate use. Students who were allowed intentional, but restricted use of calculators scored significantly better than students who were not allowed to use calculators at all. You can see from the following graphic that reduced lunch eligible students have far less access to technology when we know that students who are comfortable with technology score significantly better.

As stated before, Minnesota does very, very well in Mathematics. In Grade 4 Mathematics, Minnesota scored in the top four out of 51. (District of Columbia included) The report will state that there were no appreciable gains from last year. This does not, however, give any ammunition to education critics. As a state already near the top, gains will naturally come more slowly. In addition, it is more useful to look at long term growth. Year to year there is no significant growth, but over the long term Minnesota students have seen inredible growth in math. From 1992 until today the number of proficient or better fourth graders increased a respectable 27%. The black-white gap was 31 points last year and 38 points in 1992. We do well in math, but this is still our national shame. 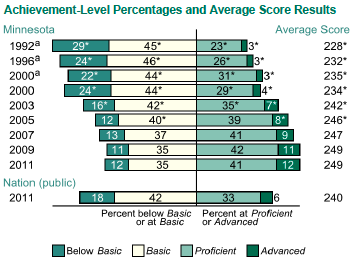 Grade 8 Mathematics are very similar. Year to year is insignificant, but long term growth is promising. There was a 24% increase in proficient and above from 1990-2011. Just like fourth graders, our 8th graders are in the top four in math. Also just like in fourth grade, our black-white gap is horrible: a 35 point gap, down from 41 in 1990. A worse sign, our poverty gap actually increased from 18 in 1990 to 27 points last year. 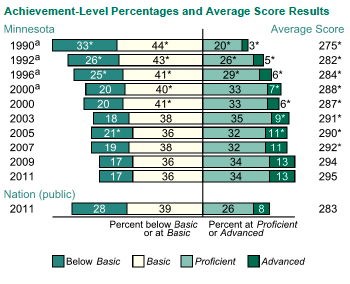 4th grade and 8th grade reading scores seem more concerning. Although they are not terrible, there has been no growth in our reading scores in the last dozen or more years. In reading, we are truly average. We haven’t improved much in many, many years, and our black-white achievement gap is also terrible. An interesting question to ask might be why we are so far above average in math, but so average in reading. 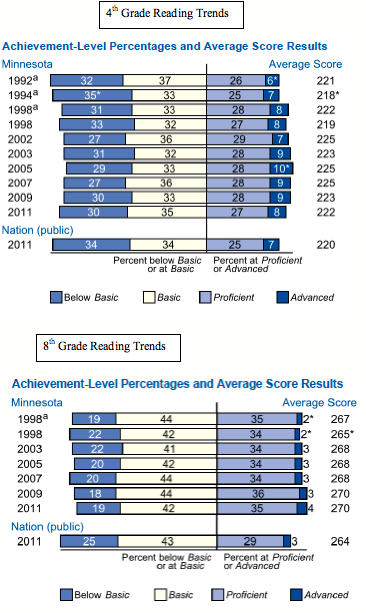 The bottom line is that we cannot really tell too much new about the latest national report card. We are good at math. We need to improve our reading. Our achievement gap needs to be our number one goal.