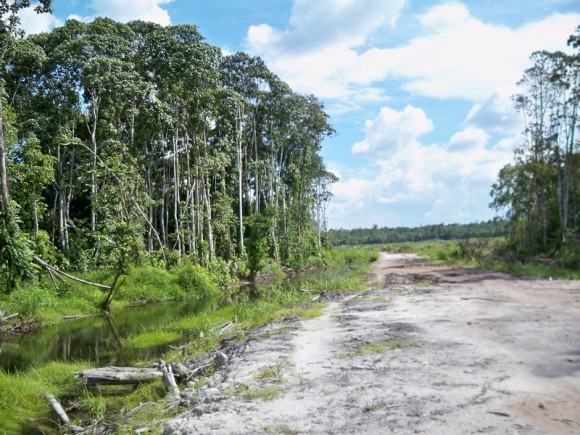 Local agri-giant Cargill has encountered a series of public relations hurdles lately. Just last week the Minnetonka-based company announced it had reached an undisclosed settlement with Stephanie Smith, a former dance instructor from Minnesota who was left paralyzed and with brain and kidney damage after getting E. coli from a hamburger processed at a Cargill plant. (The story didn’t appear in local press until after the New York Times did an investigation that led to a Pulitzer Prize.)

And the week prior to the settlement with Smith, five people from the Rainforest Action Network (RAN) locked themselves inside the Cargill headquarters, demanding to speak with CEO Gregory Page about what the environmental organization says is Cargill’s continued destruction of rain forests for the harvesting of palm oil, for which Cargill is the nation’s number-one importer.

The protest was a response to a damaging RAN report released on May 4, in which the organization calls company’s claims of sustainability bogus by claiming, among other things, that Cargill is operating a plantation in Indonesia without proper permits; that Cargill is clearing and burning rainforests and peatlands and damaging the environment and local communities in Borneo and Indonesia; and that Cargill has not been transparent about the plantations it owns.

On May 5, Cargill responded on Twitter, firing off a Tweet that simply said, “Cargill sets the record straight on false allegations” to anyone discussing the report on Twitter. Provided was also a link to Cargill’s extensive response, which denied all of the allegations in the RAN report. Instead, Cargill says it does not burn rainforests; it does not operate any undisclosed plantations; it doesn’t operate against local owners’ wishes; and it does not operate outside of Indonesian law.

RAN’s Agribusiness Campaign Director, Leila Salazar-Lopez, says Cargill is being dishonest in the face of accusations.

“We don’t want to make this a tit for tat he-said/she-said argument,” Salazar-Lopez tells the Minnesota Independent. “But the fact of the matter is, pictures and maps don’t lie. We continue to stand by the findings in our report that Cargill is responsible for rainforest and peatland destruction in Indonesia and that Cargill has violated the Roundtable on Sustainable Palm Oil (RSPO) principles and criteria, Indonesian law, and its own palm oil commitments.”

One of the biggest issues Cargill continues to deny, Salazar-Lopez says, is that Cargill subsidiary, CTP Holdings, has cleared and burned rainforests and peatlands for palm oil plantations despite Cargill’s claim of sustainability. The company says the area is not designated as primary forest, a claim Salazar-Lopez refutes.

“The Ministry of Forestry in Indonesia believes that those lands are forests,” Salazar-Lopez says. “So Cargill saying that their land is not any where near rainforests is absolutely not true. Forests have been cleared at ISK [Indo Sawit Kekal] as recent as February 2010, since Cargill/CTP acquired ISK in 2005.”

Susan Eich, a Cargill spokesperson, says the company stands by its initial response to the report. “We think the allegations are false,” she told the Minnesota Independent. “We have answered every specific point in there. We take issue with that report and we stand by our response… We do not clear rain forests.”

RAN maintains that documentation it has obtained shows otherwise.

Relying on registries and permits Indonesian local government offices in Indonesia and from Indonesia’s Ministry of Forestry, RAN says Indo Sawit Kakal is located in a production forest area. In addition, these areas are protected by the Indonesian Ministry of Forestry from palm oil production, and Salazar-Lopez says that while Cargill did not obtain a license to cut the timber in this area, the company still deforested more than 10,500 hectares in that region since 2005.

A Google map “showing that PT Indo Sawit Kekal is located in a production forest area,” according to RAN. Click to enlarge.

Salazar-Lopez says the destruction is devastating for a number of reasons. For one thing, despite its size, Indonesia is the third largest greenhouse gas emitter in the world, all of it a result of intense deforestation and gas emissions from peat bogs. For another, Indonesia is home to numerous endangered species, including the orangutan. And furthermore, Indonesian communities are being adversely affected by the destruction of farmland, rivers, and forests, she says.

Matilda Pilacapio, a human rights and environmental advocate and former government official from Papua New Guinea, has been an outspoken opponent of Cargill’s practices in her homeland. In September of 2009, she brought her story and images to the Twin Cities. Cargill, which operates three palm oil plantations in Papa New Guinea, has been recently targeted by Papa New Guinea residents and local and national NGOs, which accuse the Minnesota company of polluting rivers and deceiving local communities.

Still, despite the NGO accusations and outcry from local communities over the last year, Salazar-Lopez says Cargill still operates in violation of the company’s own claims of sustainability and corporate responsibility, clearing forests in Indonesia as recently as February of this spring.

“If Cargill is going to claim they are committed to sustainable palm oil, they need to provide it,” Salazar-Lopez says. “There is a reason [Cargill’s Harapan Sawit Lestari] HSL plantation hasn’t been RSPO certified-because they have problems. The International Monetary fund has placed a moratorium on palm oil financing because they are major problems with it worldwide.”

Salazar-Lopez says that if Cargill is truly sustainable, the company will also commit to ensuring their plantations and suppliers are sustainable.

“Unilever has supported that. Kraft and Nestle also canceled contracts with suppliers that aren’t sustainable. Many other companies have committed to holding their contractors responsible for sustainable palm oil. Why can’t Cargill do the same? They are the number one provider in the country.”