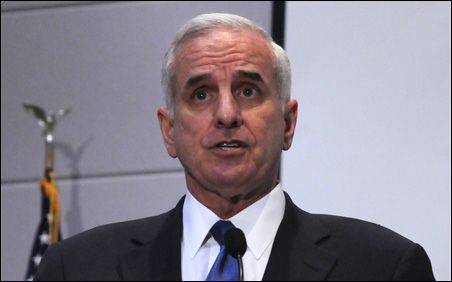 Gov. Mark Dayton outlined his budget at the Department of Revenue Building on Tuesday.

The Minnesota budget battle now comes down to this: Fear versus Fair.

This morning, Gov. Mark Dayton presented a budget that fulfilled his one major campaign promise. In the name of fairness, he wants to tax the rich.

Over and over again, the governor and some of his commissioners talked about the “balance” and “fairness” in the plan the governor unveiled to tackle the state’s $6.2 billion deficit.

Sparing aid to cities and schools

He would raise the taxes on the top 5 percent of wage earners in the state by about $3 billion and make up the rest through budget cuts that spare Local Government Aid but make cuts to higher education and even nursing homes as well as trim the state workforce by 6 percent. K-12 education would receive the increase that Dayton promised throughout his campaign.

“This budget proves I’m a man of my word,” he said in unveiling the plan.

Dayton repeatedly said that he believes the rich will see the “fairness” in his fourth tier for couples earning $200,000 (a rate boost of 1.9 percentage points) and the additional surcharge of 3 percent on incomes of more than $500,000 (for a married couple). Additionally, he wants to impose a property tax bump on those living in homes valued at more than $1 million and he wants to tax snowbirds, those who declare residency in low-tax states, such as Florida, but spend considerable time “back home” in Minnesota.

He also repeatedly said that 95 percent of Minnesotans will face no tax increase and that his plan should prevent further increases in property taxes and fees, which have skyrocketed in recent years.

In Dayton’s eyes, it’s all about fairness.

But the Republicans were quick to counter. Their underlying message emphasized a fear factor – fear, that is, of the business community’s reaction and the ripple effects from the uncertainty they say the tax proposals will cause.

With “the highest taxes” in the country, Republican legislative leaders predicted that Minnesota would not be able to compete for new businesses and new jobs. They predicted that the Dayton plan would chase old businesses out of the state.

Those 95 percent who wouldn’t see a tax increase under the Dayton plan?

“Making Minnesota the highest-tax state is not just going to affect the 5 percent,” said House Majority Leader Matt Dean. “It will affect the other 95 percent, too.”

Added House Speaker Kurt Zellers: “Moms and dads are going to be worried about losing their jobs.”

In the eyes of Republicans, it’s all about making Minnesota more business-friendly. The wealthy are the job providers.

“This [Dayton’s] proposal puts your faith in government,” said Zellers. “Our faith is in the job providers.”

Both Dayton and Republicans will take those messages on the road Wednesday. It will sound a whole lot like the campaigns that we thought had ended in November.

It was, of course, the voters that set all of this up by dividing political power between a DFL governor and a Republican-controlled Legislature. And both sides are repeating the messages that made them winners.

Neither side won by much.

Dayton at a disadvantage

Dayton faces a couple of big disadvantages as he heads out to sell Minnesota on why his plan his best for the state’s future.

First, he’s the one that has to defend a budget that includes something for everyone to dislike.

For example, big-hearted as he is, Dayton still had to make cuts to nursing homes and increased surcharges on those facilities to arrive at a balanced budget.

The ink had barely dried on the proposal when Patti Cullen, president of Care Providers of Minnesota, attacked it.

“If Governor Dayton’s proposal were to become law, the caregiver wages and benefits will be cut again and there will be jobs lost,” she said. “In addition, nursing facilities on the brink of closure are certain to go over the edge.”

But hey, even Dayton doesn’t like his budget: “This is not ideal, but it’s the best I’ve been able to achieve.”

The second problem for Dayton is that DFL legislators refused to embrace his proposal.

They hemmed. They hawed. They said they’d have to see the details.

Thissen argued that before anyone makes a decision about whether they support Dayton’s budget proposal, the Republicans should have to show what their cuts-only budget would look like.

“The focus should be on the Republicans,” he said. “Can they produce an all-cuts budget?”

The GOP lawmakers say they can, of course.

But it’s easier to say it than produce it.

Additionally, it’s easier to attack Dayton’s budget than to come up with a counter-proposal.

Republicans hemmed and hawed when asked when they would come forth with their master budget plan.

In the meantime, they’ll attack the Dayton proposal. “This is a feeble and pathetic attempt,” said Zellers.

But Republicans have a bit of a problem, too.

Dayton argues that his fourth-tier income tax increase on couples making taxable incomes of $200,000 or more will merely put the top wage earners in line on a percentage basis with what the middle class is paying.

Republicans have to argue that somehow it’s reasonable to protect the wealthiest from paying an equal share while at the same time cutting programs for the most vulnerable.

Dayton surely will receive help on his campaign from local government officials and school administrators.

But Republicans can turn to their allies in business, Tea Party Patriots and other conservatives who think it’s time “government lives within its means.”

All of this will end. Dayton, and, to a lesser extent, Republican leaders, said that the May 23 close of the legislative session leaves plenty of time for talk.

But right now, it’s hard to see where the governor and the Legislature can come together.

They can’t even agree on the percentage size increase Dayton seeks for the 2012-13 biennium.

Dayton says his budget calls for a 7 percent increase over the current biennium, a fairly modest amount.

Republicans don’t count the one-time federal stimulus money that helped balance the budget in the current biennium, nor did they count the nearly $2 billion that was shifted into the future by last year’s Legislature.

But wait a minute. Wasn’t it Gov. Tim Pawlenty who signed off on that budget-balancing act? Was he irresponsible and incorrect?

Koch muttered something about her viewing things as a legislator and quickly moved on to the next question.

So what it all means is that agreement will come hard. And at this moment, it’s the governor more than the Republican legislative leaders who seem to understand the need for compromise.

“This will not be the budget enacted on May 23,” Dayton said after the long, exhaustive presentation of his budget. “Compromise means you have to give up some of what you want and some of what you promised.”

This debate is about “fundamental principles. … This [the governor’s proposal] is just a bad idea.”

Sometime in the next couple of months, the Republicans promise to put forward their own idea.