Richard Venberg, standing in front of the solar-powered workshop he built. (Photos by Ashley Kuehl)

On October 2, 84 of Minnesota’s homes and businesses opened to the public to show off their solar-powered energy technology. The Minnesota Solar Tour, organized and sponsored by the Minnesota Renewable Energy Society (MRES), was part of the 15th annual American Solar Energy Society’s National Solar Tour.

The goal was to show visitors how people have installed technologies and adapted their homes and companies to make use of renewable forms of energy. Though the tour focused on solar, it was certainly not the only form of sustainable energy used in these buildings. Residents and builders were on hand to explain the technologies and to answer any questions for visitors interested in trying renewable energy sources for themselves. The Twin Cities metro area alone hosted 27 open houses, and two that I visited demonstrate just what a determined person can build.

Richard Venberg is a sustainable design/build architect who lives in the University community of Minneapolis. His house wasn’t a prime candidate for solar panels, because the roof doesn’t face south, the most important requirement for a solar energy installation. Instead, Venberg tore down his freestanding garage. Then, using the dismantled pieces and a few more, he built a new workshop, incorporating four kinds of solar power. 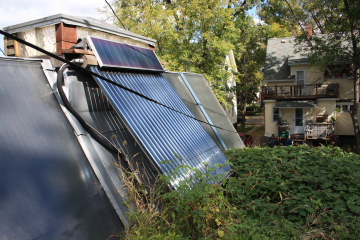 View from the living roof on top of Richard Venberg’s solar-powered workshop. Solar panels to the left provide radiant heat, water heat and electricity. Venberg’s house, which benefits from solar hot water, is in the background.

The roof holds three types of solar panels, which collect and convert the sun’s power to electricity and radiant heat. Tubes transport energy through the walls and floor. Richard points out that radiant heating, which heats objects such as walls and floors, is more efficient than heating the air. Think of opening an outside door in midwinter. The warm air simply escapes. But if heat is stored in the walls and floor, less energy is lost.

In addition to the solar collectors, Venberg built a “living roof,” made up of a waterproof membrane under two feet of dirt, on top of the workshop. The vegetable garden planted there makes use of good old-fashioned photosynthesis, allowing Richard’s family to grow strawberries, cucumbers, tomatoes and pumpkins.

Venberg connected the workshop’s solar heating tubes to his house, to heat the family’s water. He also installed a small solar-operated fan in his attic. When sunlight hits the collector, the fan automatically runs. Since this installation, summer temperatures in the upstairs bedrooms have decreased by about 15 degrees. As a result, there’s been no need to run the air conditioner.

Another Minneapolis resident is starting from scratch in making her own “green” home. In 2008, Barb Lutz bought a lot in North Minneapolis, where she has since designed and built an environmentally sustainable, handicap-accessible house for herself and her mother. They moved in late last year, though the work is far from finished. The whole project has been designed with an eye for sustainability. Her roof contains nine solar panels for radiant in-floor heating and hot water and 18 photovoltaic solar panels for electricity. 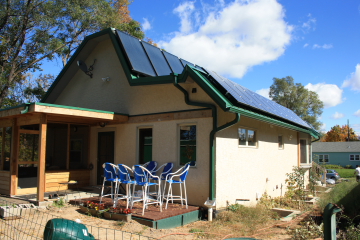 Barb Lutz designed this house herself. The solar panels on the roof collect energy for electricity, in-floor heat and water heat. Rainwater flows through the gutters to an underground collection cistern. Raised garden beds to the right provide produce.

The materials used for building, which include clay walls and recycled cupboards and doors, also contribute to its small ecological footprint. Other design choices include a rain collection system with an underground cistern, to water the lush vegetable garden that makes up the back and side yards. Eventually, Lutz will build a living roof over her screened back porch.

Lutz says her monthly energy bill hovers around a dollar, even when running the air conditioner in a sweltering Minnesota summer. She’s hooked up to Excel Energy’s grid, as are many who use renewable energy sources. If a resident in Minnesota produces more energy than she can use, the local electric company is required to buy it back at retail cost. The energy goes back into the grid, to be used in other locations, such as a neighbor’s home. Residents with solar collectors might be pumping excess energy into the grid on a sunny day, but taking some back at night or when it’s cloudy.

Ready to sign up? A meeting with a sustainable energy consultant can help evaluate a home or business to see if solar is right for the location. A consultant will first check for a south-facing location to mount the panels. This location must also receive plenty of sun. That gorgeous shade tree in a neighbor’s yard might be a problem, especially as it grows.  The consultant will also discuss options, which include solar electric, water heater, or in-floor heating.

Though energy bills should decrease, installing solar energy technology is not a surefire way to save money on energy costs. Over time, a homeowner may earn back the cost of an installation, but solar panels are still expensive. State and federal rebates are definitely worth investigating, and MRES has more information, but these rebates won’t cover the full cost.

Ramy Selim, green energy consultant and owner of Sunny Day Earth Solutions, says individual solar panels cost about $800-1200 each, but are often sold as part of a whole system, rather than individually, so the total cost may vary. Secondhand panels may cost less, but are less efficient than newer models. Ramy himself uses solar technology in his business, but it’s not to save money. He says he wants to show people that solar works here in Minnesota.

Barb Lutz spent more than $60,000 on her solar system, before any rebates. But it’s not about the money for her either. Sustainability “is the right thing to do,” she says. Her goal is an environmentally friendly home that meets her needs, and the solar energy system is just one component of that.

Richard Venberg doesn’t seem concerned with costs, either. He hasn’t applied for any available state or federal rebates. Venberg seems to love the design challenge, though he gets frustrated that our standards for energy efficiency are changing at such a slow pace. Around 1910, Venberg says, when many Minneapolis homes were built, insulation was not even required, so most houses didn’t have it. By the 1930s and ’40s, fiberglass insulation was part of building codes. And our codes haven’t changed much since then. Venberg points out that heating and cooling our homes and office buildings accounts for about 60 percent of the country’s energy use, and he believes that focusing on reducing this energy expenditure could make a real difference.

Renewable energy technology is a growing industry here in Minnesota, and many more resources are available than even a few years ago. Check out the links in the sidebar to learn more, and perhaps next year you’ll host your own Solar Tour open house.