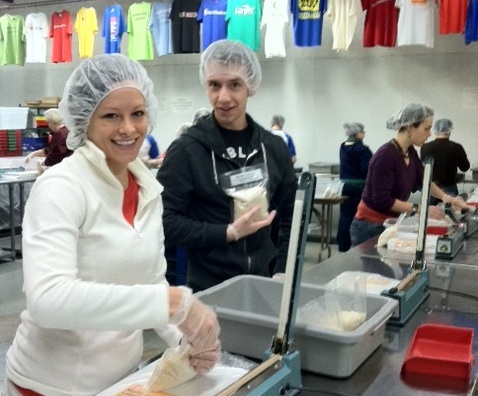 “Your pay will be low; the conditions of your labor often will be difficult. But you will have the satisfaction of leading a great national effort and you will have the ultimate reward which comes to those who serve their fellow man,” President Lyndon B. Johnson said to the first group of 20 AmeriCorps VISTA members in 1965. VISTA (Volunteers in Service to America) was the idea of President John F. Kennedy in 1963, and President Johnson made this vision a reality as a part of his “War on Poverty” less than two years later. Since then, VISTA has grown to become just one of many programs under the AmeriCorps umbrella which now encompasses 15 million members across the country.

FULL DISCLOSURE: Naomi Krueger is currently an AmeriCorps VISTA Leader at the Minnesota Council of Churches Refugee Services in Minneapolis.

“I’m not sure if people realize that VISTA was created in reaction to the creation of the Peace Corps. The American people said, if we can send people abroad to do this kind of work, we should be able to do this kind of work domestically and provide Americans with the opportunity to serve other Americans,” said Sam Schuth, state program director of CNCS in Minnesota.

According to a Huffington Post article by Michael Brown, the CEO and Founder of City Year, CNCS received a record-breaking 582,000 applications to service in AmeriCorps in 2011—50,000 more than the year before. Brown wrote, “Unfortunately, the overwhelming majority — 86 percent — are being turned away. Nearly one million AmeriCorps applications have been denied in the past two years alone.”

It’s not because there aren’t organizations in need of an AmeriCorps member.

“This office receives a call a day from an organization seeking a VISTA volunteer,” said Schuth. “That’s not an exaggeration. There is great interest and great desire for the community to have volunteers. Unfortunately we can’t meet anywhere close to what the demand is.” Both Schuth and Brown say the problem is a lack of federal funding.

Since 1994, more than 19,000 Minnesota residents have served more than 27 million hours, according to the National Service website. AmeriCorps members are fulltime volunteers, and receive a monthly living stipend to cover basic expenses. At the end of their service year, AmeriCorps members have the choice between a cash stipend or a Segal AmeriCorps Education Award to pay off a student loan or future education expenses. Even with this compensation, AmeriCorps members do not do it for the money.

“I chose to do AmeriCorps because I didn’t know exactly what I wanted to do, and I didn’t want to go on to grad school and get a degree in something I wasn’t sure of. I wanted to do something to give back to my community,” said Peter Pepowski, a first-year AmeriCorps State member serving with the Minnesota Reading Corps. This University of Minnesota graduate spends his days reading with and tutoring children in first through third grades at Hale Elementary School in Minneapolis.

The Minnesota Reading Corps was created through the work of AmeriCorps VISTA members whose service with the Minnesota Literacy Council (MLC) helped to build infrastructure and capacity. The MLC has sponsored VISTA members for more than 25 years, said MLC executive director Eric Nesheim.

“We never would have taken on something like Reading Corps if we hadn’t previously had national service programs that we were comfortable with taking on projects like this,” said Nesheim.

Forty VISTA members serve with MLC programs this year, and 100 positions are available for the upcoming Summer Reads VISTA program.

“[AmeriCorps is] a great program that everyone should be aware of and very proud that we’re able to do this in our society,” said Nesheim. “To not only offer the opportunity to people to get that experience, but also to have people who are willing to sacrifice and give up a year or two sometimes of their life to try to make a difference. I applaud with everyone else when our soldiers return after serving our country. I think we should also applaud VISTAs for their years of service. I think we should be very proud of what they’re doing.”

“The ICC is a peer-led organization. We’re doing this with very little money, with volunteers. We’re not getting paid, and we’re coming together, a group of 30 people, to engage these communities to facilitate connections between AmeriCorps programs. I want to tell people everywhere that it can happen and could get done in other states,” said Stimes.

More information about AmeriCorps and other programs with the Corporation can be found at www.nationalservice.gov