Thousands last week peacefully stood, marched, sang and chanted outside University of Minnesota’s Northrop Auditorium, protesting not only the tragic death of 17-year-old Trayvon Martin in Sanford, Florida, but also the violent deaths of several other Blacks in recent weeks in other parts of the country.

Third year U-M student Brianna Wilson urged the rally participants who attended the March 29 event to not “let this energy go to waste” but to “get energized…and fight for racial justice.” Ever since the Martin death made news, she said the emotions among her and others on campus “has been shocking and frustrating. You hear a lot of frustration, a lot of anger.”

Wilson recalled how a friend of hers “cried on the phone” after hearing replays of the 911 call with Martin and the man who shot him: “You could hear Trayvon in the background, screaming for help. That broke her heart, and broke my heart,” she said. 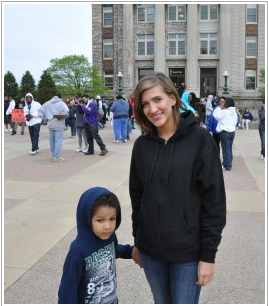 Nick Muhammad of Torch Light MN estimated at least 10,000 persons were in the Northrop Plaza. “I’m looking at the response around the country, and I think we are reaching the tipping point — I can feel it in the air,” he admitted. “It’s been a long time since we’ve seen this type of solidarity around issues like racial justice, especially here in Minnesota.”

Brittany Lewis of Occupy the Hood added that at least 15 local organizations were involved with planning the on-campus rally. “I expected a huge turnout,” she noted afterwards. “What I am excited about is seeing so many Black and Brown people come out.”

“It’s about people coming together for one cause,” added Emily Herman, age 22.

“This is way more than I expected. I expected 30 people to be here. I think the diversity is great,” said a surprised Jenny Belsito, one of the rally organizers. She also was among the parade of speakers who spoke at the rally. “It was really powerful that the speakers were able to connect our own personal stories to what happened to Trayvon.”

University of Minnesota Senior Vice President Dr. Robert Jones pointed out, “There hasn’t been this many people on the mall in 40 or 50 years. We were very glad to help out. The university is the place where people can convene and have this kind of meeting and dialogue.” 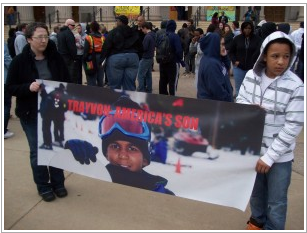 Retired professor Mahmoud El-Kati marveled, “The last time I saw this [size of a] crowd in Minnesota was when Rodney King was brutalized. It’s a wonderful thing to see.”

The outside rally was orderly, but everyone there from speaker to attendee apparently was on one accord.

“We just want a resolution,” said Winnie Gregory of Sioux Falls, South Dakota. She joined her daughter Nicole Hernandez, Coon Rapids, who heard about last week’s rally on KMOJ. “The first thing [that] comes to mind is injustice,” said Hernandez.

Belsito told the outdoor audience that racial profiling must be addressed.

“We hear about millions of people who are wrongly accused. You are guilty until proven innocent. This story is all too common. We are here today in solidarity for justice for Trayvon Martin, but this isn’t an isolated incident. This has been happening for hundreds of years. There are thousands of Trayvon Martins,” admitted the Metro State junior.

“Black men are accustomed to being treated as suspicious characters — driving, walking or standing while Black in public. This has to stop,” continued Marcus Harcus, a North Minneapolis community organizer. He told the crowd, “I, too have been accused of being a suspicious character. I [don’t] have a criminal record.”

Local rapper Brother Ali told the audience, “We find some way to blame the victim [f 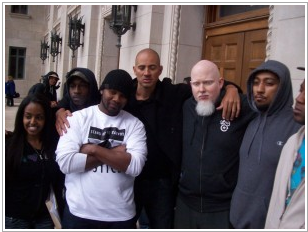 or] what happens to him, and let the killer off the hook.” He later told the MSR that some of his family members “are straight out racists, and other ones don’t consider themselves racist but they didn’t value Black people… I learned from the Black is Beautiful movement.”

“[Martin] wasn’t killed by a hooded sweatshirt. It was a gun,” said local attorney Jacob Frye, a member of Protest Minnesota. He said afterwards that he fed off the crowd’s energy. “When you got so many enthusiastic people out there…it gives you a little juice to speak your mind,” admitted Frye.

As she expressed her concern over “the plight of young African American males,” St. Thomas Law Professor Nekima Levy-Pounds told the crowd that her nine-year-old son shared the same first name as Martin but spelled differently. She explained afterwards that the Martin tragedy “speaks to a larger question of the value of Black life” in this country, and brought back bitter memories of when she lived in Los Angeles. “A classmate of mine’s was shot in the back of the head in 1991,” she remembered.

“Negative stereotypes” also are being used to justify Martin’s untimely death, believes Levy-Pounds, who added that if “a Black man shooting an unarmed White boy [had taken place instead], he would have been brought in [to police custody] so fast, our heads would…spin.” 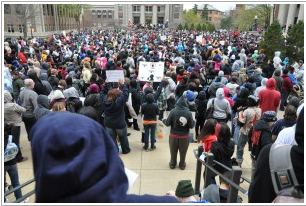 “Trayvon could’ve been me,” admitted U-M senior Sam Ndely. “I remember being a 17-year-old and thinking about going to college and my future. It’s unfortunate that he lost his life in this way.”

“I wanted to get across the Black image and how that isn’t a justification for the death of a young innocent Black man,” said Georgia native Sherese Taylor, a senior at the University of Minnesota. She noted that she also was surprised with the huge turnout. “Rarely at the university [do] you see Black faces as much… You see them walking past, but you rarely see them together as one, as a community.”

Before he spoke to the crowd, El-Kati told the MSR, “The relevant question isn’t whether or not [the alleged person who killed Martin] is Hispanic or White. He could’ve been Black and did the same thing because of the doctrine of White supremacy. We never have defeated White supremacy or sufficiently challenged it.”

“I think we have to take a serious look not only at our homes but also in our community,” surmised McKnight. “We have all these committees and all these different systems that make policies that make things like the murder of Trayvon Martin possible. We got to be in the habit of getting involved on the policy end of it.”

“This is a new chapter and a new beginning,” believes Muhammad. “Nobody wants to stay where we have been; we want to move toward a better future.”

“Most of all, we got to know as a people that this is a serious time for us to wake up and take care of ourselves at all levels and every way imaginable,” McKnight said.