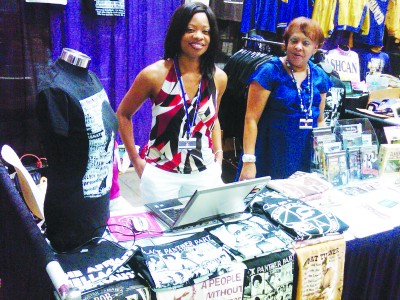 The aim of the expo is to teach cultural awareness and to inspire everyone, while sharing the often forgotten and untold stories about Black history around the world. The keynote speaker for the event is nationally known Dr. Julianne Malveaux, who is an economist, author, and the 15th president of the historically Black Bennett College for Women.

Dr. Malveaux’s speech will center on the historical economic struggles of many African Americans and how events in history (from slavery to today) have affected it. She recently appeared in the CNN documentary Black in America.

Another highlight of the expo is the art competition. One adult and one youth artist will be awarded $1,000 and $500 respectively for a painting that’s inspired by Black history. As for entertainment, there will be singers like Lia Renee Dior, drummers, and drill teams such as LoveWorks Academy performing at the expo.

The expo will include a fashion show, presented by Jessica Grantham, featuring Black designers and retailers showcasing their clothing designs and accessories. For kids, there will be face painting and readings of children’s books with an emphasis on Black history.

Expo-goers will not only intersect with Black retailers, designers and artists, but also with African American authors such as Lance and Landen Sanders, Naima Richmond, Ann Pritchard and Trina Patterson who will sell, autograph, and read excerpts from their books. Plus, organizations and museums will have an opportunity to sell, display and inform people about their products and services.

More than 200 vendors and exhibitors, including Big Brothers, Big Sisters of the Greater Twin Cities, African American Family Services, Amicus, the Minnesota Coalition for the Homeless, and the Minnesota Literacy Council are expected to be on-hand for this year’s expo.

An African American Inventions and Inventors Exhibit will feature inventions such as the gas mask, golf tee, ice cream scoop, ink pen, instant potatoes, pencil sharpener, traffic signal, and Dasani drinking-water on display. Dr. Mahmoud El-Kati, and Dr. Tracine Asberry will also lead seminars on topics such as “Haiti, the Haitian Revolution, and its Importance” and “When and How Do I Teach My Child About Black History?” In addition, expo organizer Karla Spencer-George will speak on “Three Things you Must Know when Raising Black or Mixed-Race Children.”

There will be a Black History Documentary & Discussion Room, where documentaries Slavery by another Name, Black in Latin America, and America beyond the Color Line will be on view.

Since its inception in 1926, Americans have recognized Black History Month, which was first known as Negro History Week. Much of the credit should go to Dr. Carter G. Woodson for both the celebration of Black History Month and our study of Black history.

Woodson, born to parents who were former slaves, grew up in Kentucky and worked in the coal mines. After graduating from high school at the age of 20, he attended Harvard, where he earned his Ph.D. Having learned that many history books left out Black Americans, he did something about it.

In 1926, Woodson launched Negro History Week as an initiative to garner attention nationally to the contributions of Black people throughout American history. Woodson selected the second week of February for Negro History Week as it includes the birthdays of Abraham Lincoln and Frederick Douglass, two men who greatly influenced Black Americans.

For tickets and more information about the Midwest Black History Expo, go to www.BlackHistoryExpo.com, contact Karla Spencer-George at karla@LiberationGifts.com, or call 612-387-5124.