The Minnesota State Fair held a preview at the Mall of America Sunday and hundreds of fans showed up to see what’s new for fairgoers. And they weren’t disappointed.

Two dozen new foods,  six new thrill rides, a title of “Supreme Breeding Animal,” and performances by a fourth generation Charro are some of the latest attractions at this year’s Great Minnesota Get-Together.

Camel Meat on-a-stick will be offered during the middle four days of the Fair at the Safari Express, International Bazaar. Deep Fried Bologna on-a-stick can be had at Netterfield’s Food Court across from the Kidway.

Chicken Fried Bacon, located at Giggles Campfire Grill on the north end of the Fair, is a slab of bacon dipped in batter and then deep-fried like chicken fried steak. “It’s a Southern thing and it’s excellent,” said Brienna Schuette, Marketing and Communications Manager for the State Fair.

The popular Fudge Puppies on the outside of the Food Building will have two new flavors: Turtle Puppies and Caramel Apple Puppies. If you want a healthier choice, a new option is the Fresh Fruit Salsa and Tortilla Chips, made on-site at its location in Carousel Park on the east side of the Grandstand Ramp.

One of three new food vendors is the Safari Express which will be serving traditional East African Somali fare at the International Bazaar’s Midtown Global Market Kitchen (Aug. 30 to Sept. 2).

“The Windstorm Roller Coaster is an amusement sized coaster out of a real amusement park,” said Schuette. “It takes 11 semi trucks two-and-a-half weeks to set up. The Windstorm has 1,400 feet of track and a windy, high speed turn. I’ll definitely go on it, I love roller coasters.”

Rock-It is an extreme ride that resembles a swing on an A frame. The arm spins 360 degrees and your seat spins as well, Schuette explained. Not to be left out, the Kidway has two new rides: The Expo Gondola Ferris Wheel and Beetle Bobs, which is a bug-themed ride.

A new attraction this year is Charro Jerry Diaz. Diaz is a fourth generation Charro, who is continuing the traditions that originated with his great grandfather over 150 years ago. He dresses in traditional Mexican costume and is skilled in horsemanship, bull riding, horse and steer roping and trick roping. Diaz will perform at selected English and Western Horse Shows and Minnesota High School Rodeos.

The National FFA Organization is having a new competition this year, “Supreme Breeding Animal,” in which a title is awarded to livestock considered the best of the best in each judging class.

A new game sponsored by the State Fair Foundation invites fairgoers to play Find Your Fabulous Fair Alphabet game. Designed by Minnesota author and illustrator Debra Frasier, families collect words they see, read, hear, feel or taste at the fair. Players who complete a game card with words from the fair win a blue ribbon from the Fabulous Fair Alphabet Booth in Baldwin Park. Game cards are available at www.debrafrasier.com

The State Fair Sneak Peek is in its second year and is coordinated and hosted by the State Fair Advisory Team, a group of students ages 16 to 21 who are the voice for their age group and advise the fair on trends, said Schuette.

Advisory Team member Vallari Ajgaonkar, 18, has the title of Director of Operations.  Advisory participants plan events such as Mall of America’s “sneak peek” and attend various parades around town handing out flyers advertising the State Fair, she said. Team members live all over the State and some drive six hours to get to their monthly meetings. “It’s our passion to help our generation transition from the Kidway.”

The State Fair broke attendance records in 2009 with 1.79 million visitors. “I have a good feeling about the State Fair this year,” said Schuette.

Schuette feels perfect weather conditions last year helped bring in the record crowds. “The weather was fantastic for all 12 days.  Some people said it was the best weather in 30 years of the Fair.”

The economic slow-down didn’t seem to be a factor in keeping people away last year. “The Fair is a tradition for people and something you always come back to. When times are uncertain, that feels good,” said Schuette.

Deep Fried Breakfast Wrap (scrambled eggs and bacon in a soft shell wrap deep-fried and smothered in cheese sauce). Outside the Food Building 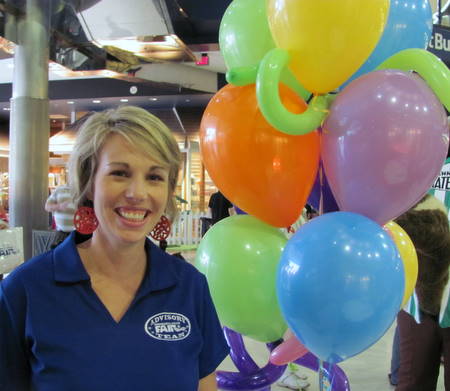 (Above) Brienna Schuette, Marketing & Communications Manager for the State Fair, helped at a “sneak peek” at Mall of America Sunday. “It gets people excited for the Fair,” she said. (Photos by Barb Teed) 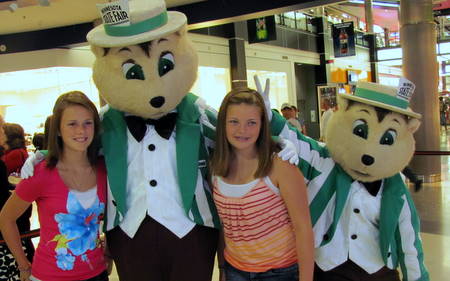 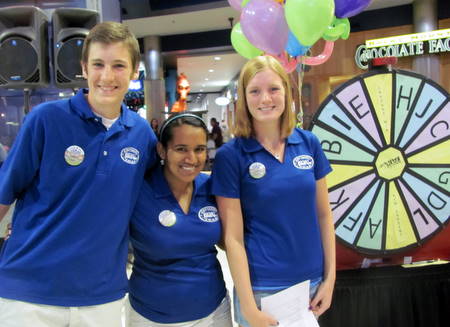 (Above) State Fair Advisory Team members Ryan Bruns, left, Vallari Ajgaonkar, and Rachel Bradac pause at a State Fair trivia game at the “sneak peek” event at the Mall of America. The Advisory Team coordinates the entire preview with help from Fair administrators. The Team is a group of 16 to 21 year-olds that give advice to staff on how to get their generation to the Fair.