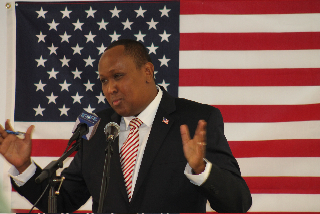 Somali-Americans assembled November 24 for a profound and, sometimes emotional, discussion in Minneapolis that sought ways to rebuild their war-torn homeland.

The two-and-a-half-hour “What’s Next for Somalia” forum drew nearly a hundred community members to Hiawatha Business Center. It was quite different and even more intense than many previous formal and informal talks the community has held.

African Development Center Executive Director Hussein Samatar, who organized and moderated the discussion, challenged the participants by asking them what they’ve done for Somalia, rather than listening to them repeat what has already been said about the 22-year-old Somali conflicts. He also encouraged people, as he moderated the discussion, to take actions — even if it means sending letters to the new African Union-backed Somali government.

“Did you write a letter to the president about your concerns?” Samatar asked a speaker who criticized President Hassan Sheikh Mohamud’s administration of corruption and incompetence.

“What have you done to address your concerns about the government?” Samatar asked.

“Instead of just talking about the issues of the country, let’s do something about it,” Samatar told the audience. “Pick a region in the country, for example, and do what you can to make a difference in the social causes in that particular area.”

Samatar said he’s helping build a hospital in Garowe, a fast growing city and the administrative capital of the semi-autonomous state of Puntland, which is a relatively peaceful region in northeastern Somalia.

“I picked a hospital that needs help,” he said. “That will be my project in the next four years.”

At a time when many Somali-Americans return home to participate in politics, Samatar said many in the community have asked him if he was interested in going back to play a role in the country’s politics.

He might run for mayor of Minneapolis after R. T. Rybak, though, Samatar added — a remark he has made on many occasions at community meetings.

The event featured Rochester-based Mohamoud Hamud, Islamic religious counselor at Mayo Clinic who was recently considered for the post of Somalia prime minister.

Hamud, 58, wasn’t picked for the job — he lost in October to economist Abdi Farah Shirdon, who ran a business in neighboring Kenya, according to a CNN news story. So he’s recently come back to the United States, where he has lived since 1974.

He told the audience about Somalia’s latest chaotic conditions, including the constant fear people in the country face as the al-Qaeda-linked al-Shabaab remnants blend into the populace to carry out terrorism attacks.

“They could be sitting with you in public areas, and you can’t tell,” Hamud said of the militant group members, who were defeated and ousted in late September from their last stronghold, Kismayo, by the African Union Mission of Somalia forces, well-known as AMISOM. “They blow off and shoot people anytime. Security is really bad in the country.”

“There is only one ‘safe’ road in the entire capital Mogadishu,” he added. “That’s the major road Maka al-Mukarama,” which is often used by government officials on their way to and from the parliament building.

While the lack of security poses a danger, Hamud said “the biggest problem” the country faces is the absence of formal institutions.

“The institutions, which used to have a system of checks and balances, were replaced by NGOs [non-governmental organizations],” he said. “The NGOs can’t be held accountable, because they don’t have board of directors.” One man might run an organization without accountability and transparency.

The country is in a big mess, Hamud said, encouraging Somali-Americans to give the new government a chance to rebuild the country.

The government was sworn in August at a Mogadishu airport base under the protection of the African Union, replacing a weak transitional government.

Participants of the forum unanimously agreed to support the president, prime minister and the members of the parliament, which is Somalia’s first formal government in more than 20 years.

It was also agreed that the Somali diaspora assist the displaced, internally and externally, by giving money to improve social issues including education, housing, health and infrastructure throughout the country.

“We are committed to advocate on behalf of Somalia in the United States and petition to our government to generously work with Somalia’s new leadership and not undermine their authority while supporting all of the regional local governments,” Samatar said.

A report from the forum will be sent to the federal Somali government and all of the regional governments operating in the country, Samatar added.

Some of the participants expressed happiness at the outcome of the forum and said they’d like to see more similar discussions in the future.

“The community has been divided in many aspects of the country,” community member Asli Salah said. “But I’m glad to see the community unite tonight for a better Somalia.”