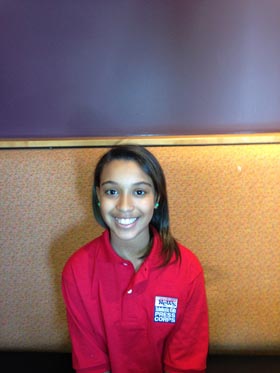 A love for music and an inquisitive mind have landed 11-year-old Aaliyah Kellogg opportunities of a lifetime and a chance to report for Scholastic News Kids Press Corps. The daughter of Mint Condition lead singer, Stokley Williams, and Sylvia Williams (owner and creator of Sweet Sylvia), Kellogg has been exposed to celebrities and musicians at an early age.

Kellogg said she always had an interest in journalism, but it wasn’t fostered until she met Michelle Williams (formally of Destiny’s Child).

“I’ve always been a curious person and like to ask questions,” said Kellogg.

It was through Kellogg’s godmother that she and her mother found out about Scholastic News Press for Kids Corps. Her godmother took interest when she saw that kids had the opportunity to interview the president of the United States. It was then that Kellogg sent in an application that featured an article Kellogg did on a documentary about Twin Cities musicians.

The documentary, “Funkytown,” set to air in Europe in January, features Desdamona, Peter Schimke, Cynthia Johnson, BoomBox, Eric Leeds, and Mint Condition. Kellogg wanted to cover this story because it featured her father and highlighted the talents of the Twin Cities. From this experience Kellogg said she, “learned to communicate better, write better and learned about my surroundings.”

“Her application was pretty strong,” said Ciampaglia. He said that with her article Kellogg was able to showcase what makes her community special, which is one of the reasons the organization chooses kids from all over the country. “She was also very poised.” 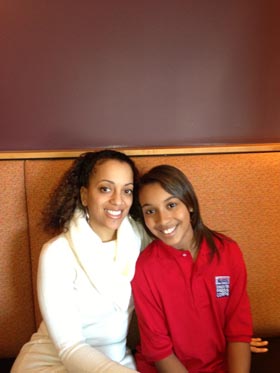 This is “news for kids by kids,” said Ciampaglia. “It covers and brings things to kids in a way that’s understandable. Kids also get the chance to develop and propose story ideas.”

When Kellogg is not reporting for Scholastic, she is posting interviews on her blog, “Li Simone Media.” At her age she has already had the chance to interview the likes of Eric Roberson, Kelly Price, Questlove of the Roots, Terri Ellis of EnVogue and Meshell Ndegeocello. Her interviews are done via Skype and each post features videos of the interviewed artist.

Besides interviewing musicians, Kellogg interviewed a veterinarian who donated money to Hurricane Sandy relief for animal shelters. Of her stories, Kellogg said this was her favorite.

In the future she hopes to interview the first daughters, Sasha and Malia Obama. Up next she will be doing a story on an upcoming show at Imagination Theatre featuring her little brother and which is under the music direction of her father.