The performance began with the announcement besieging the audience “To preserve the decorum of the Minnesota Symphony Orchestra, please turn off your damn phones!”  This was the first indication that, although the audience was still representative of the traditional patron of the arts (older and stodgier), informality was the new black.  The evening was a celebration of the music of Hollywood and was very well played.  The juxtaposition of an immense screen situated above the orchestra playing favorite scenes from Oscar winning films was another indication that this was a special event at Orchestra Hall.

The guests were greeted in the west entrance by a big screen playing old favorites of Laurel and Hardy with a live accompanist brining them back to the era of silent film.  The lobby was filled with the sites and sounds of the theater.  There were popcorn carts and vendors hocking cotton candy and theater sized boxes of Dots.  From time to time the conflicting fragrances of Chanel #5 and caramel corn was a bit much for the senses but overall the effect was pleasant.  With a 15 foot replica of Oscar tucked in the corner by the beautiful onyx bar, attention to detail was not spared.  One of the highlights of the evening was the use of a trivia game relating little known facts about the films highlighted in the concert, shown on the big screen before the show and during intermission.  The shows included Ben Hur, Citizen Kane, An American in Paris, Gone With the Wind, The Adventures of Robin Hood and none other than The Wizard of Oz.  Whether intended or not, this was a show that was sure to please the GLBT community (especially gay men)!

Between Robin Hood’s merry men in tights and Ben Hur’s beefcake was a healthy dose of grit with Scarlet O’Hara delivering her infamous line of “As God is my witness, I will never go hungry again”!  Perhaps the best of all was the inclusion of The Scarecrow Dance from the Wizard of Oz had been left on the cutting room floor in post-production. 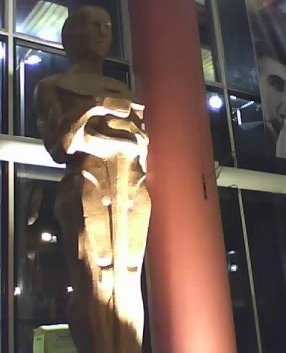 But the producer of this show, John Goberman, found the footage and the orchestra played the original score while we were treated to this rare piece of lost celluloid.  The talents of both Mr. Goberman and the conductor Osmo Vanska were put to great task with this multimedia extravaganza.

The Minnesota Orchestra will be showcasing concerts highlighting the music of classic Hollywood films through January 17, 2010.  The lobby also boasts a Judy Garland Museum display running through January 31, 2010.  For an added treat consider attending the Costume contest being held on January 16, 2010 at 7 PM in the Orchestra Hall Lobby.  Their website states “Lions and tigers and bears oh my! Come dressed as your favorite Wizard of Oz character and compete to win great prizes – presented by Cities 97 with host Brian Oake”.  Further information and a complete listing of events at minnesotaorchestra.org.