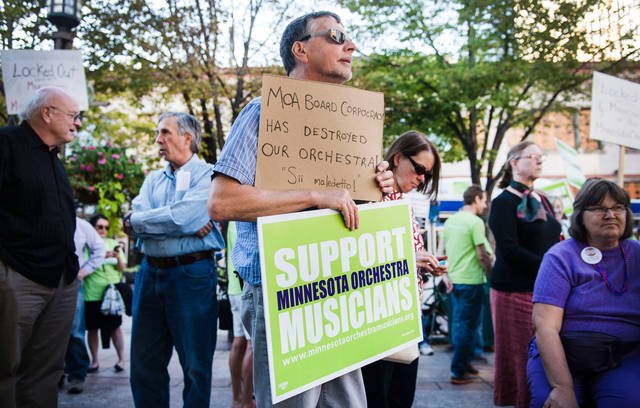 Kurt Rusterholz holds signs in support of Minnesota Orchestra musicians and against the lockout on Tuesday evening outside Orchestra Hall downtown Minneapolis. (Photo by Bridget Bennett)

Failed negotiations over the weekend forced orchestra management to cancel performances at Carnegie Hall, which Vänskä said last spring would drive him to resignation. A rally outside Orchestra Hall on Tuesday condemned the continued lockout.

The University of Minnesota’s School of Music has partnered with the Minnesota Orchestra and the St. Paul Chamber Orchestra, whose musicians have rehearsed and worked with students. The SPCO ended its lockout in April.

“It’s been pretty depressing,” he said.

More than 100 people gathered at the rally to support the musicians and hear from Minneapolis mayoral candidate and Councilwoman Betsy Hodges.

Since Oct. 1, 2012, the stage at Orchestra Hall has been silent as union musicians and management continue to negotiate salaries unsuccessfully.

Violin professor Sally O’Reilly said she’s been asked about the orchestra when she’s traveled to Europe several times in the past year.

The Minnesota Orchestral Association, which manages the orchestra, proposed significant cuts in musicians’ salaries after three years of money troubles and an expected endowment loss in the next five years, according to a Monday press release from the orchestra.

Over the weekend, musicians rejected the most recent proposal of an average 17.7 percent pay cut over three years and a $20,000 signing bonus, the release said. Musicians countered with reductions of less than half that.

“It is clear that this was less a good-faith negotiating effort and more an attempt to blunt criticism over the musicians’ inability to come forth with a substantial solution to our financial challenges,” Board Chair Jon Campbell said in the release.

After discussing the management’s proposal this weekend, Eggen said musicians voted and unanimously rejected it. He said he thinks the community is willing to make up the difference in funding.

Rebecca Jackson, a School of Music alumna, said the lockout makes her and other musicians nervous as they audition for major orchestras, because they now have less job security.

With no agreement, orchestra management canceled performances planned for Carnegie Hall in November.

“It is a very sad day for me,” Vänskä said in a release announcing his resignation.

Vänskä moved from Finland to the Twin Cities about a decade ago to take the position, the release said.

“At that time I made clear my belief that the Minnesota Orchestra could become one of the very greatest international ensembles,” he said in the release. “I have had the privilege of seeing that belief vindicated.”

Clarinetist Timothy Zavadil said the relationship between the musicians and Vänskä was “incredibly rare.”

“It was just great chemistry,” he said.

It was devastating, Zavadil said, for Vänskä’s resignation to come on the one-year anniversary of the lockout.

To try and get back to work, Zavadil said, the locked-out musicians will be putting on a concert this weekend at the University’s Ted Mann Concert Hall.

Principal cellist Tony Ross, who spoke at the rally, said the orchestra will close the show with Igor Stravinsky’s ballet “The Firebird,” which is about “rising from the ashes.”

“We are anxious to get back on stage and perform for the community,” Zavadil said