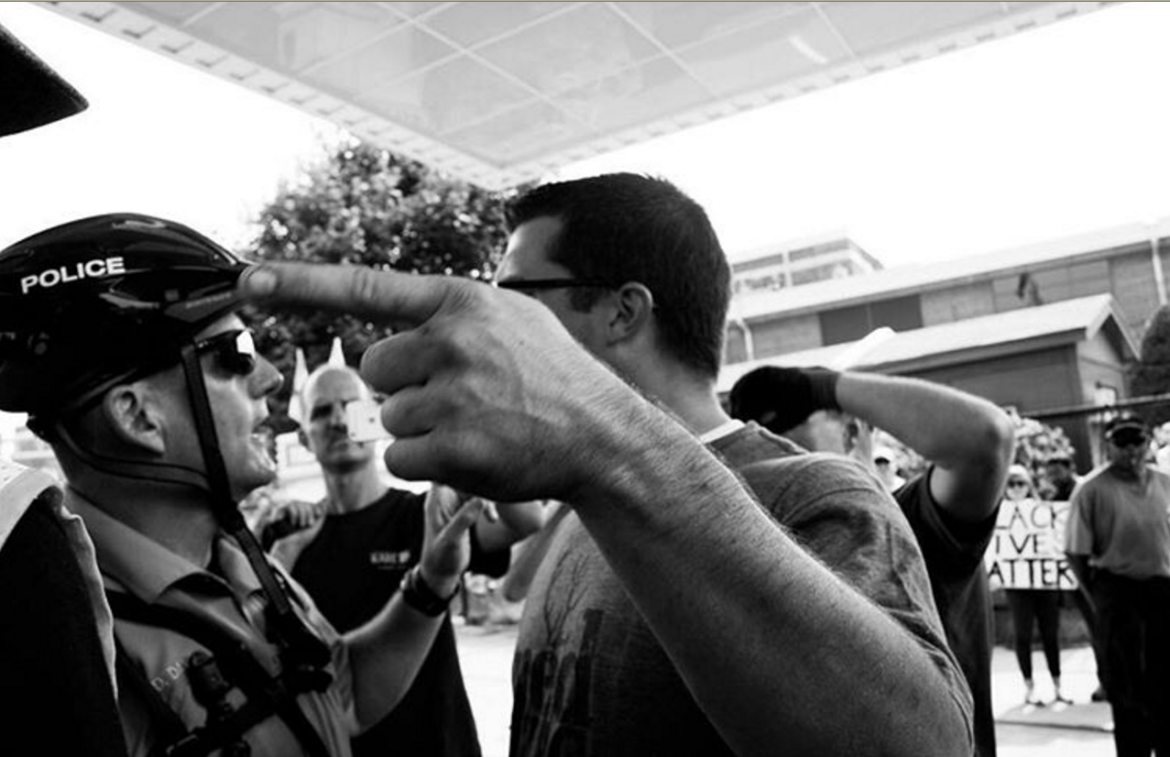 An angry state fair goer upset about the protest, confronts a police officer and says "Why aren't you doing your job?!" The officer does his best to de-escalate the situation. Take note in this photo of the privilege he has as he is face to face with a cop. If a black person did this, what would happen?

As much as Minnesotans love to think they’re special – and there’s something to be said when Fast Company recognizes the residents as being the third “happiest” in all of the United States – there’s one way they’re positively common: racism. In October, Huffington Post reported that Minneapolis-St. Paul is the third worst city for Black people, and publications like The Atlantic and Washington Post have been asking why such a progressive state is so regressive when it comes to racial disparity.

Minnesota Nice is the transplants’ nice way of calling born-and-reared-here Minnesotans passive-aggressive. For those of us who’ve lived in other places, such indirectness is baffling at best, and emotionally abusive at worst. Unlike what the Star Tribune and City Pages offer in their analyses about “overcoming Minnesota Nice,” the problem is deeper than a state full of polite, but shallow, conversationalists. This isn’t about Indigenous people and people of color (POCs) simply needing to be more assertive in shaking hands with and smiling more often at white people – in other words, being nice to them. The interpersonal “remedies” offered by the mainstream press and its “alternative” subsidiary flippantly dismiss the realities of how racial inequity operates here and squarely puts the burden on Indigenous people and POCs to correct it in order to make white people more comfortable and not challenge – if not outright dismantle – the particular “friendly” construction of Minnesota’s racism. In other words, this state’s niceness isn’t nice at all.

The most common way this plays out in race relations is in what social justice thinkers and psychologists call microaggressions. As psychologist Derald Wing Sue notes particularly with racial microaggressions, they’re the “everyday insults, indignities and demeaning messages sent to people of color by well-intentioned white people who are unaware of the hidden messages being sent to them.”

These are some of the microaggressions I’ve experienced since arriving in the Twin Cities in late June: 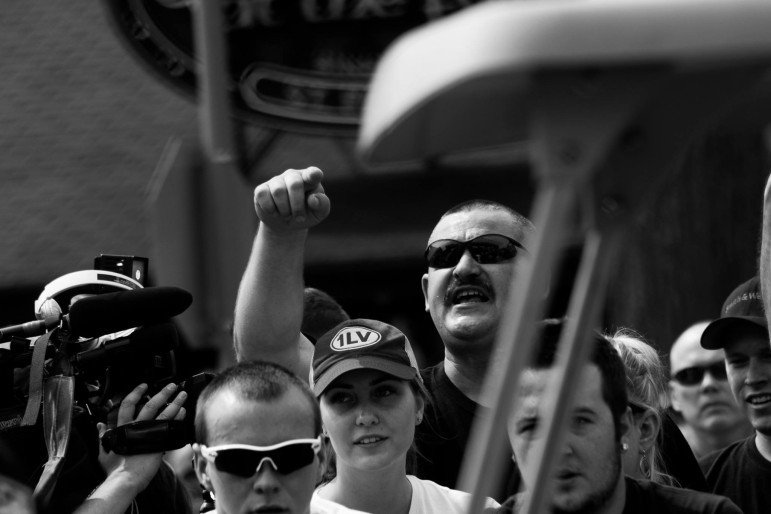 The reality is too many white non-conservatives – be they by presumption of politics, person, partners or profession, both here and in the greater nation – view themselves as inherently “not racist.” The caregiver implied as such in her microaggressive anti-Indigenous comments yet wanted to convince me they were OK because she had POCs in her family. They think they are redeemed by  “good intentions,” and also because they frame racism as individualistic, overtly hostile or violent and removed from themselves by location or age. A racist by this framework can only be a Klansman living far from the venerated Upper Midwest tor Grandpa Eugene bringing his racist views to Thanksgiving dinner. Grandpa Eugene and the Ku Klux Klan counter the seemingly self-effacing social performance that is Minnesota’s character because they’re directly and openly showing their racism. Microaggressions, on the other hand, allow for plausible deniability, which fits perfectly with the passive-aggressiveness that is Minnesota Nice.

Minnesota’s racism is colored by the Law of Jante, the Scandinavian social ethos as fictionalized in Aksel Sandemose’s “A Fugitive Crosses His Tracks,” that took over this area and contains what we recognize as Minnesota Nice.

With the eleventh, more putative, principle:

Where Minnesota Nice crystallizes into Minnesota racism is when, for example, white people indirectly expressing their vitriol on social media about Black Lives Matter-St. Paul (BLM-SP) conducting civil actions at locally cherished events such as the State Fair or the St. Paul Marathon — events that are part of the Minnesota Nice identity. According to racism in America, people of color should not protest our oppressed conditions out of a combined sense of not being smart enough to understand our oppression – how it works and who’s responsible – and gratitude for being allowed to exist on this soil. This fits neatly into the Jante principles of not thinking one or one’s people as more important or that anyone cares about either one. Just who do BLM-SP marchers think they are to confront our niceness with constitutional rights?

On the microaggression level, this idea manifests in ways like when the caregiver called me an “uppity feminist” and the white male not-quite supervisor asking me how I “knew so much” on my first day on the job.  As if I had broken the tenet, “You’re not to think you know more than we do.”

Minnesota Nice also protects the state’s racism with the eye-rolling indignation when called out for saying or doing something racist, be it a person or a policy. In contemporary American racism, it’s worse for a white person to be called out on their casual racism than the actual racist comment or action. For the white person, being called out means the discomfort of judgment, of being seen as less than the inherently “good” person that white privilege promises. But that judgment goes deeper: it not only means that the white person is not only figured out – and by a person of color, who is not supposed to be smart enough to figure out racism, let alone when it’s directed at them – but also that the white person is held up as pathetic and worthy of dismissal, if not ridicule. That’s why my neighbor flipped out when he was confronted for his comment about turning the fire hoses on the BLM-SP marchers at the State Fair. The Law of Jante has a tenet for that, too: You’re not to laugh at us.

But what very few people say directly is that the Law of Jante and its American child, Minnesota Nice, produces an abiding mediocrity. The social ethos dampens individual achievement – or, as mentioned earlier in the piece, any showy individualism – because it’s met with passive-aggressive hostility. The hostility enforces an amiable middling that comes out in Minnesota’s race relations, too. It allows, for example, the Minnesota Historical Center to acknowledge the four-decades-old Hmong community with a bargain-basement priced exhibit – and that only came about because that community pressured the center to recognize their existence and influence. Or it’s that same center reducing the Rondo community’s deep and extensive history to a corner display in a room with a hodge-podge of exhibits about Indigenous people, POCs and poor whites. Or the University of Minnesota dismantling a program and department that help people of color aim for academic excellence and enjoy a fuller college experience. All of these are examples of the “soft bigotry of low expectations,” or, as the Law of Jante would say, “You’re not to think you are as good as we are.” Institutions in this state feel they only need to do the barest minimum to recognize and accommodate communities of color and that minimum should be good enough for the them, at least good enough to shut them up and keep them on standby to show off Minnesota’s “diversity.” 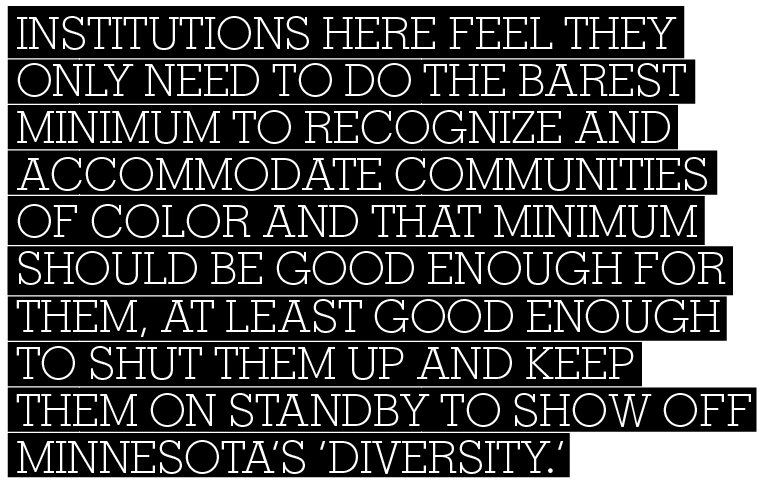 Maybe it’s just me, but the right response to the Atlantic and Washington Post busting Minnesotans the white lie of progressivism isn’t solved by writing cheery how-to guides for “outsiders,” or bright-sided admonishments to long-term locals to be socially open to newer residents, or decrying people of color exercising their constitutional rights to publicly demand racial equity. When the Twin Cities show up on Top 10 lists for achievement gaps and racial disparities, how will that statewide passive-aggression help affect positive change? That’s something you just can’t “nice” away. 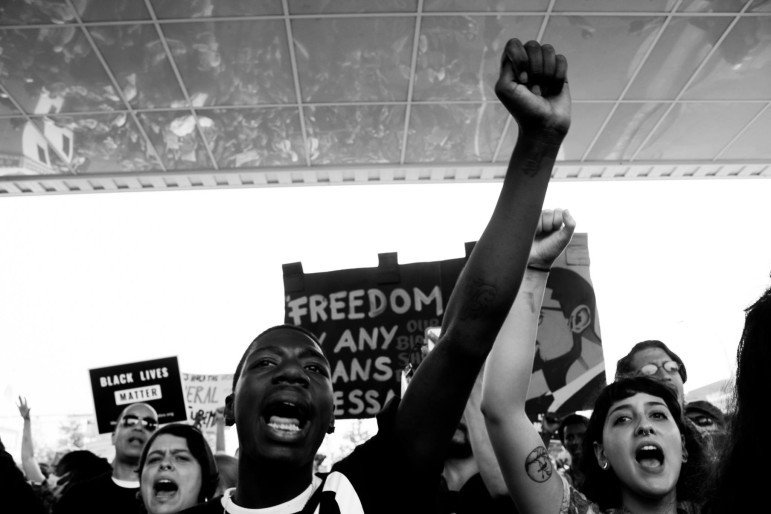 Arts + Culture
Andrea Plaid
Do NOT follow this link or you will be banned from the site!
X