The Minnesota Broadband Task Force 2012 Annual Report and Broadband Plan was released Tuesday afternoon. Folks have been asking me about what I think about it. So while my opinion is just that and isn’t worth anything more than that – I have attended a lot of these meetings over the years so I’ve been able to see the hours of good work that’s gone into the efforts to bring better broadband to Minnesota. I’d encourage others to voice their opinions too. You could send notes to Connect Minnesota or the Department of Commerce. Or post them here and I’ll do what I can to make sure Task Force gets your notes. I think comments would be welcome as the Task Force plans to focus on specific issues in 2013.

I was disheartened a couple of weeks ago to see that Minnesota is “average” in its broadband efforts (according to a recent TechNet report). I think as a state we need to step it up if we really do want to be a national and world leader in broadband. I’m glad that the Task Force report made the point too – very clearly on page one in Margaret Anderson Kelliher’s introductory letter when she says…

While the Task Force is encouraged to report that progress is being made toward the state’s broadband goals, we are not on track to meet them by 2015.

I think the most effective Task Force recommendation is the formation of an ongoing entity to drive state broadband efforts. The TechNet report (in which MN comes in 19th for broadband leadership) indicates that Governor interest and institutionalized planning efforts often predict broadband success. Community broadband activists have often noted that local champions make or break an effort to expand broadband. Why should that be different at the state level? We need local champions that are deputized to led the charge. While the various iterations of the Task Forces in Minnesota have been dedicated to the cause – it’s not the same as having full-time, paid staff who are dedicated to the effort.

The National Conference of State Legislatures maintains a list of statewide broadband committees and entities. They describe the list…

All 50 states have created either a task force, commission, or broadband project. Some states have created programs to identify underserved and unserved areas through online public mapping websites, while others have established task forces or commissions to provide input on the development of a statewide broadband framework and promote public-private sector participation. At least 14 states have enacted these initiatives and authorities through legislation.

Perusing the list there are lots of states with programs supported through stimulus funding such as Connected Nation states and states that focus on mapping. There are a number of Task Forces similar to Minnesota and most of those (and the ARRA funded groups) seem to be slated to sunset in the next couple of years. There are also a handful of states with programs that seem to have a deeper commitment – the commitment I’d like to see Minnesota make. There were two programs that stood out: Maine and Massachusetts (MA ranked #2 in the TechNet report)…

Maine ConnectMe Authority
The Maine ConnectME Authority (35 M.R.S. §9201) was created by the legislature with the goal of expanding broadband access in the most rural, unserved areas of the state that have little prospect of service from a traditional provider. The authority’s purpose is to identify unserved areas of the state; develop proposals for broadband expansion projects, demonstration projects and other initiatives; and administer the process for selecting specific broadband projects and providing funding, resources, and incentives. The authority is funded by a 0.25 percent surcharge on instate retail communications services and funds proposals through grants, direct investments, or loans made on behalf of, in partnership with, or in support of, one or more communications service providers.

There is room for Minnesota to be a leader! 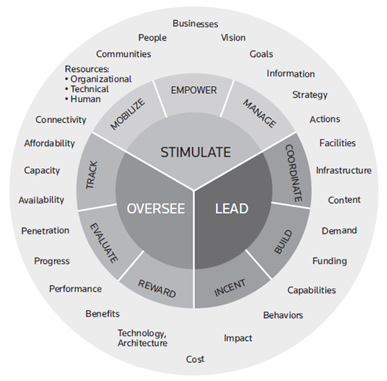 Like the current Task Force, the original Task Force suggested an ongoing broadband entity in their 2010 report.

The original Task Force also created a pretty clear roadmap for such an entity. At a very high level the marching orders were to lead, stimulate and oversee statewide efforts – but I think the value lives in the detail provided. It is a work plan that would require little fleshing out. It might make sense to modify certain recommendations. The original Task Force report was published before the National Broadband Plan so there may be new/different efforts to add to the roadmap. But easier to modify an existing document that start anew.

I know there were a couple of items on the current Task Force recommendation list that would be easier to accomplish if an ongoing entity existed, specifically an ongoing group could help create a Minnesota fiber database and spearhead a proposal on dig once. (Staff time has been suggested – it might be nice to house these folks in the same place to help awareness and cohesion for the entity.

An ongoing entity could help the broadband initiative work with other state initiatives. It seems as if Governor Dayton is focused on goals over departments so I think having someone who is able to take the time to learn about when and how other departments would benefit from (or expect) broadband would help create a cross-departmental coalition to support broadband, which might lead to funding, which I think will be key to reaching the far corners of the state. (For example I know the Governor’s Health Care Reform Task Force includes “invest in high-need infrastructure for telehealth and workforce services” as part of their Roadmap to Healthier Minnesota. It would be nice to build upon that sentiment.) Working with other departments or sectors helps broadband emerge as a solution – and often a solution that saves money – rather than an issue.

At their last meeting, the current Task Force outlined the a number of incentives to encourage broadband deployment that have now become official recommendations (such as Tax credits for broadband providers to go to unserved areas and Sales tax credit for fiber/broadband equipment) and adoption (Scholarship dollars to students to tutor for broadband funding). I posted the notes on the Blandin on Broadband blog; two comments came back saying that the incentives were not enough.

The sales tax exemption on capital equipment is unlikely to spur capital investment. Assuming the worst cost example of $10,000 per house for FTTH and that the entire cost is capital equipment would mean a sales tax savings of around $700. That subsidy amount was just generally rejected by CenturyLink and Frontier for them to extend DSL to unserved areas (with much lower per – house costs) with services that would not meet the state broadband goal. CenturyLink did take some of these funds in Minnesota, but for targeted areas.

I agree with Bill’s comments regarding the tax credits-sales tax exemptions are nice but don’t spur investment and national companies have complex tax situations that rarely offer incentive from income tax credits in specific states. …

State sales tax on online sales will come eventually–Congress has it on the table now although it won’t get action until the new Congress takes over–and when it does, it seems to me that having revenue generated by broadband online activity would be a sensible place to find some funding. And if you want more federal funding, use those dollars to provide the match, like Illinois has done. (The Governor will have to be convinced, he’s already stated other uses for the revenue that are unrelated to our efforts.)

I think they make good points. Also in terms of incentives to adopt, Connected Nation has released a report indicating that in Minnesota non-adopters would consider getting broadband for $20 per month. That would require a subsidy of nearly $30 per month per adopter. Is the state interested in that sort of investment? I might make the case that commercial providers are recognizing their role of subsidizing residential connections through programs such as Connect2Compete and locally with programs such as reduced trial subscriptions described by Dick Sjoberg as a great marketing strategy in Thief River Falls.

Perhaps Minnesota isn’t in a position to subsidize adoption or deployment at this time – maybe the wisest investment is in supporting staff of an ongoing broadband entity to find federal funding, to encourage local collaboration such as dig once that reduces overall cost, to promote efforts that work (such as reduced subscription trials), and to act as a matchmaker between the other efforts (such as healthcare) that might have funding to support broadband deployment and adoption. After all Massachusetts invested $40 million to get to number two!