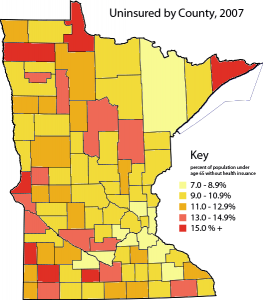 Recent rankings reports from different organizations paint a similar picture: Minnesota’s health system tends to rank among the best in the nation, while also demonstrating some signs of worry.

First, a Press Ganey Pulse Report finds that Minnesota ranks 5th among the 50 states in shortest visits to the Emergency Room in 2009, averaging 3 hours, 11 minutes per visit, a mere 16 minutes behind the leader (Iowa). Only Iowa, the Dakotas, and Nebraska ranked better. The national average is 4 hours, 7 minutes, with Utah bringing up the rear, with an average ER visit lasting 8 hours, 17 minutes in 2009. Shorter visits are correlated with high patient satisfaction; as it currently stands, shorter times are indicators of efficiency, not rushing. Both the length of Minnesota’s average ER visit and the national average have not changed much since 2008, though other individual states have seen significant improvements or declines.

Next up is a newly-released ranking from the Census Bureau on percent of those without health insurance under age 65 per state in 2007. Minnesota comes in 3rd at 9.6%, one of only four states under 10% (the others are Massachusetts, Hawaii, and Wisconsin). This compares to a U.S. average of 17.1%. The report is also useful in that it includes breakdowns by county (see map). For instance, Minnesota’s lowest uninsured population is in Anoka County, at 7.3%, while Cook County struggles the most, with 18% uninsured.

Now for the bad news: when these numbers are examined over time, our trend is worse than the nation’s. Based on numbers from America’s Health Rankings, Minnesota has seen a 21.1% increase in the size of its uninsured population since 2001, compared to a U.S. increase of 11.5%.  It’s also important to note that because Census data is only available up to 2007, before the Great Recession, the total uninsured percent of the U.S. population has likely increased in the last three years.

Finally, the Annie E. Casey Foundation’s annual Kids Count report ranks Minnesota 2nd in children’s well-being for the third year in a row, behind only New Hampshire. The ranking is based on statistics such as youth mortality rates, teen births, school attendance, and children in poverty. However, the Star Tribune reports that many Minnesota child advocates “fear Minnesota’s poverty rate – higher than a decade ago – could undermine its success.” These advocates worry that while our numbers remain strong in many categories, our increasing poverty is a leading indicator that these numbers could soon be declining.

The Tribune quotes research director for the Children’s Defense Fund-Minnesota Kara Arzamendia, who was speaking of the Kids Count results but whose comment is true of Minnesota’s health system as a whole: “Minnesota isn’t doing very well compared to itself.”

It’s become a common theme: In snapshot comparisons to the rest of the country, Minnesota’s health continues to hold up well. But compared with our proud past, in category after category, Minnesota has begun to slip. We’ll need to reverse that trend if we want to maintain our high quality of health and remain the national leader we are today.