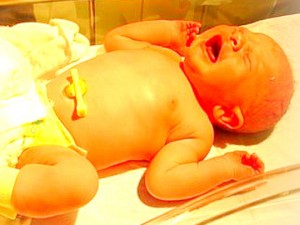 A proposal to ban circumcision will be on the San Francisco ballot this November.

As a Jewish Mama, my response should fall somewhere along the lines of outrage and a head-tisk.

And as a bleeding heart Mama, my response should be somewhere in the range of agreement and an apology to my son.

I whole-heartdely feel all of these emotions. In other words, I’m conflicted.

I don’t agree with the circumcision ban. But you might be surprised why.

Let’s start with the Jewish Mama part of me. Circumcision is mandated in the Jewish religion.

So two years ago, when our son was born, Jason and I barely discussed whether or not he would be circumcised. We delved into the details of when, where, and by whom. But circumcising Brody was a given for us.

When I called various mohels, I was repeatedly told that this would be Brody’s one chance to perform this mitzvah and that Jason and I shouldn’t take it away from him.

And as far as we’re concerned, he’s legit. We didn’t follow every rule and regulation to a “T” (Really, when have we ever?), but Brody is circumcised.

Flipping over to look at the bleeding heart side of me, the arguments against circumcision are compelling.

The reasons start with medical proof that circumcising isn’t necessary for cleanliness and health purposes.

They continue by disproving the “everybody’s doing it” philosophy. As my friend Mary so eloquently puts it, our boys won’t be laughing at each other in the locker room; there’ll be variety in there.

And they go in for the win by comparing circumcision to female mutilation, calling anti-circumcision “advocating for our children,” and naming the movement “leaving my son whole.” These word choices certainly make me second guess myself.

What it really comes down to is this: I don’t regret circumcising Brody and I’m not 100% sure that I would do things differently if we were to have another baby (Which, for the record, we’re not.). What I am embarrassed by is that we barely thought about this decision.

We’re parenting in a different time and place. What has been done in the name of “that’s just the way it is”, doesn’t necessarily have to be a given. And it’s absolutely fabulous.

We’re conscious of our choices and can research the decisions that we make. And our children and families are better off for it.

We went to a birthday party this weekend. It was (finally) warm outside so the kids ran around barefoot. As a group of little boys rushed by, I overheard a mom commenting on one little guy’s painted nails.

That’s just so cute! She said.

He’s in his princess phase. Was his mother’s response.

That’s the norm today. Nothing needs to be taken for granted, assumed, or done just because it always has been.

So I don’t have a hard and fast rule for whether or not parents should circumcise their sons. What I do know is that it’s a decision that should be thoughtfully made.

And as for the circumcision ban? Well that just falls into the category of non-thinking decision making, doesn’t it?