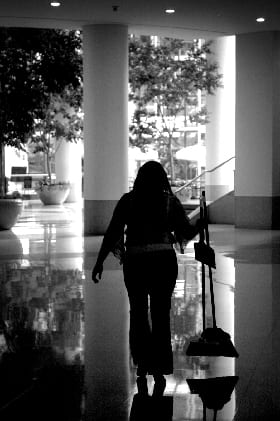 It sounds like the plot of an exaggerated movie. One whose events are so extreme, you say, “But that could never happen in real life!” Acute sexual harassment, forced sex. Immigrant women, alone, in isolated locations whose main contact with the company they work for are the very harassers that attack them night after night. They speak little English; but still, they follow policy. They report the harassment, only to have the company – a huge corporation with billions in revenues a year – do little or nothing to stop the harassment. But it is no movie. It is precisely what eight women are alleging happened.

In a class-action complaint filed in mid May with the United States District Court of Minnesota, eight Latina women contend that their employer, American Building Maintenance Industries or ABM Industries, Inc. systematically ignored their complaints of sexual harassment.

The complaint, obtained by La Prensa de Minnesota, states that ABM Industries has “adopted and maintained a system-wide pattern and practice of subjecting female janitors to sex harassment, discrimination, and retaliation,” and sets forth an astonishing array of complaints, from sexual assaults, to haphazard management response, to on-the-job retaliation.

According to their Web site, ABM provides janitorial, parking, engineering, security, lighting and mechanical services for thousands of commercial, industrial, institutional, and retail facilities in hundreds of cities across the United States and British Columbia, Canada. Its fiscal 2005 revenues totaled in excess of $2.5 billion and it has more than 73,000 employees, and more than 240 offices. ABM provides janitorial services to a large number of facilities in Minnesota, including the Minneapolis-St. Paul International Airport and many of the buildings visible in the Minneapolis and St. Paul skylines.

One woman’s story
One of the women named in the complaint agreed to speak to La Prensa de Minnesota on the condition of anonymity and tell her side of the story. We’ll call her Carmen. She has lived in Minnesota for eight years and is originally from Mexico.

When Carmen began working for ABM, she says she had no problems. She did her job well and had no issues with her co-workers or her supervisors. In fact, she says that she got along well with both her direct supervisor and her shift manager, who were brothers.

However, about a year into the job, in September of 2004, things began to change “drastically.” Her direct supervisor started to come on to her, saying “inappropriate” things and when she told him she was not interested, he laughed at her. Then, on three separate occasions, he touched her inappropriately, the last time, she says, “vulgarly, between my legs.”

Carmen was shocked, and despite the inherent difficulties in accusing someone’s brother of sexual harassment, she went to her shift manager. She had a meeting with both of them, where, she alleges; her direct supervisor laughed off her accusations and said, “That’s how I am with everyone.”

She says the shift manager told her to think of her brother’s family and took no disciplinary action. After that, she says that her direct supervisor created a very uncomfortable work environment, giving her hostile looks, checking over her work and giving her more work than before.

In April of 2005, she had another meeting with upper management, for which she brought her own translator, but again had a frustrating experience. Though she understood that her direct supervisor would be suspended for three days while the company investigated, he was at work the next day and every day thereafter. He never stopped working, still had access to her regularly (though she had asked to be moved to a different floor), and treated her in a very menacing manner.

Eventually, her direct supervisor was transferred to another building, but he still came around regularly. Carmen was given more work than ever and she says, “felt pressured to leave.”

She reported the harassment again in May of 2005 and stopped working in July of that same year. She says that while she worked there, she knew of another woman who had been subjected to sexual harassment, and even though the woman never reported it, she was fired.

Carmen says that the ordeal hurt her relationship with her husband and hurt her personally and emotionally, saying, “I just wanted to work in peace. What hurt me the most was that instead of trying to help it got worse. For me, after reporting it, it kept happening and in some ways got worse, it should have been the other way around.”

As far as Carmen knows, both her shift manager and her direct supervisor still work for ABM.

Attorney Jacqueline Mrachek, of Greene, Espel, LLP says, “ABM has a track record of taking prompt and appropriate action in response to allegations of sexual harassment, including with these plaintiffs. ABM’s policies and procedures are highly effective – well beyond what is required by the law. Those include, but are not limited to, posting and providing all employees policies in both English and Spanish, making available trained human resources staff and a bilingual third-party 1-800 number, and mandatory annual sexual harassment training for all supervisors. ABM actively encourages employees with any concerns to come forward, and thoroughly and fairly responds to complaints, up to and including termination of alleged perpetrators. In these specific cases, as soon as it was notified, ABM immediately investigated and took appropriate action.”

In her statement, Linda Auwers, General Counsel of ABM Industries says, ““We take very seriously the issues of equal opportunities for women and providing employees a tolerant and inclusive work environment in which they can fulfill their greatest potential. For many years, we have had strong policies and initiatives to maintain a tolerant and inclusive workplace. Those include zero tolerance for sexual harassment, as well as a track record of affirmative action hiring and promotion. The plaintiffs’ lawyers’ May 15 press release is misleading in several respects. The allegations against the company are without merit.”

On paper, but not in reality
Victor Carta is the current owner of Libreria La Paz in Minneapolis’ Mercado Central, but from 1997 to 2002, he worked for ABM as a supervisor.

He and his wife, Veronica Rosas, who also worked for ABM, do not recall witnessing any overt cases of sexual harassment, but Carta says that there was a general disregard on the part of some supervisors for company policy, including sexual harassment.

He says that during their monthly or bi-monthly training sessions, ABM went over sexual harassment policy, which he describes as “strict.” But reality, he says, was very different.

“Its there on paper, but not in reality,” he says. He says that it was common for male Latino supervisors to openly flirt with female employees, to ask them out to dinner and to treat them differently – sometimes preferentially, sometimes not – than their male co-workers.

“Its part of our culture, to ask your female employees out,” he says, “but not here.”

Carta recalls hearing of one girl who refused a supervisor and was fired, but did not have any direct experiences with sexual harassment cases.

Rosas says that some Latino supervisors took advantage of their fellow Latino workers, “because they felt they knew some English, they had some power, they thought they’re better,” and recalls supervisors letting their friends get off early from work, punching other people’s timecards and taking supplies.

Carta says that ABM would send out inspectors to the sites periodically, but says that if there were problems, many times people were afraid to talk, for fear of losing their jobs. He says that that is the same reason many female employees accepted the behavior of their male supervisors.

“ABM might be a good company,” says Carta, “But they have some bad supervisors and they don’t enforce their policy.”

The pending case
Currently, Carmen and the seven other plaintiffs are waiting for ABM’s response, which should be filed shortly, says Justin Cummins.

Cummins, of the law firm Miller-O’Brien, is one of the key attorneys in the case and anticipates a tough fight against ABM.

“In the current legal landscape it is difficult to bring these kinds of cases,” he says, but Cummins is determined because what he has heard from his clients, he says, is egregious.

He says that they were easy targets, “Working in isolated locations, often at night when no one is around,” and says it is particularly difficult to enforce sexual harassment policy when their primary contact with the company is the harasser.

“They were blown off by management,” he says. “The ways the company has responded has been to transfer supervisors or the women, it’s not much of a solution.”

“Bottom line, its callousness, not believing them – because they are immigrants, in low- skilled jobs, people of color, women,” he continues.

Six of the eight plaintiffs are still working at ABM, because, Cummins says, “many of these women’s very livelihoods, the livelihoods of their families, depend on them maintaining their jobs.”

As far as Cummins knows most – if not all – of the men who harassed his clients continue to work with ABM.

Cummins is conducting an investigation, which has brought to light more cases, but many of the women are afraid to come forward, he says, because they fear reprisals.

Ultimately, he says it is about patterns of abuse, and of the abuse of particularly vulnerable workers. He says he hopes that this case inspires other women to step forward and report harassment and abuse in the workplace and gain support from each other, not just at ABM, but everywhere. As Carmen says about the case, “it has helped to know I’m not the only one.”