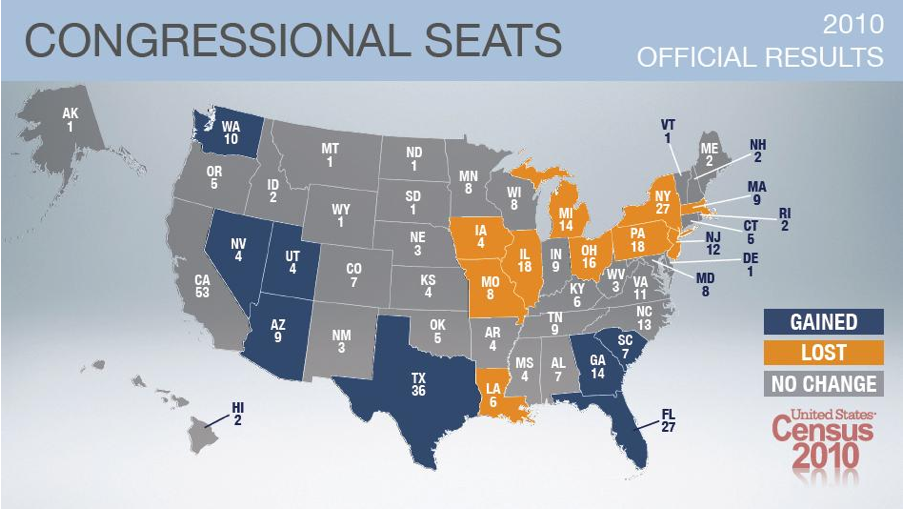 Minnesota will keep all eight seats in the U.S. House of Representatives, squeaking by with an increase in population to 5,303,925 in the 2010 Census, according to census figures released December 21. Both Iowa and Missouri were among the states losing seats.

U.S. congressional seats are reapportioned every ten years, based on population figures from the census. Minnesota has had eight representatives since the 1960 reapportionment. The map below shows the winners and losers in the 2000 census. Click on the map to go to the Census page, where the interactive map shows years, population by state, and congressional numbers all the way back to 1910.

In 1910, Minnesota’s congressional delegatoin increased from nine to its all-time high of ten. The number went back to nine in 1930 and then to eight in 1960. While Minnesota’s population increased from 2000 to 2010, the biggest growth in the country continues in the south and west.

Within Minnesota, redistricting starts in the legislature, where both houses are now controlled by Republicans. They will pass a redistricting plan and send it to Governor Mark Dayton. He can sign or veto the plan. If the goernor and legislature are unable to agree, redistricting can end up in the courts.

In addition to redrawing congressional district boundaries, the legislature also needs to redraw its own district boundaries, based on new census data. According to a presentation by Minnesota State Demographer Tom Gillaspy in October, districts 2 (Kline) and 6 (Bachmann) have too many people, and districts 1 (Walz), 4 (McCollum), 5 (Ellison), and 7 (Peterson) have too few, based on 2009 figures.

The U.S. Census Bureau created a video to explain reapportionment (above.) Apportionment is the process of dividing the seats in the House of Representatives among the 50 states based on the population figures collected during the decennial census. The number of seats in the House has grown with the country. Congress sets the number in law and increased the number to 435 in 1913. The Constitution set the number of representatives at 65 from 1787 until the first Census of 1790, when the it was increased to 105 members.