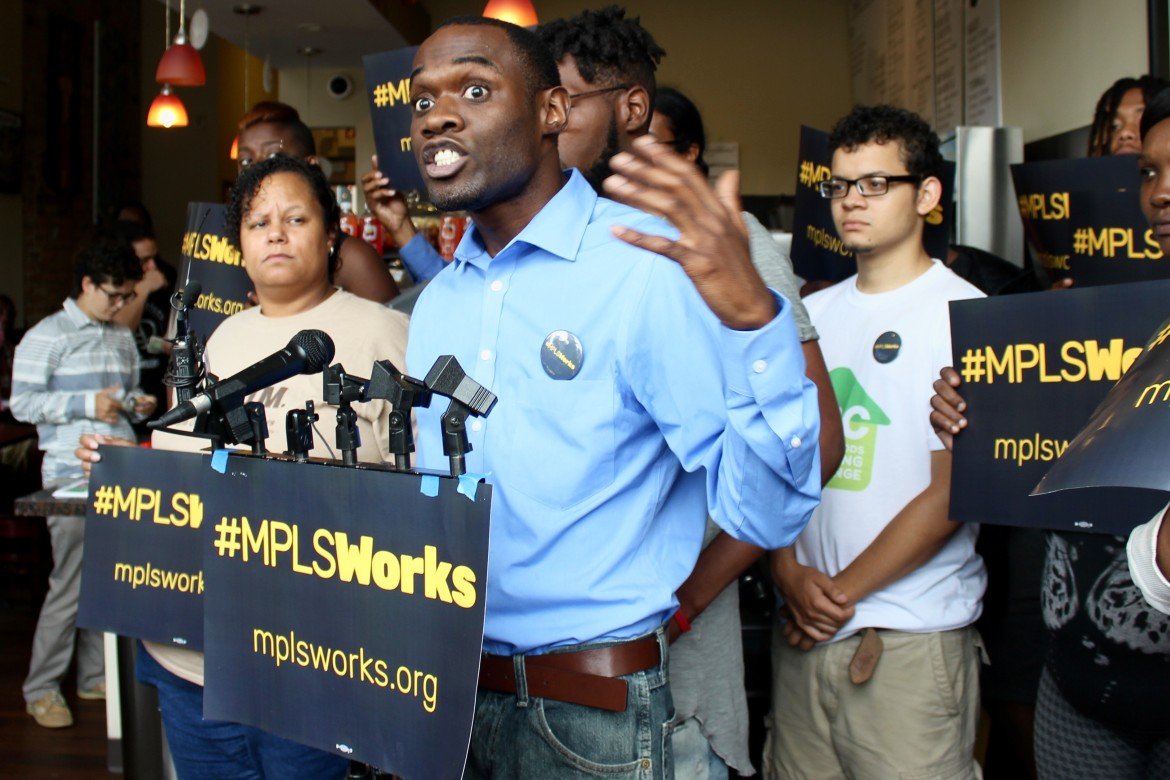 Although it was mainly a plot to cool out radical activism, Labor Day is widely remembered as a celebration of the successful fight for the eight-hour day. Yet, while we’re approaching the United States’ 121st official Labor Day, it is now impossible for low-wage Minnesota workers to support their families while working only eight hours a day.

Anthony Shields, a young community organizer with the workers rights campaign at Neighborhoods Organizing for Change (NOC), remembers the struggles his single mother faced working two full time jobs. “I would only see my mother for five hours a day, and between those five hours, she was exhausted and trying to get some rest, just because her one full time job wasn’t enough for food, not enough for the rent, and not enough for clothes on our backs,” he said. “In retrospect I’m like wow, you hold resentment towards your parents or your family because of certain situations, but now when you peel back the layers, it’s the system of the economics, and my entire family is affected by it.”

This system of economic inequality and the struggles that Shields’ mother and over 220,000 minimum wage workers in the Twin Cities metro area face today, along with how activists across the country and in the Twin Cities are fighting for fair wages and schedules, remind local labor historian, Peter Rachleff, of the 1886 fight for the eight-hour day.

The first Labor Day: A compromise after a bloody struggle for the utopian eight-hour day

According to Rachleff, at the time of the struggle, the eight-hour day seemed utopian, but embodied a sense of justice. “I think those are all things 15 Now is doing today,” he said. “People are making nine and a quarter, $15 seems an enormous leap, but it’s something that is capturing the imagination of workers all over the United States and inspiring people who have never been in the labor movement to see themselves as possible agents of change.”

He also sees similarities in the strategies of the two movements, in that they both aim to impact all workers through changed labor standards instead of solely unionized workers through contract bargains, the latter of which has been the norm since the 1940s. This approach is especially beneficial at the present day, since currently only about ten percent of U.S. workers belong to unions, according to Rachleff.

We’re unlikely to gain another federal holiday out of this movement, however, since Labor Day wasn’t even really founded to remember the eight-hour movement, but to avoid its controversial history.

The movement climaxed during a May 1886 protest, which ended in police and striker deaths, a spark of fear in the labor movement and the creation of International Worker’s Day, which is still unofficially celebrated in the U.S. on May 1. However, there was no official Labor Day until 1894 when President Grover Cleveland offered up the September holiday on the opposite end of the calendar year.

“The September Labor Day holiday has no direct memory of this fight in 1886, although people continue to tell the story, suggest it is why we have the holiday at all, that the holiday was created to incorporate, cool out, radical labor activism,” said Rachleff. “So the holiday is a kind of compromise. But it is an opportunity to remember both the struggle for the eight-hour day and even more generally, all of the things that the labor movement has created and given to people in the United States.”

Labor Day 2015: A celebration of recent progress by local orgs and a reminder that Minnesota still isn’t close to a utopia for workers

Over a century after the eight-hour struggle and the first Labor Day, the holiday is now dominantly seen as the barbeque between pools closing and schools opening. However, for thousands of workers and activists across the state and country, it is a day that marks the growing force of today’s workers’ rights movement and serves as a reminder of the harsh conditions low wage workers still face in 2015.

Kip Hedges was fired from his job as a Delta baggage handler because the company said he made disparaging remarks related to unfair wages. He’s now a leader in the 15 Now Minnesota movement. To him, this year’s Labor day “means something different than it has in the past, which is it can be a celebration of the first time in decades that working people are actually making gains instead of just retreating and trying to defend what they have.”

These gains are being made by the collaboration of many organizations in the Twin Cities, including 15 Now, NOC, Centro de Trabajadores Unidos en Lucha (CTUL), SEIU Local 26, and Working America. #MPLSWorks, a coalition of many of these groups and more, launched a workers’ rights campaign this August.

The collaborating organizations’ original missions range from unionizing janitors and security officers, to supporting non-unionized low-wage workers, to racial justice, but they have all come together in a time of changing definitions of labor to defend all workers’ rights. “The working class has changed, the work people do has changed, and therefore, not surprisingly, the ways they organize and the way they struggle change also,” said Rachleff.

Shields explains that NOC originally came out of the Occupy Homes Movement and has worked on voting rights and police accountability, but is now focusing on workers’ rights because it is a “pivotal moment,” in the movement since “not only is there a narrative and a story being told, but we have the cold hard facts to back it up.”

Minnesota’s labor movement has seen some recent successes as a result of this narrative shift and organization collaboration. Thanks to legislation passed this Spring, Minnesota has the highest minimum wage in the Midwest at nine dollars an hour. In addition, after a long period of increasing reliance on subcontracted workers, falling wages at the MSP Airport and subsequent protests advocating for $15 an hour, around 3,000 low-wage airport workers have gotten a one dollar hike in their minimum wage, raising it to ten dollars an hour.

The search for fair wages and scheduling, paid sick days, and an end to wage theft

Even though Minnesota has seen a small increase in minimum wages, there is still nowhere near a living wage throughout the state. In Hennepin County, for example, two working parents need to each make $17 an hour to provide a no-frills life for a family of four.

Raising the minimum wage is an issue of race, gender and economic equity. According to 15 Now Minnesota’s website, while 28 percent of all Minneapolis residents live in poverty, that percentage is 65 for American Indians, 49 for African Americans and 34 for Latinos. Further, women work the majority of low-wage jobs in Minnesota and across the nation.

“There are so many things that intersect around 15,” said Hedges. “For example, if your parents have to work two or three jobs and they’re never around, kids will probably have some behavior problems that schools have to deal with. There have also been all sorts of studies that show if you increase the minimum wage, health problems, like blood pressure, obesity rates go down. And, of course, all those health and education problems disproportionately affect people of color, single mothers, etc.”

Other mental and physical sacrifices also come with working low-wage jobs, especially ones that don’t have fair scheduling practices.

Rod Adams worked two jobs as a full time student. At Chipotle, he would often be scheduled to work both the closing shift until two in the morning and the opening shift the next morning at seven-a practice sometimes called “clopening”. “It was really hard for my mind to handle all that stress,” he said. “I had to work, then go home and do homework and go to class and take all of this information in and it was really draining. So I feel like paying a living wage of 15 dollars would actually exponentially increase people’s livelihood, give them the opportunity to have time, not only to have fun, but do other things that they’re interested in.”

Lennox Thornswood works at Target, where her schedule and number of hours change every week. “Any hour that the store was open was free for them to schedule me,” she said. “It’s impossible to make plans with people. I can’t have any consistent appointments or things I have to go to because my schedule is inconsistent from week to week.”

She continued, “I’d often have nights where I’d close the store at 11 at night, and they wouldn’t let me out the two minutes earlier I needed to catch the bus, which only ran every half hour. So I’d be stuck by myself in downtown Minneapolis at night, which was scary as a woman.”

Other issues Twin Cities activists are working on are wage theft (when employers don’t pay employees for hours worked) and a lack of paid sick and safe days. According to a NOC survey of around 550 North Minneapolis residents, sixty percent of surveyed workers did not have paid sick days. This number was even higher for retail and food service employees. This lead to ten percent of them leaving a job because they or a family member had fallen ill.

In addition to their experiences with unfair labor practices, another thing Thornswood, Adams, Hedges, and Shields all have in common is their Labor Day plans: organizing to better labor standards.

This story is part of a Daily Planet series on low-wage workers and the Twin Cities labor movement.