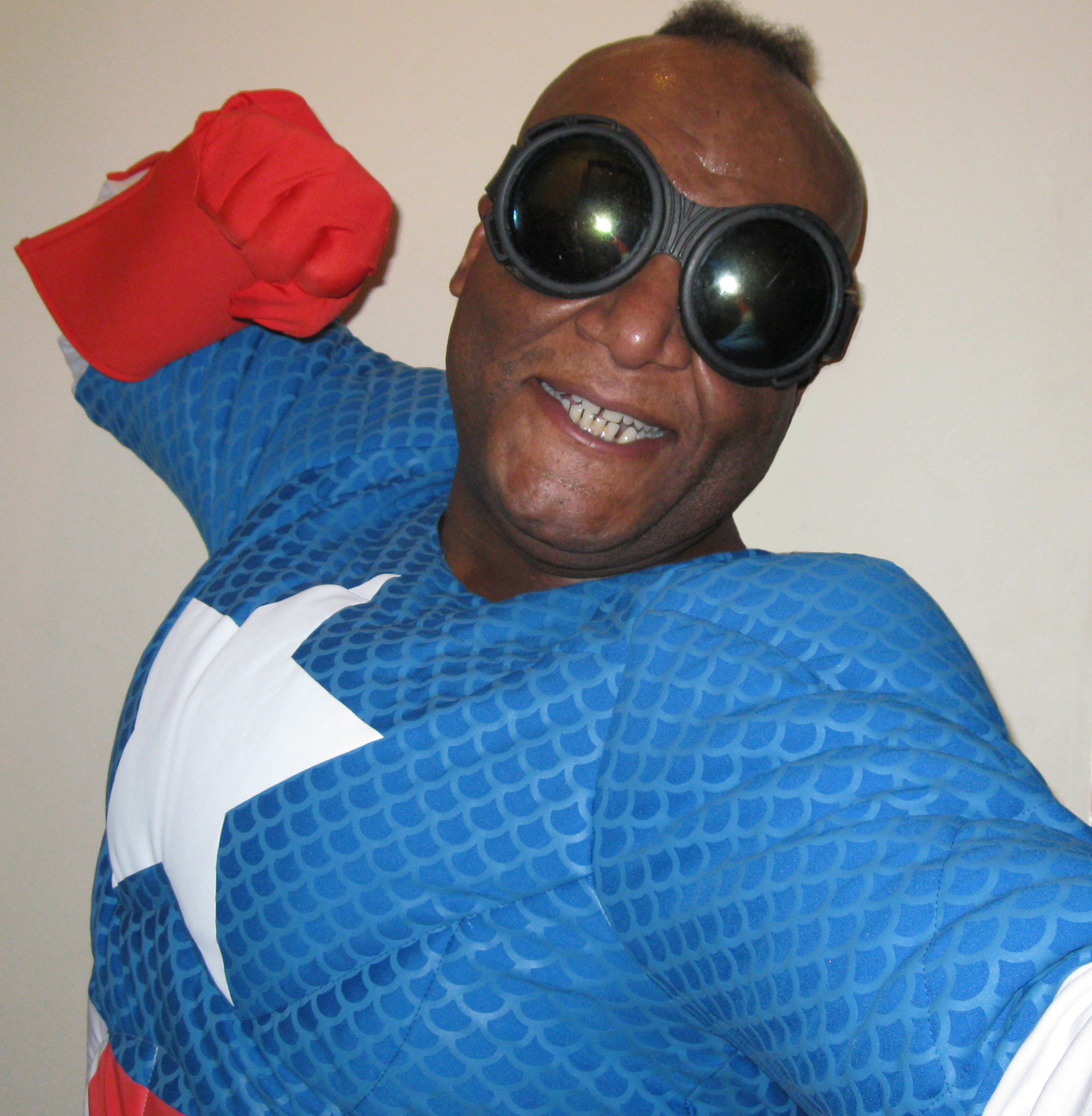 Mom knew I was interested in seeing Uncle Tom’s Condo from Milliepadd Productions because of Greg Nesbitt’s charming preview performance at Fringe-For-All. Despite that evidence and the show description…

“Do you sound white on the phone? This and other complicated questions can only be answered by this hilarious send-up of social and racial attitudes and how they “color” our world. Can these things be solved in less than an hour? We’ll see. “Uncle Tom’s Condo” uses the opportunity of live stage to advance the emotional resonance of our country’s ongoing struggle with racial, gender, and now, sexual equality.”

…we honestly didn’t know what to expect beyond the song (video below) (which it turns out is the closing number for the show).

Like the superhero band that sings that last song – with the cast dressed up as Captain America, Spiderman, Superman, Wonder Woman, and the queen of the Amazons on Paradise Island – Uncle Tom’s Condo is a strange mix of different styles of entertainment that all gather under the umbrella of the subject matter of diversity. Some things fit more comfortably under that umbrella than others. The reason I recommend it as highly as I do is that when Uncle Tom’s Condo brings its points home most effectively, it does so in a way that I can’t imagine too many others replicating, and in a way that furthers a discussion we all need to continue having.

If anything, this genial production runs the risk of, rather than taking its subject too seriously, perhaps not taking it seriously enough. Everyone in the cast is so well-adjusted about dealing with various forms of prejudice and discrimination, that the anger and the bite to the humor that always seems to be lurking just beneath the surface is never allowed to fully manifest itself.

The production also sets up a false premise at the start. There is a timeline of racial history in America, threaded together alongside touchstones in pop culture (an example – Medgar Evers and Malcolm X are murdered, Star Trek and Batman premiere on TV). This timeline leads to the birth of Nesbitt himself, and from there the history shifts to key moments in the development of his own racial awareness. But it also detours to things which have nothing to do directly with the subject at hand (an example – his father dies of cancer around Christmastime, Nesbitt stops believing in both Santa and Jesus) (And that’s a whole other Fringe show I’d actually be curious to see).

But because of this biographical trip through time, the production gives the impression that it will be sort of a one man show with a supporting cast. The reality is that the whole thing is more of a variety show, with each cast member – Mark Beck, Jo Mary Fahey, Mahmoud Hakima and Kirsten Stevens – delivering their own multicultural awakening moments throughout the evening in between the comedy sketches.

The most effective sequences are the ones that are allowed to breathe. Uncle Tom and Uncle Ben (of converted rice fame, carrying a box of his product with his smiling face attached) sit down and have an honest and amusing chat about the changing fate of their characters in society over the years. Nesbitt is called into human resources along with all his other black co-workers to have one-on-one discussions about a troubling racial incident on the job. Nesbitt rightly points out that only the black people are being called in to be asked how they feel. “I don’t see you calling all the white people in and asking them if they like beating up black people.” When Nesbitt asks how it feels to be a woman in the same workplace, that sets her off on a humorous rant of her own.

The things that are less effective are the things that leave us wanting more. There is a passing reference in the timeline made when the vocabulary for dealing with minorities changes. Slaves become colored people, colored people become blacks, blacks become African Americans. A comedy of semantics that only this cast could do justice to seems to be asking to be birthed here, but it doesn’t happen. There is also an incident when Nesbitt offers to give Beck a late night ride home after rehearsal for their rock band, and suspicious police circle around and come knocking on their car windows before they even have a chance to get the car started. Beck, the white man, starts to get indignant, while Nesbitt keeps his cool and lets it pass. He doesn’t agree with the officers’ assessment of the “suspicious” situation, but he doesn’t mouth off either. While this subtly speaks to years of experience dealing with these sorts of nuisances, and is nicely played, I found myself wanting to know more about the history of where that coping strategy came from.

Though the aphorisms and jokes are amusing, and the personal monologues engaging, as far as they go, the group seems talented enough to take the whole concept so much further. Maybe they ran out of time. Maybe the lessons learned from this production will bear fruit in future theatrical outings. As it stands, Uncle Tom’s Condo is an amiable, enormously accessible production about a subject that many still find touchy to talk about.

Uncle Tom’s Condo wants you to know that it’s OK to talk, and OK to laugh. How else is the really ridiculous stuff we all still put each other through ever going to change?