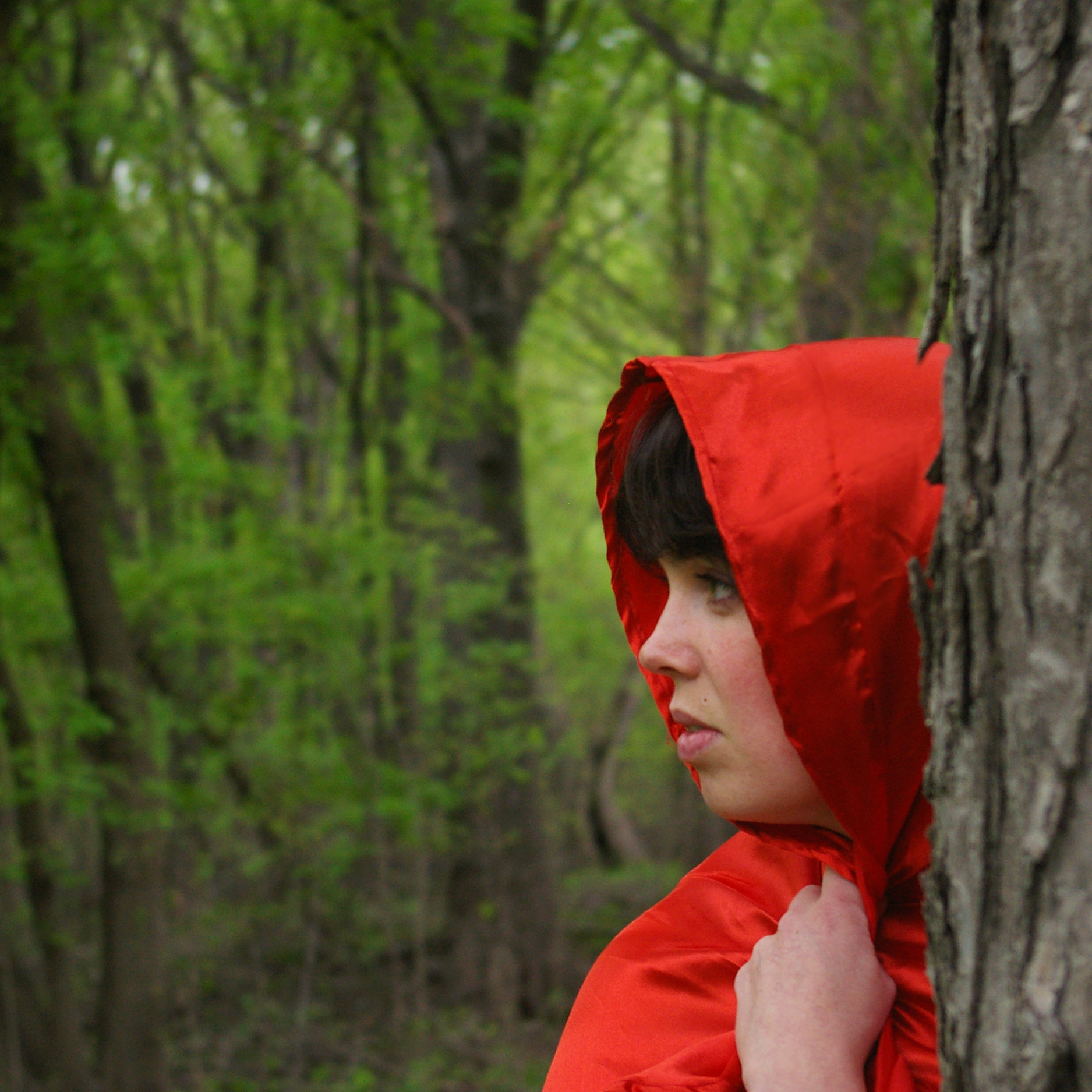 Well, it took me 37 shows but I’ve finally seen one that I’d really like to see a second time. It’s also one that everyone else should see if they love good theater.

(And Red Resurrected nabbed the encore slot at the Lab Theater as the most popular show at its venue, so I get my wish of being able to see it again. That’s where I’ll be come 8:30 this evening.)

“Every so often, a woman finds a path in the darkness.”

I was starting to think it was me. Maybe I was just tired. But other people I’ve talked to, including my Mom, have been feeling the same thing. If you ask someone what they think is good in this year’s Fringe, they can rattle off a good half dozen names, and then come up with a couple more besides. And you’re bound to hear some different names every time you ask the question. The overall level of work in this year’s Fringe is really exceptional.

But if you ask somebody, “What is the one show I absolutely have to see?” there’s a pause. Because while the overall level of quality is exceedingly strong, there really haven’t been that handful of shows that pop up above all the rest. Shows that a friend of mine described as the kind you get “evangelical about. Grabbing people by the lapels and saying, ‘you must see this show.'” A lot of us are fans of a lot of shows. But missionary zeal on behalf of something you’ve seen, that was lacking. Too many good shows, that’s a good problem to have. Not having that one or two “great” shows? That makes a Fringer kind of wistful.

And that’s how I was feeling, until I saw Red Resurrected.

“Sometimes it feels like your heart is as rough as your hands.”

Director Isabel Nelson’s Red Resurrected is just the sort of follow-up we’d expect from her after her fantastic Fringe outing last year, Ballad of the Pale Fisherman (which I was excited to learn will be remounted in an expanded form as part of Illusion Theater‘s Lights Up series this winter. If you missed it before, or want to see it yet again, make sure you keep an eye out for those dates.)

Just because we expected great things from this director and her ensemble, however, doesn’t mean I was prepared for just how great it was going to be.

Talking to another friend after the show (who’d unfortunately missed Fisherman last year), I struggled for words to describe both productions.

“Fisherman was great, one of the best shows I or anyone else saw last year. But this, Red Resurrected, it’s just astonishing,” tumbled out of my mouth.

Also at a loss for words, my friend said, “That’s a really good word for it. Astonishing.”

That’s a word I haven’t thrown around much yet this year. And if any production deserves it, it’s Red Resurrected.

“Everything looks the same. Every step you take is further from where you started.”

Problem was, I was resisting it ever so slightly, even though I knew I shouldn’t. Because Red Resurrected was one of what seemed like an army of Fringe shows this year all picking apart fairy tales in various ways. Intellectually, I knew based on past experience with Fisherman that Red Resurrected would be different. But it was still a little hard to get excited about “one in a series.” Glad I finally got over that and got out to the Lab Theater to see for myself.

The advance buzz didn’t surprise me. Their Fringe-For-All preview (below) promised another solid, ensemble-created work. Boy, did they deliver on that promise, and then some.

“Don’t lie to me. That’s the devil in your mouth. Wash it with something holy.”

The reason it’s so hard sometimes to put a production like Red Resurrected into words is that so much about the production is about what’s not spoken. The words not said. Things seen. Things unexplained. The blank spaces between what people say and do that load everything with so much subtext that you think your brain might explode. It’s great to be swept up in a story like that, to be invited in, to be asked to follow along and use your common sense. “You know what’s going on here,” the show seems to say. “I don’t really need to explain it, do I? Just watch. Trust your eyes and trust your gut. You know what’s going on here.”

Red (Adelin Phelps) is a young girl with no parents, so she is raised collectively by the people of her mountain village by the woods. There’s the kindly Mr. Oak (Diogo Lopes). There’s the flinty, unforgiving Mrs. Quinn (Heather Bunch) – who has a doozy of a secret I won’t spoil. But mainly, there is the Cooper family – Mr. Cooper (Derek Lee Miller), a woodsman; Mrs. Cooper (Allison Witham), and their son Tommy (Willie Gambucci), Red’s age. The town all loves Red. But as Red grows into a young woman, some people love Red a little too much. Mrs. Cooper of course loves having Red around as the daughter she never had. Tommy and Red have an easygoing rapport between the two of them that seems to promise something more in the future. But it is Mr. Cooper who inadvertently sets Red’s larger journey in motion.

“Man gets enough maple he can building anything he wants to. Last him the rest of his life.”

Around the edges of Red’s story is the story of another woman, who is also our narrator (Anna Reichert, the leading lady/selkie in last year’s Fisherman). This other woman also wandered off into the forest, as Red longs to do. The woman’s disappearance, and reappearance, caused the town much hardship. But you’re not quite sure she’s real, until Red comes face to face with her in the woods herself. The woman gives Red shelter, when the rest of the town has turned against the young woman, and helps Red to discover her own powers of healing. (The scene where Red heals an injured wolf, played by Miller, is wordless and magical to watch.)

The ensemble isn’t just playing people here. They are the trees in the woods, the rooftops of homes, the fire in the fireplace, the leaky sink and flaming stove in the kitchen. These seemingly lifeless things have a voice beyond human speech, and watch the doings of the humans living among them intently. They are a Greek chorus of eyes rather than mouths.

Everything the story needs – characters both human and animal, location, props, sound – the ensemble creates out of thin air with nothing more than their bodies and voices, and a simple costume for each which never changes. Sometimes ensemble-created work can be a mess. Too many people with too many great ideas and no filter, no outside eye or guiding hand. Director Nelson sits outside the story, taking the best of what her ensemble has to offer and helping to shape it into a lean, beautiful piece of storytelling.

Something as monumental as the passing of time can be conveyed in the subtlest of moves. Red and Tommy start out as children. When they grow up into young adults, a change in voice and a change in the way Phelps and Gambucci carry themselves, the way they live in their own skin differently, conveys volumes without anyone wasting time on clunky exposition.

“Sometimes there’s a darkness in this world no matter where you turn. Some things you just can’t save.”

Ballad of the Pale Fisherman and Red Resurrected both center on strong female characters, but in different ways. Fisherman was a story of love and community found and then lost, and the sea was ever present. Red Resurrected, on land rather than sea, in the woods of a mountain town, is also about the loss of community, but rather than love being the catalyst and central concern, here the tale is more about how Red finds herself as a person, separate from her town and extended family, as she transforms from a girl into a woman.

Red Resurrected is such a rich, full evening of theater, though, that words can’t really do it justice. Like all the best live performance, you need to be in the audience to experience it. I liked being part of that experience so much, I’m going back for seconds. And as anyone who reads this blog will tell you, that kind of thing doesn’t happen much, at Fringe time or any other time of year.