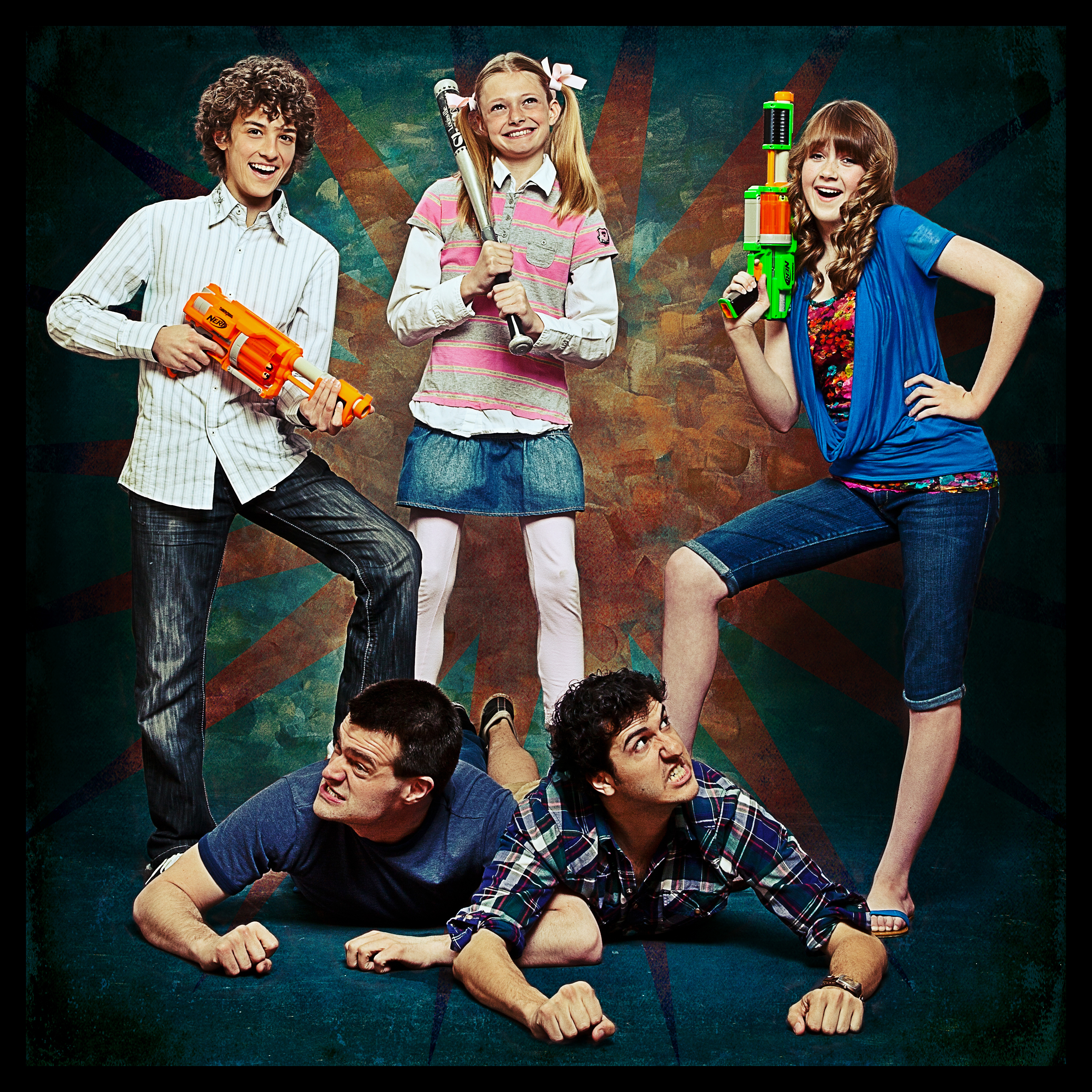 Is it possible for a Fringe show to be *too* funny? If so, then Our Freaking Kids Show is perhaps the guiltiest of this crime at the Fringe this year. And it is a crime I am most glad that they choose to repeatedly commit (their voluminous audiences would seem to agree with me). Man, do I want to hate Josh Carson (writer/director/producer/actor – the Me of Mainly Me Productions) for being so talented. And just as soon as I stop laughing I probably will.

“Improv! Give me location.”

“That’s not a location!”

The first thing that struck me while waiting in line and then taking my seat in the audience, though, was, “Why the heck is everybody bringing their kids to this show?!” Have they not seen the trailer…?

Yes there are kids in the cast but… OK, the more I think about it, there isn’t any swearing, there isn’t any sex, there isn’t any violence or gore. Sure, the humor seems adult to me, but the artists involved do tag the thing for ages 7 and up, so… I’m being an overprotective non-parent, underestimating the sophistication of younger audience members. My apologies. If I think it’s this funny, why should I deny anyone the chance to see it and have fun, right?

“The only way I know to make a girl stop crying is to propose. And that didn’t work out so well the last time.”

The jokes fly fast and furious as a group of frustrated theater artists – Carson, Greg Eiden, Andy Kraft & Kendra Ryan – get tired of playing to audience numbers in the single digits, for negative returns on their investment and decide to sell out and create their own work of children’s theater. Of course this idea goes horribly awry as they run afoul of leggy, gorgeous interns (Sara Lahti), over-invested stage mothers (Rita Tredal Black), the local children’s theater guru Uncle Lonnie (Dan Hetzel) and his devoted sidekick Twink (Rachael Davies). Not to mention the fresh hell of working with (gasp) child actors – the overly enthusiastic Lexi (Lexi Johnson), the commercial actor juggernaut Tucker (Tucker Garborg), and the irresistible moppet Sophie (Sophia Feller).

“I’m impossibly hot and it’s like it doesn’t even matter. We’re people, too!”

Carson and Kraft (who also helped conceive the story) are characters who are barely more than children themselves and end up in competitive performance situations with their child co-stars that put their fragile adult egos at stake. Carson and Kraft also continue goading the relentless Uncle Lonnie into ever more desperate acts of sabotage. The fact that their script, by Kendra, changes almost hourly probably doesn’t help. Nor does it aid their cause that Greg the director on the project needs to be regularly medicated with special “European water” (vodka replacing water in those ever-present plastic bottles) to keep him from turning into a raving dictator on stage.

“Oh honey, dating is going to be so hard for you.”

That the adult and younger actors are equally game to look foolish is a huge plus here. That the younger actors not only hold their own on the comedy front, but meet their adult sparring partners line for line with the pace never flagging, is something for which they all deserve special credit. It’s a big part of what makes the whole affair so funny from top to bottom.

“Kids are house arrest. They’re poison to your social life. They’re like dogs, only you go to jail if they die.”

The script is wickedly funny, and one of those shows that you almost have to go back to a second time to catch all the jokes. There are just too many of them, flying past your head at lightning speed in rapid succession, for anyone to process them all in one sitting. It’s the kind of show where I’m furiously scribbling down one punch line, only to have a half dozen others zip right by me. No human fingers can keep up. There are relationship and theater jokes that anyone can appreciate, and then there are several different levels of still more theater jokes that different crowds will appreciate to different degrees. It’s a hoot, and a totally accessible one, no matter what kind of theater geek you are, or aren’t. And I defy anyone not to end up grinning like an idiot during the big, goofy dance number at the end (or for that matter the big, goofy dance number in the middle).

“I am not going back to the temp agency. I will slit my wrists and make it look like a paper cut, I swear.”

As Mom said on our way out of the theater at then end of the show, Our Freaking Kids Show is just fun, start to finish.

(And Josh, I hate you. Just as soon as I stop laughing.)