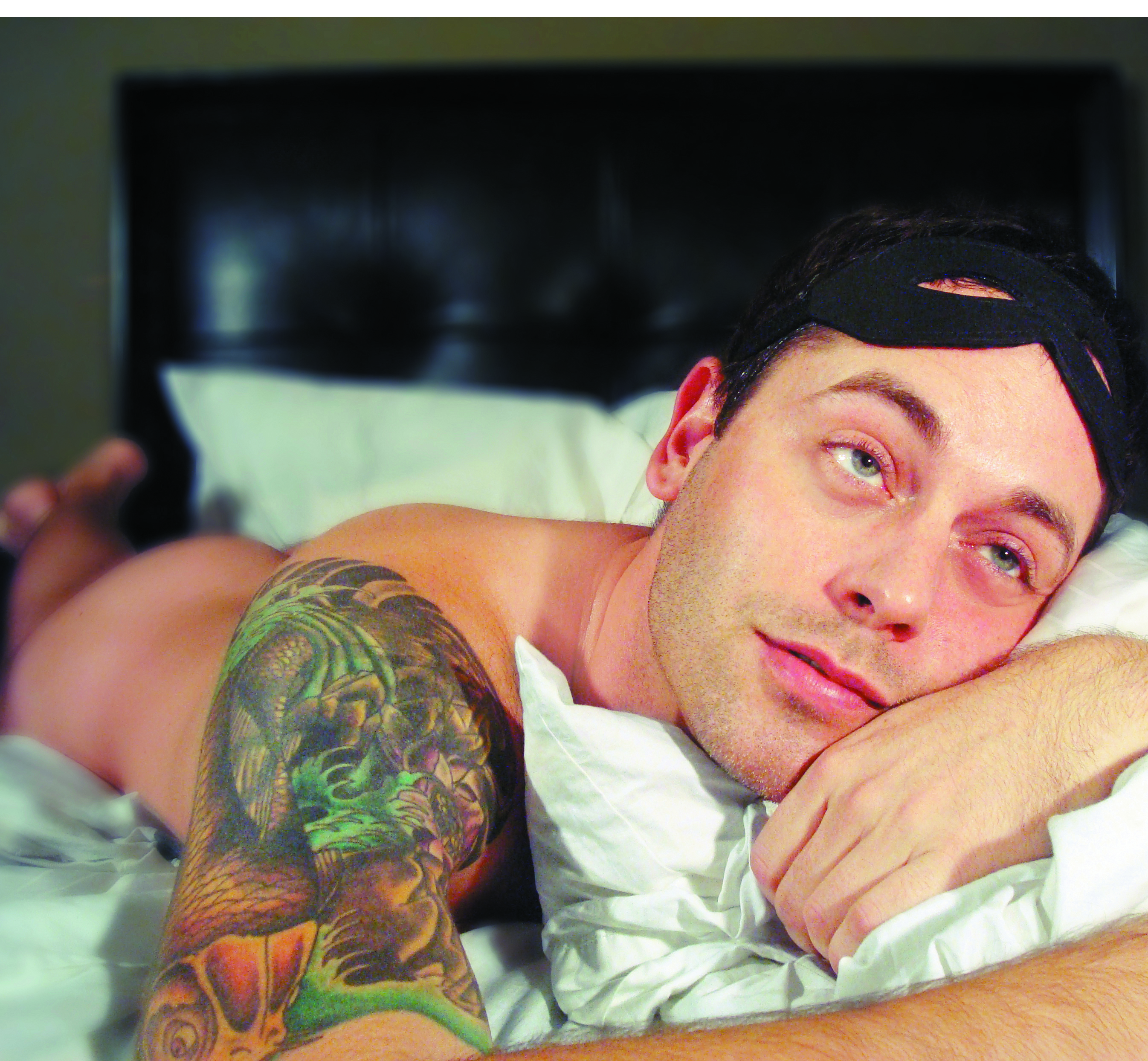 “Mom, this is the Fringe, nearly all the guys are good-looking. You’re going to have to narrow it down.”

“Good morning,” Kevin said at 1:00pm. “This is really early for me. I’m not normally conscious until at least noon. Is the f**king bar open?! (yes) That is so wrong… well, unless there are gays in the audience, in which case they all just came from brunch so we are ready for that sh*t.”

The guy knows how to work a crowd. And flirt with a crowd.

He’ll elicit a sentimental “aaawwww” but immediately undercut it with a wicked joke.

The singing and guitar playing are extremely seductive (and often funny as well).

Really, I’ve gone on at length about just seeing him in preview. Kevin J. Thornton is kind of my kryptonite this year. (There’s always one.) We have a lot of the same pop culture milestones in common, so that’s not helping (“A reference not for everyone, just a sad few.”)

The word “brazen” floats to the front of my mind. So do the words “morbid” and “mischievous.” (“I like to rewrite all my memories so I have something poignant to say.”)

Kevin J. Thornton is that guy at the party who always has the good story. OK, sometimes maybe he overshares, but it’s always at his own expense and not that of others. And he’ll make a joke out of it to defuse whatever discomfort might have arisen from the subject matter. He says the things you’d never have the nerve to say but wish you did. He does the things you haven’t done (or at least not in a while), but the kind of things you still wish you had the strength and resilience to bounce back from. I don’t think he’s afraid of anything but being boring.

He’ll let you see the strings. He’ll stray into new material but tells you so, so that you won’t let him off the hook when he tries to back away from it. (“We’re past the point of no return on this bit at this point, aren’t we?”)

He’ll talk about his days in a Christian rock band during youth group church lockdowns (“Don’t have sex. Think about Jesus. — Can’t sleep. I’ve had a boner for six hours. Thanks, Jesus”).

He’s willing to fight to keep politics and sexuality separate (“My sexuality is not the same as your alcoholism. I know. I’m both. They’re different.”).

He’ll play with the strangeness of language. (“If we use food metaphors for sex, why can’t we start using sex metaphors when referring to food? ‘You gonna fuck that sandwich?'”)

And he’ll tease the audience (“Which one of you is gonna f**k me tonight?” We’re Minnesotan, no immediate response. Then a woman in the front row raises her hand. Kevin considers this…)

The songs are alternately funny and cynical and romantic. (And available online, and yes, I’ll be downloading later.)

This review is about as random as Kevin’s show but far less coherent and entertaining. Apologies. With luck, though, it will convince you to go see his naughty little Fringe show, for that is my purpose. I Love You (We’re F*#ked) is like having Kevin J. Thornton’s undivided attention focused on you for an hour (you just have to share it with 50 other people). Hey, if those blue eyes wander over my way once or twice during the course of the show, I’ll consider that worth the price of admission. Mom will also say to any who will listen that Kevin is attractive to both the men and the ladies alike. Back of the line, Mom. I saw him first.